Consumer irritation with fees, coupled with poor service and unmet expectations, has fueled increases in defection rates among customers of large, regional and midsize banks, according to the J.D. Power & Associates 2012 U.S. Bank Customer Switching and Acquisition Study.

The study, now in its third year, examines the bank shopping and selection process, finds that 9.6% of customers in 2012 indicate they switched their primary banking institution during the past year to a new provider. This is up from 8.7% in 2011 and 7.7% in 2010.

Among big banks, regional banks and midsize banks, defection rates averaged between 10.0% and 11.3%, while the defection rate for small banks and credit unions averaged only 0.9%, a significant drop from the 8.8% number seen in 2011.

BofA, Wells Fargo and Citi lost an aggregated 1.5% of their customer deposits. Previously, BofA had said the rate of customer defections increased 20% during the fourth quarter of 2011.

Roughly half of the customers leaving a large bank in the past year ended up moving their money to another large bank.

Not all big banks suffered. In fact, J.D. Power was stunned by how well several big banks were able to acquire new relationships.

“In light of the Bank Transfer Day promotion, I expected a decline in acquisition,” admits Michael Beird, Director of Banking Services at J.D. Power & Associates. “But three of the top six banks actually improved in acquisition.” 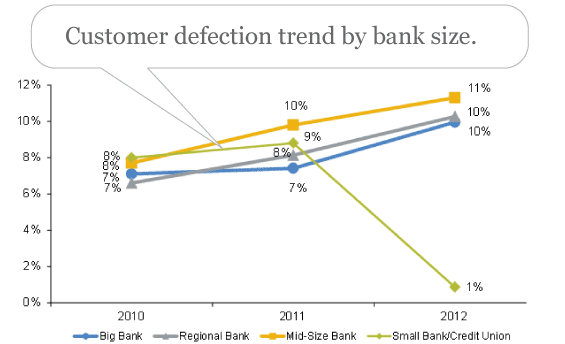 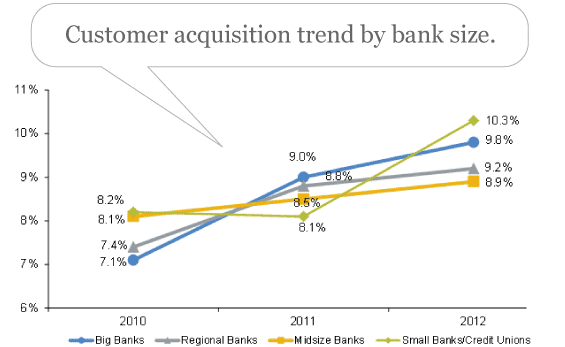 “If customers are getting poor service, it exacerbates the fee issue,” Beird observes. “On the other hand, if the service and products exceed customer expectations, fees become less of an issue — like Frost Bank or AmericanExpress.”

“But that will come slowly,” he notes.

All financial institutions need to keep their eyes peeled for signs of unrest and potential defections.

“Problems and complaints are a critical indicator,” Beird points out. “Customers who have had at least one problem in the last twelve months — fees, service issues, transactional problems, etc. — have a higher inclination to switch banks than those who don’t. Following up with those customers is key.

When asked if the factors that drive consumer away become the same criteria they use to evaluate new banking providers, Beird says yes… and no.

“There is some alignment, but customers leave for multiple reasons and then reassess what’s most important in selection criteria,” Beird explains. “For most big banks, customers choose them for the convenience factor, i.e. branches and ATMs. For smaller banks, it’s for better service and lower fees.”

Switching From Defense to Offense

Not all financial institutions are fighting a purely defensive battle against switching and attrition. Some banks and credit unions smell opportunity, and are aggressively pursuing new relationships. But Beird warns against relying too heavily on promotions to lure new customers.

“Promotions work, but only in the short term,” Beird cautions. “Customer loyalty is thin when customers move for promotions or incentives.”

Beird thinks smaller banks and credit unions would have more success if they concentrated their marketing at consumers’ life stages — things like moving to a new city or changing jobs.

“Catching people going into life changes, rather than those who just went through them, is a way of seizing opportunities and prospects,” Beird advises.

For those in the banking world hoping for more clarity about the impact of Bank Transfer Day, the J.D. Power study will be of little help. The company had already initiated its research project in the field by the time BofA’s debit fee brouhaha exploded, so they were unable to gauge the role and impact of Bank Transfer Day on switching behaviors. However, fees were a key central theme in J.D. Power’s findings.

“The focus on fees as a shopping trigger would indicate there was a strong alignment to the issues that drove Bank Transfer Day,” Beird speculates. “However, if consumers were satisfied with the way their bank treats them, it was fairly clear they would not leave simply over increased pricing.”

J.D. Power’s data indicates that more than half of the people who cited fees as their reason for shopping also described their former bank as having poor service.

“In many ways, these customers were likely looking for a reason to cut the strings and would have done so eventually,” Beird adds. “Bank Transfer Day seized the moment of frustration because customers were upset over bank experiences that did not meet their expectations or satisfy their needs.