For the last five years straight, survey after survey put banking at the bottom of nearly every list — from the industry that’s least trusted to least believable, ranking the financial sector lower than other historically loathsome industries like big tobacco. By any measure, banks’ reputation scores have either continued to plunge or held at dismally low levels… until now.

Finally, there are signs consumers’ intense ire for banks may be starting to ease. Gallup surveyed a random sample of 2,013 adults, aged 18 and older, living in all 50 U.S. states and the District of Columbia, between August 7-11, 2013. There was only one question: “For each of the following business sectors, please say whether your overall view of it is very positive, somewhat positive, neutral, somewhat negative, or very negative.”

33% of consumers felt positive about the banking sector, but 43% gave the industry a negative rating (22% were neutral). That still leaves banks with a net negative reputation: -10% difference between those with positive vs. negative perceptions. However, this net -10% difference is the best the banking industry has seen since 2008, offering bank executives the first glimmer of hope they’ve seen in over 16 consecutive quarters.

Americans’ Ratings for US Industries

Seven industries — including banks — showed net gains of more than 10 points from 2012 to 2013. Banks showed the largest gain with an 18 point jump from year to year.

Healthcare is the only industry to see a decline of at least 10 points, although the retail, computer, and pharmaceutical industries were close to that threshold 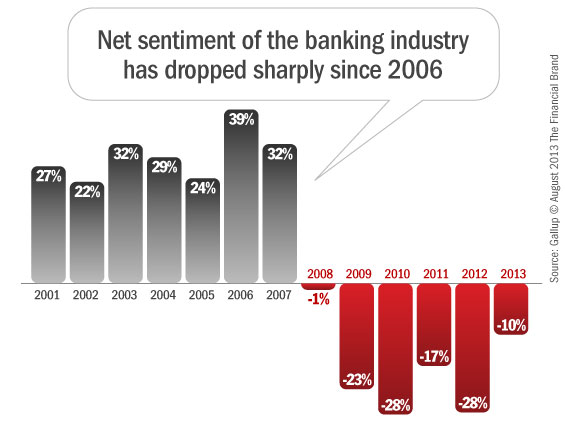 It’s not like American always hated banks. In fact, from 2001 through 2007, U.S. consumers had a rather rosy attitude toward financial institutions, giving banks a net positive rating that consistently stayed above +22%, cresting at a high of +39% in 2006 (in other words, only seven years ago, the difference between those who liked and disliked the banking industry was +39 percentage points in banks’ favor).

But as the Great Recession set in and the magnitude of the worldwide financial crisis became apparent, the banking industry plummeted from its net positive peak of +39% to a frightening -28% in 2010 — a full 67-point nosedive in only four short years.

Even though consumer perceptions of the banking industry may be improving, there isn’t much cause for celebration, at least not yet. Banking may not be at the bottom of the list anymore, but the sector is still near the very bottom. There are only three other sectors consumers think less of: the oil and gas industry, the federal government and healthcare.

It’s not like banking is disliked simply for being a necessary “utility” either. Other highly commoditized sectors scored better than banks, like the telephone industry and power companies. Even the much-maligned airline industry managed to scrape out a +8% positive rating, 18% better than banks. Sheesh, Americans think more of lawyers than they do of bankers, which speaks volumes about the hurdles financial institutions still face in their battle to rebuild goodwill with consumers.

Reality Checks: Gallup says a broader improvement in the economy and increased consumer confidence may be behind people’s more positive perceptions of the banking industry. It takes years to build trust, but only a split second to destroy it. Rebuilding trust gets harder each time it’s lost.