Negative advertising. Consumers say they hate it and it isn’t effective. Political campaign managers would disagree, and they have the results to back it up.

Similar to politics, one could easily conclude that bank bashing is the only kind of advertising that works in the financial industry. Look at marketing campaigns from many credit unions and some banks, and you’ll find all kinds of derisive, snide digs against competitors. Banks have become the proverbial punching bag — favorite targets of challenger brands in the financial industry like Simple, Zopa and Ally.

There’s a fine line between a switching promotion and a bank-bashing campaign. Obviously credit unions are targeting bank customers, so it makes sense to hit the pain points people feel with their current provider. But saying “we’re not as bad as those guys” doesn’t necessarily mean you’re any good. You could still suck… just not as much.

“An edgy anti-bank message can work well in social media marketing, but only if it also conveys a better alternative from the company behind it,” writes Jeremy Quittner for Bank Technology News.

“Credit unions need to tread lightly if they are going to do bank bashing, and they better be able to look in the mirror and prove it does not apply to them as well,” says Tim McAlpine, CEO of Currency Marketing.

Matt Monge, VP of People and Development at Fort Campbell FCU, agrees. “I’m just not sure it’s fair for us to declare so authoritatively that we in the credit union world, across the board, offer better service to our members than banks do to their customers.”

“Let’s provide them with those compelling reasons to join us. And let’s leave the outright bank-bashing nonsense behind,” Monge urges.

“These negative efforts do very little to emphasize the benefits of a credit union,” says Kevin Lynch, a banking and technology executive.

“Regardless of whether or not bank-bashing keeps with the image that credit unions like to think they project, I have this question: Has any credit union actually tested with consumers whether or not they respond positively to that type of message?” Ron Shevlin, Senior Analyst with Aite, asks skeptically. “My guess is that the credit unions running bank-bashing campaigns are satisfying their entertainment needs, and not necessarily doing smart marketing.”

“Credit unions can’t rely on messaging and positioning statements to improve their competitiveness. They’ve got to make tough choices about the products and services they offer,” says Shevlin.

“Financial marketers like portraying each other as sneaky, greedy, self-serving, mean, old farts.”
— The Financial Brand, 2009

In 2009, The Financial Brand published an article questioning the industry-wide impact of bank-bashing campaigns. “The problem is that when so many financial institutions collectively send the same, consistent message — ‘the other guy sucks’ — consumers just lump everyone in the same sucky category,” the article pointed out. It’s partly why people tend to think all banks serve the same flavor of dog food.

How can financial institutions rebuild consumer trust when so many of the industry’s own marketing messages say bankers are untrustworthy scum?

The homepage has four one-minute videos with first-person, man-on-the-street style testimonials from bank-bashing consumers. There are two other sections: Facts and Links. The “Bank Schmank” campaign includes offline components like radio and outdoor. Oddly, the billboards don’t include a link to the BankSchmank.com website. 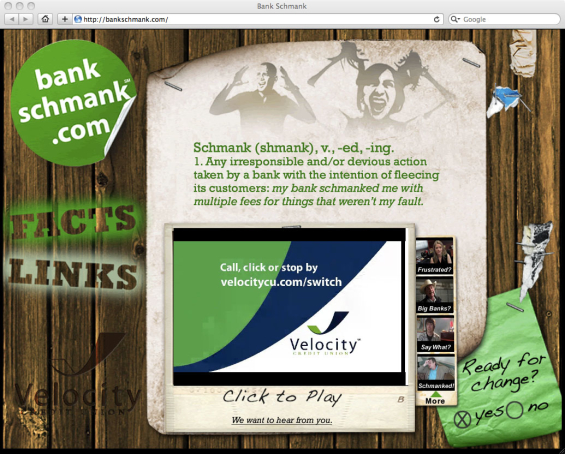 A two-minute parody of big bank clichés. The video, produced in-house by the credit union’s marketing team, set off a fiery debate among industry observers when it came out. Some felt the video’s title was offensive and its intent mean-spirited. Others suggested that Summit Credit Union might be the pot calling the kettle black, since the video makes fun of bank fees when the credit union has some suspect fees itself.

“Bankitis is a common ailment among people who belong to banks,” the credit union explains on its website. “Common side effects include extreme levels of frustration, indigestion, the urge to say things like ‘there’s a fee for that?!,’ the feeling that you’re no more than a number, and constantly wondering if your money is in the right place. The good news is, there’s a cure!” The site has a blog, contests, videos and tips from Dr. Penny, the credit union’s fictional spokeswoman who can help cure Bankitis.

In this video parody, a man who introduces himself as “a bank” then outlines his anti-consumer strategy and list of fees. “I know you’re angry with me, but what are you going to do about it?” the banker asks rhetorically.

“At the end of the day, it does show what we believe to be some clear differentiations between banks and credit unions,” Powers explained.

“At the very least, it shows our take of what the perceptions of those differences are from the consumer’s standpoint and of course, it is meant to call people to action and say to themselves, ‘Why am I still banking at a bank?’”

Lipstick on a Bank – University of Kentucky FCU

“You can put lipstick on a bank, but it’s still a bank.” A campaign including billboards and a microsite oriented towards switching. 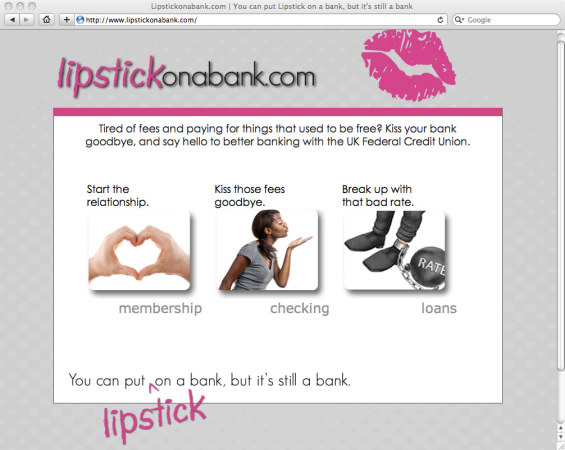 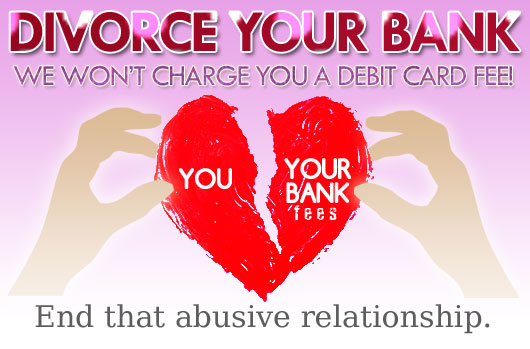 A goldfish named Bob is unhappy about his bank. In this 30-second TV spot, Members Advantage promises “no hidden fees.” They use the tagline www.WeRNotABank.com as a marketing URL. 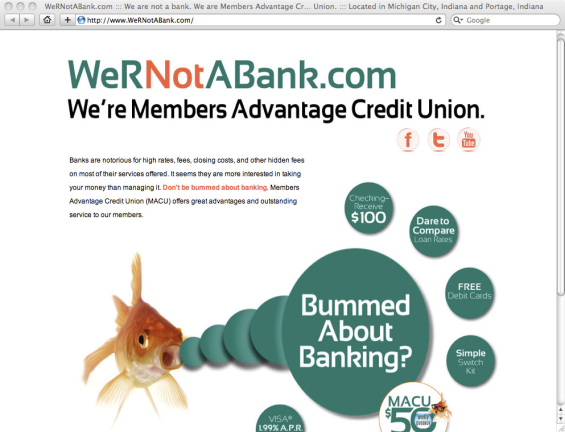 Unlike Your Bank – Allegacy FCU

In Allegacy’s first-ever television commercials, they chose humor to attack the painful banking scenarios — everything from skyrocketing interest rates to unexpected and unnecessary—fees on services that used to be free. For those who have yet to experience the credit union difference, there will be no mistaking that Allegacy is “unlike your bank.” 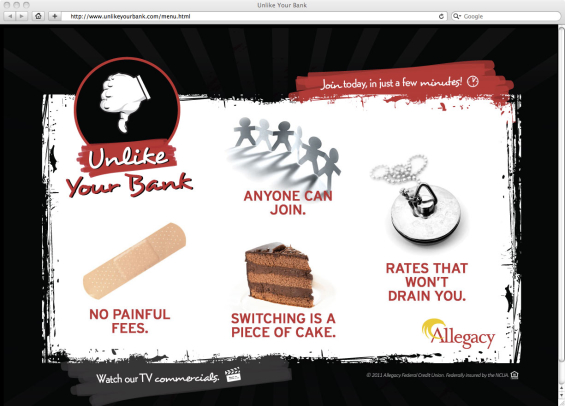 “Let’s be honest. There’s really no other explanation for the way banks behave. They don’t like you. Whether they’re gambling with your money, insulting you with their rates, squeezing you with fees, or just making you feel like old chewing gum from the moment you walk in the door, the conclusion is unavoidable.”

This campaign from a credit union industry group includes a microsite. The Facebook page has generated around 500 ‘Likes.’ Meanwhile over at Twitter, you can find tweets such as: 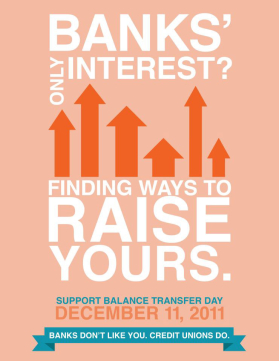 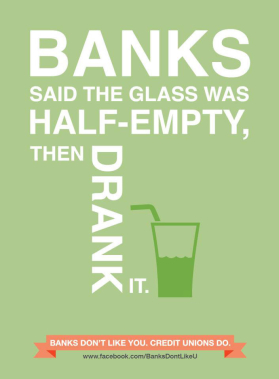 Ditch Your Bank – Affinity Plus FCU

The heart of the campaign is a racy spot staged in a stuffy, traditional bank where all the customers are wearing nothing but their undies. “At banks, people don’t just lose their shirts,” the announcer says. “They lose everything, right down to their underwear.” It’s been viewed 36,681 views, with many thumbs-up votes. 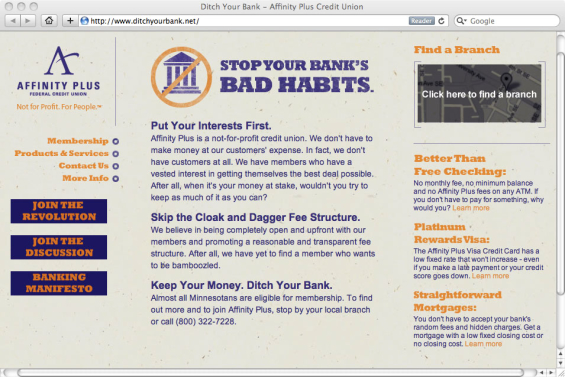 There’s also a Bankziety Facebook contest asking Minnesotans to share their stories of banking anxiety, money stress, or how credit unions have been the bankziety cure. Up to 12 entrants will win cash prizes and gift cards, with the top four entrants awarded $2,000 and a chance to tell their stories as part of a video series. 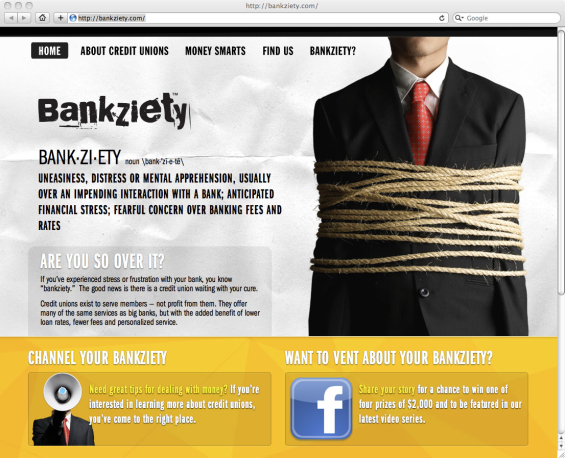