Already operating a 'small' branch network in comparison to its megabank rivals, Citibank could plausibly be expected to refocus its attention away from in-person banking. Yet the opening of a huge — and unusual — flagship branch in New York City suggests otherwise. Comments by the bank's CEO and Head of U.S. Retail offer clues to the bank's thinking.

Citibank once wore the mantle of the largest, most innovative consumer bank in America, if not the world. A series of troubles and mistakes going back at least to the financial crisis of 2008-9 have dogged the country’s fourth-largest bank so that it is now about half the size of in-town rival JPMorgan Chase.

With new leadership in place, led by CEO Jane Fraser, the megabank is making progress toward operating more consistently. What this means for its U.S. consumer franchise is not yet fully clear, but comments by Fraser, and an interview with the Head of Retail for Citi’s U.S. Consumer Bank, Craig Vallorano, provide key insights.

Citi’s Global Consumer Bank has for a long time been a weak spot, particularly in comparison to Citi’s Institutional Clients Group and its credit card business. In response to sagging performance of the global consumer bank, Citi in April 2021 announced it was exiting the consumer business in 13 mostly Asian countries. Fraser also said at the time that the bank would “double down” on wealth management, a separate division, but closely connected with the consumer bank.

“The new management is making the hard, but right, decisions,” said IP Banking Research in an investor note published on Seeking Alpha. “Whilst Citi’s global consumer bank is certainly challenged currently, the disposal of Asia and pivot to wealth management is the right fix.”

But what does this bode for Citi’s consumer bank in the U.S., which operates about 650 branches?

“Ultimately, Citi will need to transform its North American consumer franchise as well,” IP Banking Research observed. “It could well be through a digital-led strategy coupled with partnerships (say with large tech companies).” A development relating to the latter point that would have been fascinating to watch unfold was Citi’s partnership with Google on the Plex consumer banking account. However, that project came to an abrupt halt in September 2021 when Google pulled the plug on Plex.

Fraser stated during her third-quarter earnings call regarding Plex that the bank had “deliberately invested in very reusable capabilities for future partnerships and existing ones that we have, as well as our own proprietary efforts. … We’ve developed a whole suite of embedded services that are ready to deploy,” the CEO continued. “That’s things like real-time digital alerts, partner branded communications.”

More to Banking than Digital Transactions

Digital banking for Citi, as with most financial institutions, has been a particular bright spot in 2021. Fraser stated on the earnings call that “our digital strategy and investments are starting to pay dividends.” Digital deposits hit $19 billion, up 26% year over year, she said. More than two-thirds of those digital deposits come from customers outside of Citi’s branch footprint, with about half coming from Citi cardholders who did not previously have a retail relationship with the bank, Fraser stated.

Those results would seem to point to the beginning of the end of Citi’s branch-based consumer banking franchise, already much smaller than its larger rivals. But do they?

About a month after the earnings call the bank announced with much fanfare the opening of a new 7,000 square foot flagship branch at its corporate headquarters in downtown Manhattan. The facility itself has many interesting features, described below.

Citi’s flagship branch clearly is designed to play a key role in its new strategic commitment to wealth management.

“We have a strong brand among the affluent,” Fraser said. “The elevator from the affluent client base in our consumer franchise, all the way up to the ultra-high net worth in the Private Bank, is obviously a natural area to build out.”

In an interview with The Financial Brand, Vallorano provides details of the strategy behind the flagship branch and the changing role of in-person banking for Citi.

Read More: What Bank & Credit Union Branches Must Look Like in 2022 and Beyond

Vallorano says branch traffic has come back, but not completely.

“What we’ve seen in terms of foot traffic is about 80% back. That’s a sign that customers who used to come visit us for deposit-type transactions are increasingly digitizing that task.”

Not only is traffic down — possibly permanently — by 20%, but its composition is much different. “Customers are coming in for the more consultative transactional pieces like opening a mortgage or making investment decisions, at or above pre-Covid levels,” Vallorano states.

If anything, that transformation has increased the value of Citi’s branches. It shaped the design of its marquee headquarters branch to take advantage of the change. Not only the design reflects this, but also the role of the staff working there. For example, a key position in the branch is the concierge. Much like universal bankers, they are a blend of teller and banker, but also more accessible and mobile within the branch using tablets, as well as manning several “concierge bars” within the branch.

But Are Branches Worth the Cost?

Many industry observers have questioned how the high-cost branch channel can be justified or sustained. Vallorano’s response to that point is interesting:

“We operate [far fewer] branches than many of the folks we compete with. And what we can say is our branch network is highly effective. As measured by deposits on a per-branch basis, we are industry leading. So we continue to see the value.”

Now that customers’ expectations are moving more towards consultation, Vallorano sees that as “an opportunity to integrate digital and physical and drive even deeper relationships, increasing value. Those institutions who are more focused on the transactional side of the equation, may have different expectations around [branch] returns,” Vallorano states.

Key Features of the Flagship Branch

Although the new headquarters branch is unique in its size and scale, Vallorano says that much of what they designed into the branch will find application in the rest of their network. The use of concierge bankers, for example, has already been introduced elsewhere.

One of the most unique features of the new facility is that it is highly configurable. It has movable walls, and modular furniture that can allow staff to easily shift from a very open arrangement suitable for large gatherings — say a community meeting or special event — to very intimate spaces for private meetings and co-working space.

The photos below give a sense of this versatility. 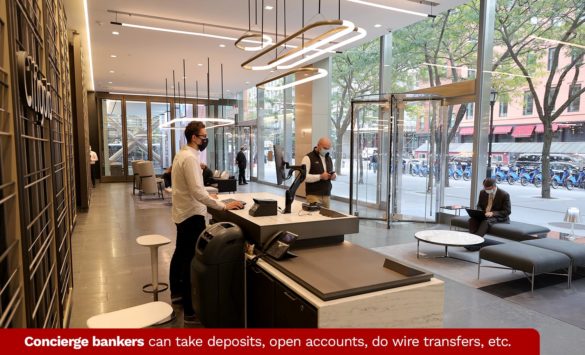 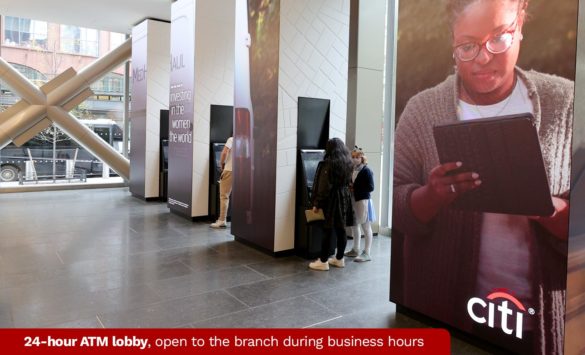 As Branch Manager Asmir Redzematovic explains, the flagship branch is a Citigold Center, the bank’s wealth management brand, which means there are certain enhanced facilities, including a private Citigold lounge. Clients can come in for meetings with their relationship or investment managers, come to work or just escape from their home for a couple of hours.

However, the new branch is for any customer and accommodates all traditional banking services, according to Redzematovic. Multiple conference rooms are all Zoom enabled for customer use.

14-foot-high sliding screens that separate the arrival lounge from the “service bar” area, co-creation workspace and meeting rooms can easily be shifted to open up the branch space. The 24-hour ATM lobby sits adjacent to the arrival area with tall glass doors that pivot and can be kept open or closed. The bank invited the Air Force Chief of Staff to visit the branch on Veterans Day and closed the glass doors to make a more intimate space for the conversation, according to Drew Benson, Head of Public Affairs for Citi Retail Banking. 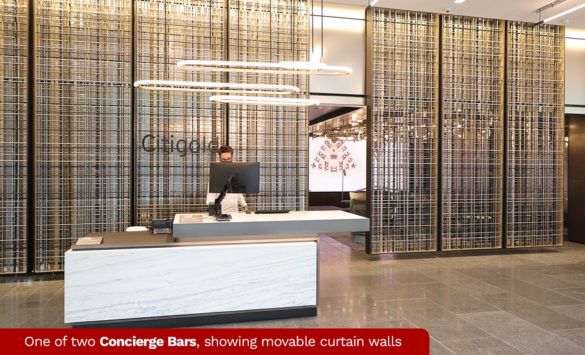 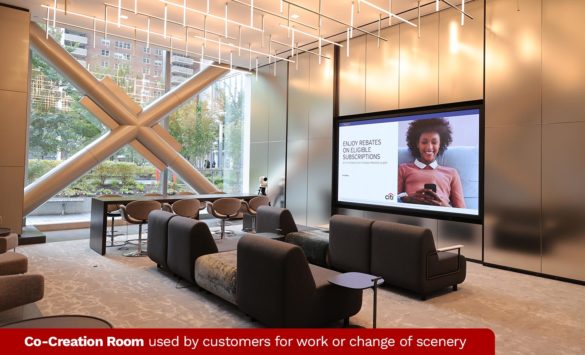 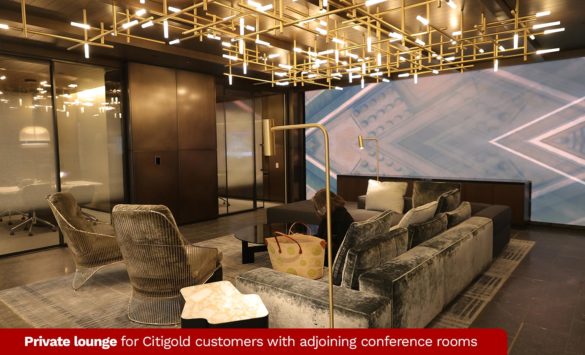 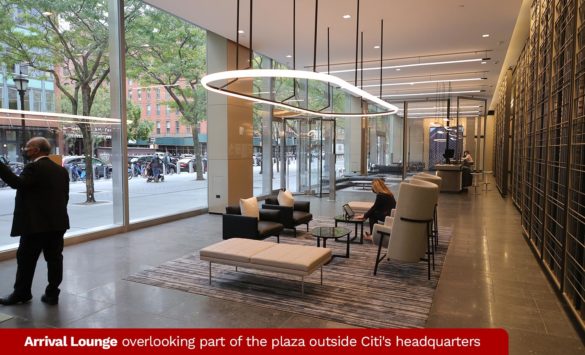 The focus groups the bank conducted in the community uncovered a strong desire for a place to collaborate, Redzematovic states. Believe it or not, even in Manhattan a free cup of coffee has appeal to many of the artists residing in the neighborhood for whom a $10 cup of coffee is too pricey, he observes.

On a typical day, between 16 and 20 employees staff the flagship branch, according to Redzematovic. These are a combination of personal bankers, concierges, wealth partners, business bankers and lending officers.

The top of the service bar, pictured below, has Bluetooth chargers built in so that customers can charge their phones while the bankers handle transactions for them or answer questions. 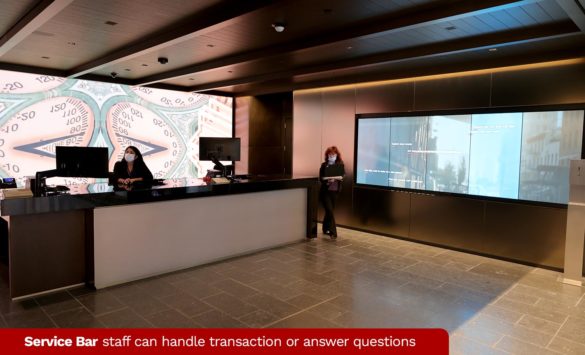 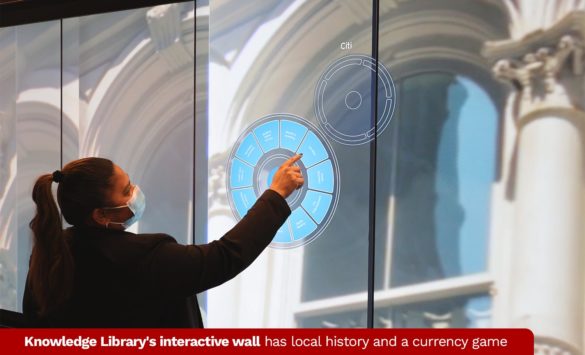 The interactive Knowledge Library touch wall is frequently uploaded with new content, Redzematovic says. This includes information about local points of interest, history of the Tribeca neighborhood in which the branch resides, product information and upcoming events.

Also part of the wall is a game that lets budding crypto entrepreneurs design an imaginary currency. “When you come in on a Saturday,” says Benson, “you’ll see parents doing their general banking and a slew of kids hanging out at the wall playing the money game.”