Subscribe Now Get The Financial Brand Newsletter for FREE - Sign Up Now
Most banks and credit unions have finite resources to invest in new channels. So where would investments best be focused -— text- and video-based live remote channels or AI-powered 'bot' service, including both basic and more sophisticated virtual assistant solutions? New consumer research sheds light on these options.

At some point if enough consumers want chips embedded in their body through which they can conduct or manage their finances, or if they want drones to deliver their crypto-loaded prepaid cards, it will probably happen.

And if it does, it’s a sure bet that there will still be branches, ATMs, voice and more, because in retail banking delivery channels never go away.

Even now channels have multiplied to the point where financial institutions have to figure out ways to prioritize which ones to use to best serve their customers, balancing old ways with new.

Adding to the dilemma, the squeeze put on in-person banking by the pandemic gave new impetus to a range of remote services including live chat, video chat, chatbots (automated response solutions powered by artificial intelligence) and virtual assistants, which use even more sophisticated natural language AI technology to communicate on much wider range of topics.

Banks and credit unions looking to manage this array — on top of branches, ATMs and call centers — would benefit from knowing to what extent consumers use and like these newer remote options. Some useful data has emerged from one of the periodic banking channel studies conducted by Phoenix Synergistics, as part of a new report, “Transforming Channels for the New Digital Reality.”

“How consumers bank in 10 to 15 years is speculation. But right now, and for the near-term future, single-channel financial providers — whether direct banks or branch-centric — will suffer in an environment where consumers are saying, ‘I want it all’.”

The veteran banking researcher says one thing that surprised him in the results was the high usage level of several of these digitally powered channels — particularly video chat, which is quite new compared with text-based chat. Use of both increased by ten percentage points from 2019.

“The use of these new channel technologies shows how consumers are taking the next step in how they interact with their financial providers — particularly, as you would expect, in the 18- 49 age range.

The other thing that surprised McCracken was the very high satisfaction levels reported by consumers. As shown in the charts below, overall satisfaction for two categories — live text chat and live video chat — was above 90%. Even more remarkable was that in both categories, the percentage saying “very satisfied” was at or very close to two-thirds.

“As a researcher,” he says, “it’s significant when you see more than half of respondents say something is ‘very good’ versus ‘okay’.”

By contrast, the use and satisfaction of chatbots, scored significantly lower than the two live-chat categories. However, a separate category called “virtual assistants” — such as Bank of America’s Erica and Capital One’s Eno — had much stronger results than the more basic chatbots. Both findings are covered in more detail in the related sections below.

( Read More: Why BofA – Not Fintechs – Should Keep Bankers Awake at Night )

Live chat was one of the earliest technologies to blend digital technology with the personal touch. Articles about online chat first appeared on The Financial Brand in 2011, but that was for a few pioneers. The Phoenix Synergistics data indicates that today more than a third of consumers overall (36%) use live, text-based chat on a their mobile phone or desktop computer, that’s up from 26% in 2019.

More than half of the 18-49 age group, the “sweet spot for most financial institutions,” is a user of text-based chat.

On average consumers overall use text chat almost three times per month (2.9), with the highest use (3.7 times a month) among the 18-34 age group. Nearly three quarters of this age segment are “very satisfied” with their use of text chat. 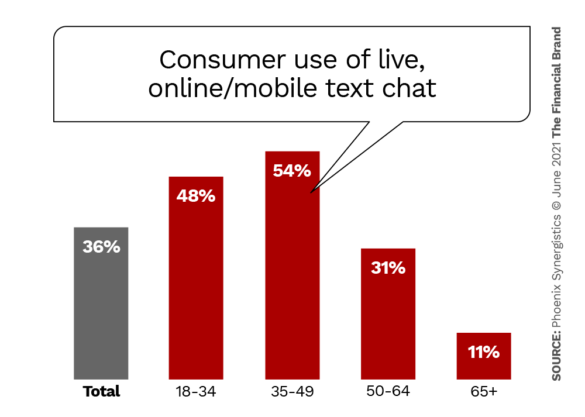 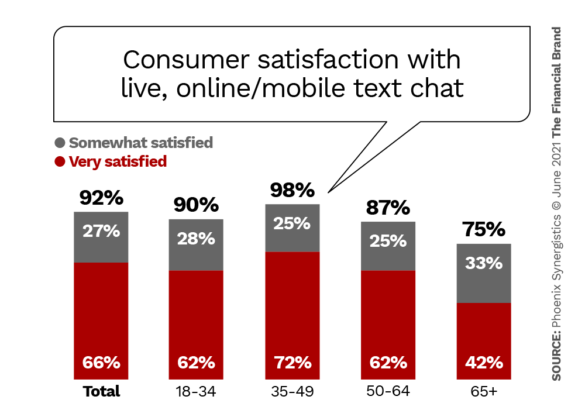 The top reason given for using text-based chat (40%) was speed, says McCracken. Coming in a close second (38%) was: “It’s easier than filling out an online request, hopping in the car or making a phone call.”

Strikingly, 58% of consumers using text-based chat on a mobile phone or computer say it is better than interacting with staff at a branch.

That touches on another conclusion of the research: that consumers may perceive these remote channels as a more low-pressure sales approach. “A person may feel more in control of the situation when interacting by chat through a computer or a phone as opposed to sitting in front of someone at a branch,” McCracken observes. With the latter, it’s “harder to disengage,” he adds.

McCracken uses a food analogy to describe what happened with digital channels generally during the pandemic, and video chat in particular. “When there’s nothing else in the house to eat, you’ll try some new food because you had to. If you end up liking it, you’ll most likely continue buying it.”

In its research, Phoenix Synergistics was probing was the use of video chat over mobile phones and computers, not use of video at drive-up stations or in-branch kiosks. The firm reports that use of live video chat jumped from 17% to 27% from 2019 to 2021, and 64% of these users were “very satisfied” with their most recent experience. 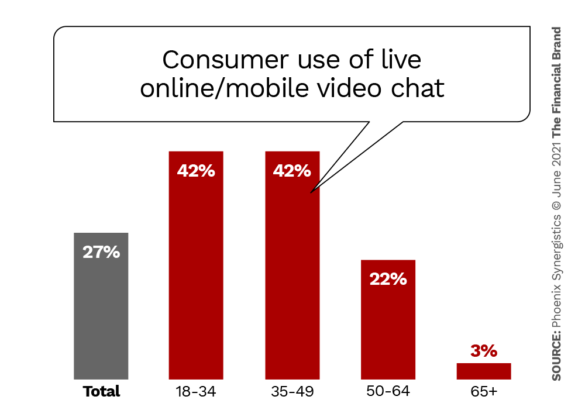 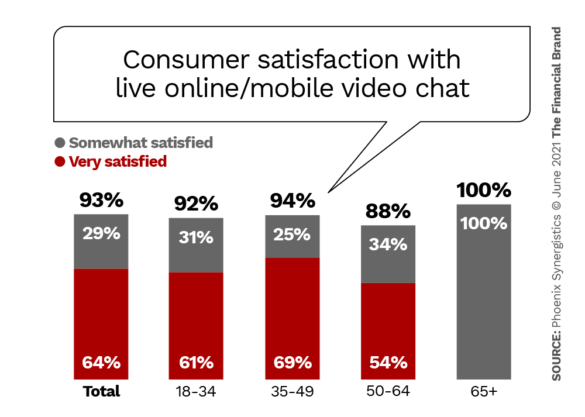 Three out of five consumers using video chat did so on a mobile phone. The much improved capabilities of both phone and networks have made this a much more satisfying experience. Just over half (52%) used video on a laptop or desktop computer, so there is some overlap.

The number one reason given for using video chat, McCracken says, is that it’s easier than using email or making a telephone call — exactly a third said that. The number two reason (31%) is that people “like to see who I’m speaking with.”

“That’s kind of the old-fashioned part of us,” says McCracken. “We still want to see our teller or bank rep.” The number three reason, at 30%, was “It’s a great way to get personal attention without going to the branch.”

69% of consumers using live video chat on a mobile phone or computer say it is better than interacting with staff at a branch.

McCracken notes that almost two-thirds of the people using video chat started using it during pandemic. “The idea of being able to interact with Sally or Joe without the fear of catching something must have been a huge driver,” he observes. Will the new interest continue now that branches are open and concern about Covid has lessened?

“Right now the majority are telling us that they will continue with their higher level of digital activity,” says McCracken. “But research a year from now will tell us what they actually did.”

Exactly a third of consumer respondents had used a chatbot from a financial institution. The survey questionnaire did not use the word “chatbot,” but rather described it as “services that answer your questions using artificial intelligence that provides automated responses … [via] online chats, emails or computer-generated phone calls.” It also separately asked about “virtual assistants,” as described in the next section.

With chatbots, there was a sharp difference in use by age group. 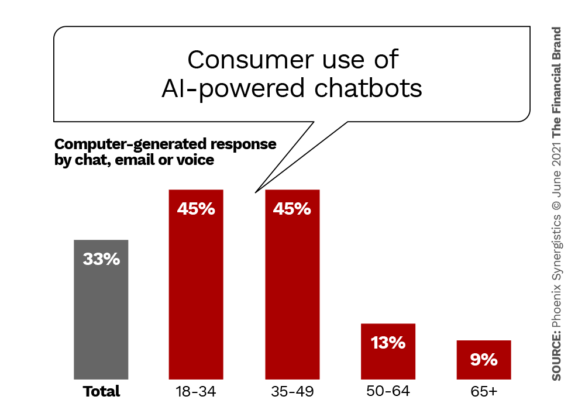 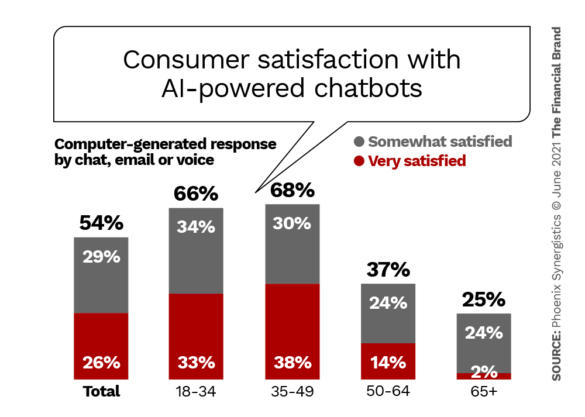 Frequency of use of chatbots was similar to text-based chat, 2.8 times a month versus 2.9. The most frequent interaction (3.4 times a month) comes from the 35-49 age group.

( Read More: How to Reboot Banking Channels As Pandemic Restraints Are Eased )

Overall satisfaction with chatbots was the lowest of the four remote-service channels described in this article. But still, just over half of all users were “satisfied,” which is not a bad number, according to McCracken.

Virtual Assistants: A Standout for Those That Have Them

One quarter of respondents say they have interacted with a virtual assistant from their financial institution. Not many banks or credit unions have this capability yet, although the technology is becoming more widely available and affordable. McCracken notes that the institutions that do have it, however, are among the largest. Bank of America’s Erica service alone is used by more than 17 million people.

According to the survey, the biggest users of virtual assistants are people between 18 and 49, at 37%. That compares with just 6% of consumers between 50 and 64 and 2% of those 65 or older. Typical frequency use for the main user group is 3.1 times per month.

Satisfaction with virtual assistants is 92% overall (“very” and “somewhat”). Of that number 62% are “very satisfied.” Those percentages are notably higher than those given for the more basic chatbot, showing the promise of the more advanced technology.

The greater trust people have in virtual assistants is shown in what they use them for, McCracken observes. He believes that the sales process becomes more viable with these advanced assistants.