The market potential for big techs, fintechs and other companies embedding digital financial products into their own services is vast. Already Goldman Sachs, BBVA and a handful of smaller pioneering institutions have launched banking-as-a-service initiatives, posing a threat to other banks and credit unions. However, the door is still open for fast-followers willing to embrace a radically different business model.

Imagine a world in which Amazon, Uber, DoorDash, Instacart, Facebook and Google — and ultimately any company operating digitally — provide banking services embedded within their own products and your institution is the one enabling that.

Few consumers would know that your bank or credit union is behind the slick app-based deposit, loan or payment product. Your own brand would be essentially hidden — but your balance sheet could expand exponentially. To achieve that, you would have to be willing to take a back seat to the national brand and be able to provide — on your own or through a third-party provider — seamless support via application programming interfaces (APIs) relating to insured deposits, compliance, payments, risk management and more.

That scenario describes the dynamic and rapidly evolving world of “banking-as-a-service” (BaaS). Its most typical application is in the fintech space where a dozen or so community financial institutions act as the partner bank behind the fast-growing challenger banks.

These “banks” are not banks at all, in most cases, and have to rely on a licensed institution to gain access to insured deposit accounts and the payment system rails. Thus Chime works with The Bancorp Bank, Affirm with Cross River, Dave with Evolve Bank & Trust and Square with Lincoln Savings Bank. Sometimes the relationships are direct, sometimes they involve third-party API providers such as Galileo, Synapse and Marqeta.

Challenger banks, however, are just part of what is really a much larger trend, as laid out in a new report on BaaS from 11:FS. As evidence, just look at Goldman Sachs, whose Marcus retail banking unit not only issues the Apple Card, but in mid 2020 partnered with Amazon to be the fully digital lender integrated into the ecommerce giant’s merchant lending platform.

“Not surprisingly, the always ahead-of-the-game Goldman Sachs is gearing up to be a bigger ‘banking-as-a-service’ platform,” Dushyant “D” Shahrawat of Rosenblatt Securities told Tearsheet. “Which means being the backstop for more non-financial companies as these firms begin offering financial services directly to customers.”

Or take at BBVA’s Open Platform, which allows any partner company to leverage the bank’s API-driven banking and payments solutions to offer their customers a BBVA banking product directly within their own channel.

“Companies across industry verticals — beyond simply digital banking and personal finance — have started infusing banking services into their products and ecosystems,” says Abhishek Gupta, BBVA Open Platform’s CEO, in a blog. “The reality is that innovation in financial technology is relevant to any business that deals with money in some part of its operations.”

BBVA regards every company as a fintech company, Gupta states. That vision reflects the essence of the concept expressed by Brett King in the title of his 2018 book: Bank 4.0 — Banking Everywhere, Never at a Bank.

What Banking-as-a-Service Is and Isn’t

In its report, 11:FS defines BaaS this way: “Banking as a Service is the provision of complete banking processes (such as loans, payments or deposit accounts) as a service using an existing licensed bank’s secure and regulated infrastructure with modern API-driven platforms. BaaS enables services to be delivered by an ecosystem of specialized providers rather than one, single vertically integrated entity.”

Fintech consultant and blogger, Chris Skinner, who coined “banking-as-a-service,” notes that the term is frequently misused. “It’s not Open Banking. It’s not APIs,” he states in his Finanser blog. “It includes both of these things.” BaaS may include APIs from Stripe, TrueLayer, or other fintechs, Skinner adds, but for it to truly be BaaS, it must be backed by a licensed bank.

Solarisbank, an API provider, amplifies on one of Skinner’s points:

Financial software company Moneythor notes that from a financial institution’s perspective, BaaS “involves embracing a more modular way of working and allowing an ecosystem of fintechs and software providers to connect to the bank through APIs.”

The 11:FS report describes three key players in the BaaS ecosystem, depicted in the graphic below. 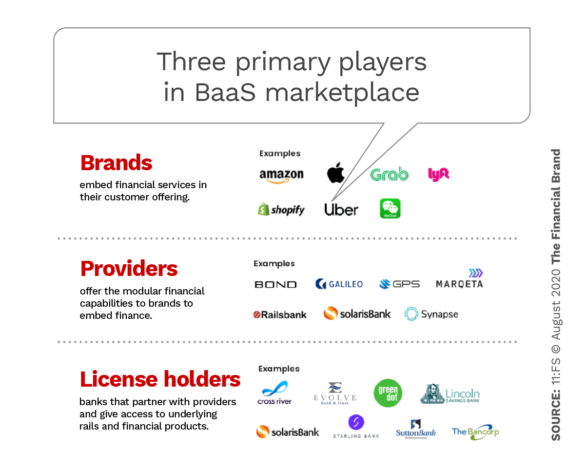 These three roles are not hard-and-fast. Some banks — for example, Evolve — also function as providers of certain capabilities. And some companies, such as Mercury, function as both a brand (“a digital bank for startups”) and as an API provider. The diagram below illustrates some of the many possible interrelationships. 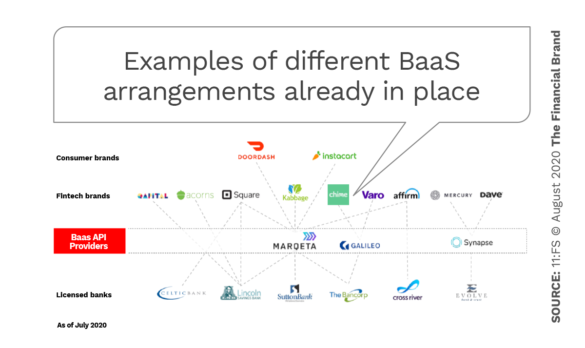 In some ways, the concept of banking-as-a-service is simply an extension of practices like co-branding commonly used in banking for many years. 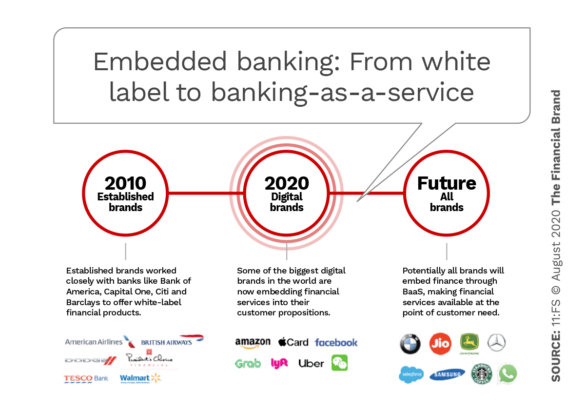 A key difference between old and new is time to launch. The traditional co-brand and affinity partnerships financial institutions entered into would often take six to 12 months to set up, relying on detailed requests for proposals (RFPs) and custom work, according to 11:FS. By contrast, BaaS providers have reduced the time to first transaction to as little as a few hours using agile procedures and technology.

Scope of the BaaS Opportunity for Financial Institutions

In its BaaS report, 11:FS cites a figure of $3.6 trillion as the potential size of the embedded finance marketplace. The projected revenue total, based on an analysis by Bain Capital Ventures, eclipses the 2020 value of the U.S. big tech companies and is roughly equal to the market capitalization of the top 30 banks worldwide. 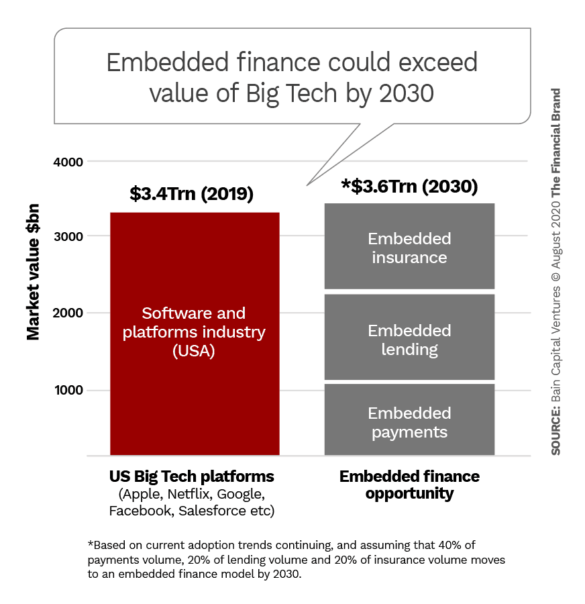 The estimate is from Bain’s Matthew Harris, who stipulates in a Forbes article that at the current growth rate the 8% market share held by fintech payments companies (e.g. Stripe, Square) will be 40% by 2030.

“The smart financial institutions will find a way to enable embedded finance, and think about their balance sheet as their super power.”
— Simon Taylor, 11:FS

Harris makes the case that not much of this new value creation will be coming to financial institutions, but Simon Taylor, Head of Ventures for 11:FS, says he doesn’t agree on that point. “The smart financial institutions will find a way to enable embedded finance, and think about their balance sheet as their super power,” Taylor tells The Financial Brand. “BBVA and Goldman are good examples of institutions who are starting to act this way.”

When the news broke in the fall 2019 about a Google banking account involving partnerships with Citibank and Stanford Federal Credit Union, Citi CEO Michael Corbat made a point of saying, “We’re very conscious around not being the dumb utility … of not giving away the client-customer ownership that’s there.”

Asked about that comment in regard to the growing trend of banking-as-a-service, Simon Taylor responds emphatically: “Honestly, I think the bigger risk is missing the opportunity of being smart pipes.”

He explains that the telco sector did in fact become “dumb pipes” in the mid 2000s when Apple and Google disintermediated both handset makers and telcos. “But I’d argue banking is different,” Taylor states. “A bank balance sheet is a fundamental asset that is misunderstood, and often under appreciated. Banks can lean into their strengths more here.”

Furthermore, Taylor continues, “banking-as-a-service is an opportunity to acquire deposits and distribute lending via fintechs and big techs at near zero marginal cost of acquisition. That radically alters the economics for any bank who can grab that opportunity.”

The consultant is not suggesting banks or credit unions give up their consumer brands, but says it’s clear that retail banking has changed dramatically. “By embracing the change, and being the smartest pipes, banks can find the right place for their brand and balance sheet in this new market,” Taylor believes.

The payoff from embracing banking-as-a-service comes in several forms depending on the business model. For non-bank brands the benefits of integrating banking services into their platforms include increased customer acquisition and retention due to a better customer experience as well as access to new revenue streams from deposit incentives and pass-throughs on interchange, says BBVA’s Gupta.

On the bank’s side, Gupta says, “Our partnerships strategy in the U.S., largely powered by our banking and payments APIs, is designed to bring exponentially more customers and deposits to the bank.”

Specific revenue streams for banks and credit unions can include “pay as you go” and subscription models, according to Taylor. Pay as you go typically involves a transaction fee for either an “API call” (basically when an institution’s API is accessed) or some other service measure, he says.

In addition to potential fees and deposit growth, 11:FS points out in its report that financial institutions can improve their own customer experience through use of the greater depth of consumer data that big tech brands have.

Where to Start to Get into Embedded Banking

The time for being a BaaS leader is already past, Taylor observes. But given the scope of this emerging market, there is still plenty of room to be a fast follower.

The consultant has this advice for banks and credit unions contemplating the BaaS opportunity:

“The first thing needed, really, is humility. Leadership teams that are willing to challenge some of the long-standing assumptions of the industry are best placed to succeed. Once the right level of strategy understanding is in place,” he continues, “then the goal is to identify what your strengths are as an organization, who the available partners are in the market and what opportunities you’re looking to exploit.”

One community institution that’s been through this exercise is Coastal Community Bank, based in Everett, Wash. The institution, with assets of $1.1. billion, is five years into its plan to become a BaaS provider. As reported in Independent Banker, the bank created a new division and has hired about 25 full time equivalent employees for the effort. (Coastal Community is among the second group of financial institutions to announce upcoming partnerships with Google and its selection was credited in part to the BaaS program.)

Like other institutions, the Coastal board was wrestling with options for the institution’s future including selling the bank, staying private, or going public. They decided to pursue a BaaS strategy and went public to raise the necessary capital.

“Our board put a flag in the ground and our vision is based on a seven- to 10-year strategy,” Eric Sprink, CEO told the Independent Community Bankers of America publication. “They were spot on,” he says. “Change is happening, only faster than we anticipated.”