Subscribe Now Get The Financial Brand's FREE Email Newsletter
20% of 18-24 year-old Millennials say they use a credit union as their primary financial institution, but that number is cut in half by the time Millennials reach ages 25-34.
Subscribe Now!

According to a study by FICO, one in five Millennials aged 18-24 say they use credit unions as their primary financial institution. But this drops to only 10% for older Millennials, those ages 25-34.

There are roughly 6,000 credit unions in the US today, collectively holding over $1.3 trillion in assets. In FICO’s survey, they earned high marks for overall trustworthiness, especially around the perception of providing greater transparency on fees.

“Millennials ages 18 to 24 years old are noticing the value that credit unions provide as an alternative to large banks,” said Joshua Schnoll senior director at FICO. “In particular, this age group is attracted to low and transparent fee structures and better interest rates.”

However, the survey also reveals these Millennials are two to three times more likely to close all their accounts with their primary financial institution in the next 12 months.

For the second year in a row, FICO’s study showed the number one reason that consumers leave their primary financial institution is the perception of high fees. Of those consumers who have switched institutions, 49% listed high fees as the top reason. For Millennials, fees are still the number one reason for switching, followed by poor customer service issues and ATM/branch convenience.

This presents a problem for credit unions that is somewhat perplexing. Credit unions are perceived to have lower fees than national banks, with 79% of credit union members strongly agreeing that fees are low — 10 points better than large national banks. If younger Millennials are choosing credit unions for their transparency and more favorable fee structures, then why are they not sticking around when they get older? What’s changed? Why are they leaving? 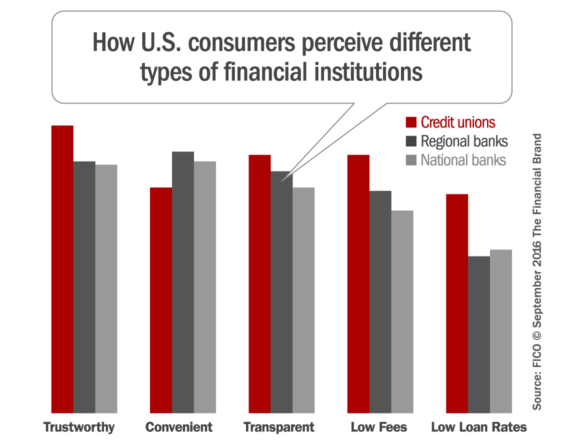 “Credit unions should market attractive rates and low fees to existing and potential members, given how highly it rates in their consideration process,” recommends Schnoll. “In addition, credit unions can more intelligently manage debit and credit accounts by leveraging transactional data and behavioral patterns to help prevent attrition. This will enable them to make the best pricing cross-sell offers or fee waivers for each member.”

FICO’s survey revealed that there might be an opportunity for credit unions to win over more 25-34 year olds. Looking at consumers of all ages, the survey revealed that 14% of respondents with accounts at major banks said they are likely to close all those accounts in the next 12 months, compared to just 4% of those doing their banking with a credit union. Capturing some of these big bank defectors when they are looking to make the switch presents a chance for credit unions to increase their share… or at least maintain it.

On the flip side, cross-selling appears to be a challenge for credit unions. 21% of national bank customers say they are “very likely” to open a new account or line of credit with a new bank vs. just 8% of credit union members.

FICO says credit unions should also consider the importance of consumer convenience when courting Millennials’ business. The survey showed that Millennials want to be able to manage their accounts from their smartphones and receive messages via mobile banking apps and SMS. Unfortunately for credit unions, there is a significant gap between this preference and the service level delivered. For example, only 42% of credit union members responding to the survey said that they are using their credit union’s mobile app, compared to 64% of customers at large national banks.

“While credit unions may not have the vast networks of ATMs and branches, new smartphone-driven technologies allow them to level the field,” Schnoll observes. “Integrating the ability to transact in digital channels can help address the attrition they are seeing in the 25-34 year-old age group.”