Subscribe Now Get The Financial Brand's FREE Email Newsletter
Digital-only neobanks have more innovative technology than most banks, plus deep funding. That should assure success, but just a handful of neobanks are dominant, with the rest spending a fortune in an attempt to build a sustainable customer base. For banks, this could be an opportunity to acquire struggling neobanks along with their technology prowess.

Digital-only neobanks have seen surging growth and adoption, with a big spike since the pandemic. However, they have used significant amounts of private equity to sustain the growth trajectories they are on.

Given that they still have a long way to go before they start to eat into a significant portion of traditional banks’ customer bases, it’s a fair question as to whether their current cost of acquisition is sustainable.

The neobank pool is getting crowded in any event. In 2017, there were about 100 digital-only neobanks globally, according to Moody’s. Today there are more than 250, though only a small percentage of those (such as Revolut, Rakuten and others) have their own banking license. Most rely on an existing bank’s license under a banking-as-a-service arrangement with partner banks like Cross River, The Bancorp Bank and Lincoln Savings Bank.

The number of digital-only neobanks has more than doubled since 2017.

“Appetite for digital banking has accelerated in recent years,” says Moody’s in an interactive report. “Virtual banks have surged ahead, increasing digital engagement with clients and simplifying the user experience, a phenomena boosted during the pandemic. Lockdowns amplified the need for easy online access to products, services and information. As we look ahead, financial services will become increasingly digital, likely benefitting digital natives.”

Indeed, digital-only banks have excelled at signing up new customers. They’ve succeeded in doing this by offering services that most (if not all) traditional banks were not offering at the time, such as early wage access, robust budgeting tools, eliminating overdraft fees or the ability to invest in crypto.

The seven leading neobanks in the United States had a combined total of roughly 39 million users at yearend 2020, according to Forbes, a 40% increase compared to the previous year driven by lockdown-era changes in digital habits. Another analysis, by venture capital firm GCV, notes that the global neobank market generated $20 billion in revenue in 2019, and is estimated to reach $471 billion by 2027, registering a CAGR of 48% from 2020 to 2027.

There’s no doubt that digital-only banks, with their mobile-first user experience and services missing from many incumbent institutions, appeal to younger adults. These consumers increasingly want the ability to open accounts, move money and manage their money in real time, 24 hours per day.

However, much of the challenger bank boom has been powered by the rocket fuel of equity funding. This funding is essential for getting off the ground and acquiring customers in a highly competitive marketplace, competing against both other fintechs as well as traditional banks for the consumer dollar, Moody’s explains. But when the number of customers acquired is measured against the amount of funding used, the results are not always impressive. (Monzo, for example, had $564 million in funding through the end of 2020, and had five million customers at that point.) 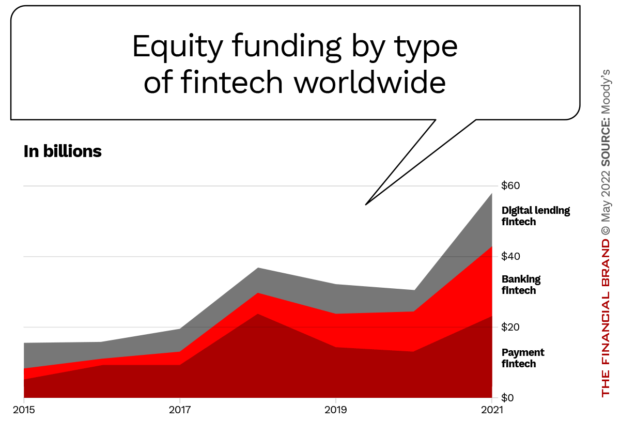 “Challengers that are part of conglomerates can rely on their parent companies to get the financial resources for investments and business growth,” says Moody’s. “Independent digital banking startups typically relied on venture capital money to finance their business expansion and cover the inevitable losses incurred during the first years of operation.”

Despite the impressive growth of neobanks in recent years, they represent a significantly small portion of the overall banking market. Combined they hold a mere 0.4% of the world’s total banking assets.

Furthermore, since these banks tend to attract younger consumers, the average amount in each account tends to be much lower than traditional banks. Moody’s notes that the weighted average customer deposit at the 20 largest neobanks holding a banking license at the end of 2020 was $367 — far less than traditional banks.

Many neobanks also have far fewer customers than the largest global banks. Rakuten Bank, for example, had 10.5 million customers at the end of 2020, per Moody’s. And that was even with the inherent advantage it had of being associated with a major global retail and e-commerce company. JPMorgan Chase, by comparison, had 68 million customers (yearend 2020), according to Moody’s data.

A notable exception is China’s WeBank, owned by TenCent, one of China’s giant e-commerce platforms. WeBank’s 270 million customers dwarfs even Chase. Buy now, pay later pioneer Klarna, which has a Swedish banking license, is also noteworthy. It too has more customers than Chase, and is aggressively expanding its range of payment and lending services beyond BNPL. 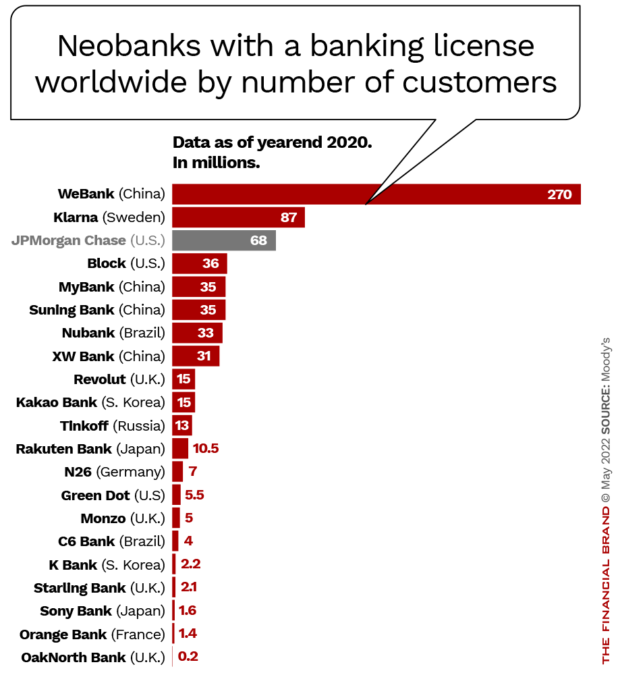 By asset size, however, even the largest bank-licensed neobanks are “minnows” — to use Moody’s word — compared to Chase. (Though the challengers are big compared to many traditional institutions below the top tier.) 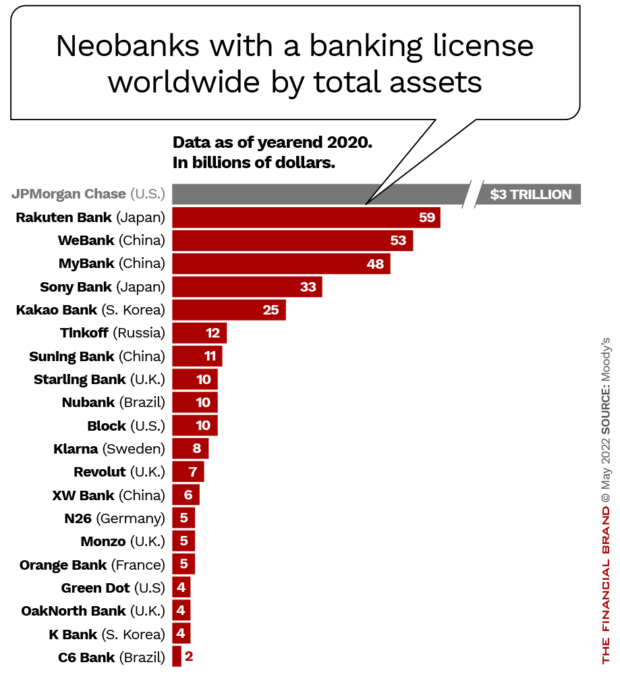 Significantly, many digital neobanks struggle to achieve profitability, despite the revenue growth noted earlier. Their losses are largely due to massive customer acquisition costs and high operating costs needed to scale, Moody’s states. Still, some do show profits. Per Moody’s data, WeBank led all neobanks, turning a profit of more than $700 million in 2020. Others that were profitable include Rakuten Bank, Block and Green Dot with 2020 profits of $257 million, $213 million and $23 million respectively.

Britain’s OakNorth Bank, catering to the small business market, earned $78 million in 2020 from a very modest customer base. It also had the highest deposits per customer of any of the 20 licensed neobanks Moody’s studied, at $18,019.

Where Neobanks Go from Here

Neobanks as a group have struggled to achieve primary account status. “Most customers use challengers as a secondary bank account, while their salaries are paid into accounts at incumbent banks,” Moody’s observes. Other research, however, indicates that in the U.S. that may be changing, at least for certain neobanks.

Cornerstone Advisors found in 2022 that the percentages of the three youngest adult generations — Gen Z, Millennials and Gen X — that consider a digital-only bank their primary checking account provider has jumped sharply. The three biggest beneficiaries, according to Cornerstone, are Chime, PayPal and CashApp (part of Block).

Traditional banks face competitive threats from the most successful neobanks, but also have opportunities to acquire those that are struggling.

For traditional banks, neobanks continue to pose a competitive threat. That should spur banks to invest in modern technology. More than that, legacy institutions will need to build their value proposition around the customer, with new business models that streamline back office operations, in addition to leveraging customer facing technology, according to Jim Marous, Co-Publisher of The Financial Brand and CEO of the Digital Banking Report.

“Differentiation will be achieved through data- and AI-driven personalization that is deployed from the initiation of the relationship throughout the entire customer journey,” Marous writes. “Customers will no longer accept generalized banking solutions that are difficult to open or use.”

On the other hand, traditional banks also have the opportunity to acquire neobanks that may have innovative technology, but struggle to attract customers and grow deposits.

The strategy goes beyond simply partnering, and would provide banks a faster way to develop new products and services on an ongoing basis. For the digital-only banks, being acquired gives them access to a broader customer base.

Such tie-ups have been tried before with mixed results (BB&T with Simple), but the market is not the same as it was even just a few years ago.