Subscribe Now Get The Financial Brand's FREE Email Newsletter
Everyone knows that the pandemic propelled digital banking to a new level. Less is known about the approaches financial marketers are taking to promote their institution's mobile apps. Those efforts are vital given how competitive the market has become. Here's what a wide range of institutions are doing to attract consumers' attention, with suggestions for the most effective approaches.

2020 turned a spotlight on the need to meet consumers’ banking needs digitally. Various sources have highlighted the dramatic impact of this trend. One study, conducted by PYMNTS.com and Entersekt, reported an eye-popping 200% jump in mobile banking use since the start of the pandemic.

Even more important than the usage spike, however, is that more than two in five consumers (45%) identify mobile banking as a top-three factor in why they choose a financial institution, according to Insider Intelligence. That’s up from 38% in 2019, making mobile banking the second most important factor behind fees — and ahead of branches — in the choice of an institution. 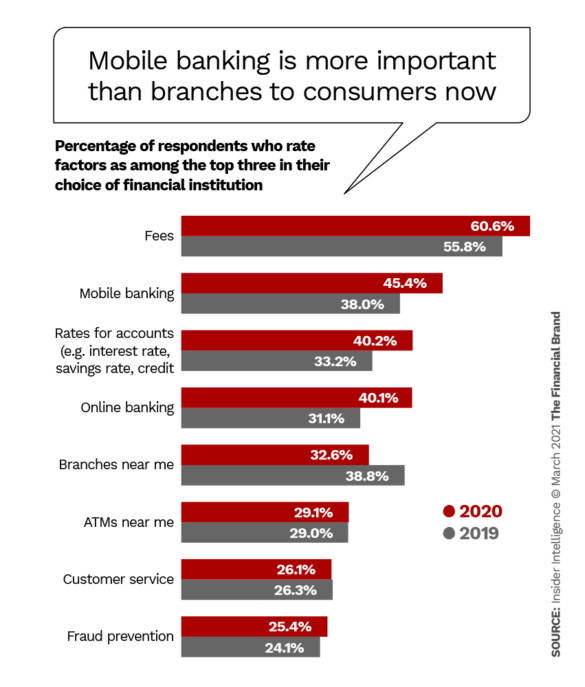 The challenge for many banks and credit unions is that this elevated interest in digital banking came right at the time when a handful of megabanks and neobanks were poised to grab a bigger share of consumers willing to try something new.

Neobanks Chime and Stash had record numbers of account openings in 2020, according to a Comperemedia’s 2020 Banking Annual Review. Among the megabanks, Bank of America stood out. Its Erica digital assistant added 6.4 million users in 2020, as a senior BofA executive told American Banker. That brought the total of Erica users by yearend 2020 to more than 16 million.

How Marketers Promote Mobile Apps in a Crowded Field

Many financial institutions, not just the largest or the “neos,” rode the digital wave to varying degrees. Now all of them must figure out how to stand out in a crowded and highly competitive field, particularly for mobile banking.

Comperemedia highlights the digital marketing efforts of leading financial institutions as part of its annual banking review, written by Esteban Duverge, Associate Research Analyst. Below are some examples of mobile banking app promotions in email and Facebook from Comperemedia Omni that Duverge shared with The Financial Brand. The analyst also provided commentary relating to the examples, amplifying on his report notes.

“The line between banking products and their respective mobile apps needs to be erased in order to create a sense of integration for the customers, where banking and digital go hand in hand.”

Convenience and control were at the forefront of every mobile app value proposition, Duverge writes. Bank of America, for example, motivated customers to “get your banking done easily and securely” with its app, while Chime highlighted that its mobile app will provide customers with “complete control of your money from the convenience of your smartphone.” 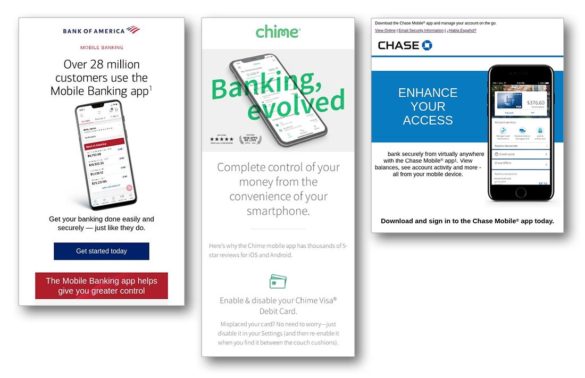 Based on Comperemedia’s marketing database, Citibank was the most active financial institution in promoting mobile banking by email in 2020, with a projected email volume of 32.8 million. Chase (26.6 million) and Capital One (17.0 million) followed in second and third position by volume.

Beyond the biggest banks, marketers at credit unions and regional banks were definitely in the game, promoting their mobile banking apps. Citizens Bank positioned its app as the best way to bank in “today’s challenging times.” Fifth Third Bank reminded customers of the capabilities and convenience of its app, while Patelco Credit Union communicated its latest mobile banking improvements. The email promotions of all three of these institutions had something in common, Duverge states: “Always highlighting convenience above everything else.” 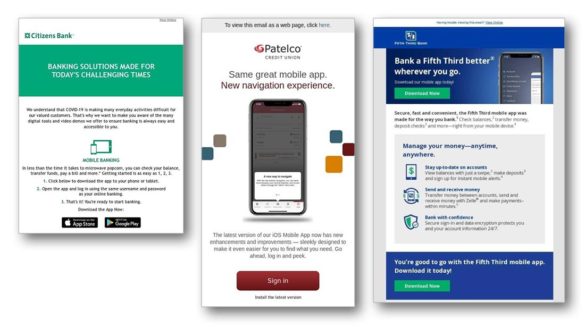 Benefits of a Single-Feature Emphasis

Citing Bank of America again, Duverge believes the bank’s approach of highlighting specific features of its mobile app in separate emails (e.g. mobile check deposits, Erica, Zelle) was effective. Most financial institutions tend to list all the capabilities of their mobile app in one email, he states. “Showcasing one feature at a time allows customers to focus on one capability, and facilitates the digestion of information.” Each of the examples below takes that approach. 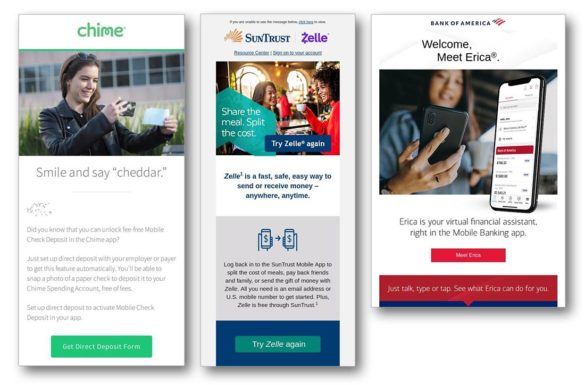 Marketing emails should always highlight the most important information before customers have to scroll, many experts agree, yet the messaging also needs to motivate the reader to keep reading. Ultimately, it’s a balancing act.

The use of step-by-step guidelines and checklists helps when it comes to summarizing information, Duverge suggests. But he warns marketers to steer clear of heavy text in emails.

How Social Media Is Used to Promote Mobile Apps

In their social media ads, both traditional and mobile-only institutions tend to differentiate their brands by marketing no-strings-attached value propositions and a convenient experience, according to Duverge. In addition, many traditional institutions, with an eye on fintech competition, focus on the mobile tools they offer to help consumers track and manage their spending and saving, as the three Facebook ads below show. 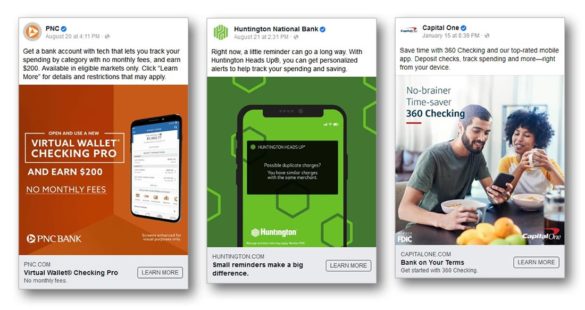 Neobanks such as Chime, Varo and N26 centered their value proposition as “fee-free,” Duverge notes.

Regarding the use of search engine optimization, Comperemedia conducted an SEO analysis over three months in mid-2020 and found two divergent approaches by leading neobanks. Chime’s top search terms targeted brick-and-mortar banks, using the almost identical keywords “bank near me” and “banks near me.” Together these two generated more traffic than even the keyword “Chime.”

Varo, on the other hand, relied on product-specific keywords, including “checking accounts” and “prepaid cards.” Its traffic overall was considerably less during the same period. It’s best result came from the keywords “mobile banking.”

Some Takeaways from Neobanks’ Marketing

“Traditional banks often advertise their mobile banking apps as tools to interact with their checking or savings accounts,” says Duverge. “But since the identity of neobanks and mobile banks can’t be separated from their apps, they promote mobile banking as a lifestyle in and of itself.”

“To differentiate their mobile apps from competitors’,” he maintains, “marketers will have to translate the value proposition of their apps into messaging that will support the lifestyle of their customers.”