Subscribe Now Get The Financial Brand Newsletter for FREE - Sign Up Now
Financial institutions are realizing that they must capitalize on vast data and relationship advantages, providing enhanced advisory and digital delivery benefits. Open banking and partnering with third parties are seen as ways to improve customer acquisition and retention.

For the ninth consecutive year, Temenos has partnered with Capgemini to conduct a comprehensive banking survey entitled, “Open for Business”, covering areas such as banks’ corporate and IT priorities, their challenges, and their view of the competitive environment. Consistent with last year, regulatory challenges are diminishing relative to the other challenges banks face, with customer retention becoming a greater focus due to increased competition.

Unlike last year, banks are now more concerned with threats from large legacy banking organizations more than non-bank entrants, mainly because of their significant resource capacity. Most banks still view the new generation of neo-banks and fintech firms as a potential threat as well.

To remain competitive, the survey found that banks are investing heavily in IT systems. They are investing in digital channels as well as in the modernization of the underlying operating systems that require significant upgrades. “Banks increasingly realize they will need full end-to-end systems, as well as data-analytical capabilities, if they are to provide rich and instant fulfillment, serving up insights that help customers make smarter financial decisions,” stated the report.

In response to the need to retain customers and provide enhanced value, the banking industry’s perception, understanding and willingness to test open banking increased from the previous study. In fact, the industry today accepts open banking as more of an opportunity than a threat, with banks ready to invest in APIs.

This year, 69% of respondents see open banking as much more of an opportunity than a threat compared to only 50% last year. As a result, open banking is now viewed as a priority by 51% of respondents up from just 30% a year ago. Finally, 48% of bankers indicated they are ready to invest in an API platform (up from 35% a year ago).

In addition to being impacted by regulatory changes (like PSD2), banks are responding to market pressures and the realization that partnering with a fintech firm is essential to remain relevant. This was reinforced by the recent study from CapGemini, LinkedIn and Efma, where 77% of financial services executives believe fintech firms provide a good opportunity for partnerships.

After a year when IT modernization was the top priority mentioned by participants in the Temenos survey, investment in digital channels retook the #1 position, with 25% of those surveyed indicating that digital channels was where money is flowing. As was the case last year, innovation was the second most mentioned priority at 22% of those surveyed. IT modernization (19%) rounded out the top three priorities, down slightly compared to last year. 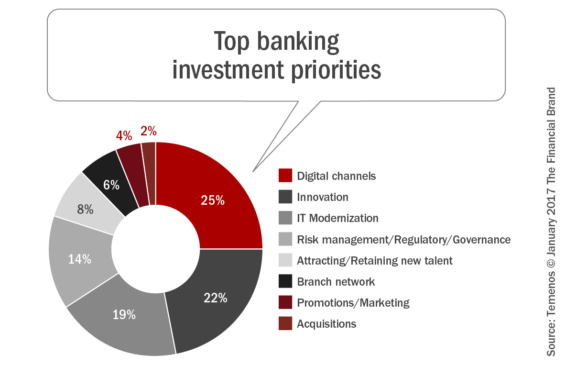 Investments in digital channels in conjunction with IT renovation is imperative since one without the other leads to both ineffectiveness and inefficiencies. According to Temenos, “There is little point in having state-of-the-art digital channels if the data and content being served up is neither relevant nor timely and if the underlying fulfillment mechanisms are not instant and frictionless: user experience cannot be meaningfully enhanced under these conditions.”

Mergers and acquisitions continued to be the least mentioned priority, with just 2% of the respondents saying that M&A activity was a top priority. This low prioritization underscores the focus on internal issues before expanding product sets of footprints in the coming year.

The banking industry’s IT budgets are forcasted to be up strongly again in 2017. In fact, the gap between the number of financial institutions predicting their IT budgets will increase in the coming year compared to those expecting budgets to fall is at its highest level since the first survey in 2008.

As was the case last year, the top areas of spending for the upcoming year are for core banking systems, digital channels and analytics. As mentioned earlier, this makes sense since, in order to maximize the impact of investments in areas such digital channels, analytics and CRM, that a real-time, customer-centric core banking system is essential.

Potentially of a concern is the level investment growth for business intelligence, big data and analytics, given the need to improve personalization and real-time cognative learning to replicate the experience received from non-financial firms like Google, Amazon, Facebook and Apple. 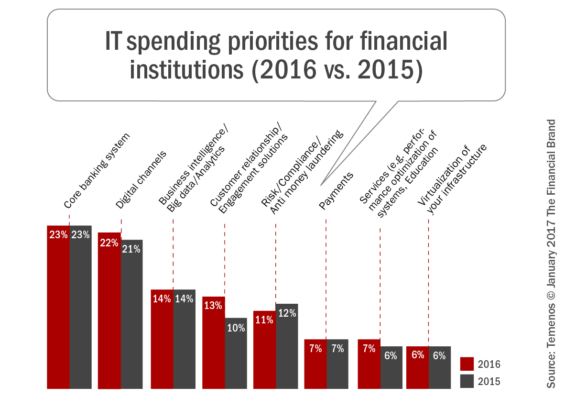 While a bit lower than in prior years, ‘retaining customer loyalty’ remained the top corporate challenge  for bankers in this year’s survey. According to Temenos, “The drop in importance relative to recent years likely reflects a more proactive view from bankers as they realize that, for example, leveraging data to improve customer experience is actually one of the best ways to retain customer loyalty.” 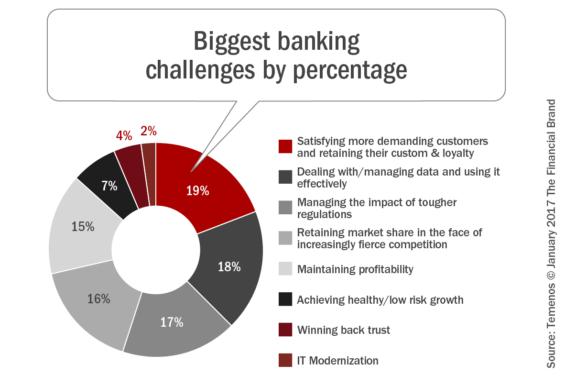 Aligned with the 2017 Retail Banking Trends and Predictions Report, the need to effectively gather, analyze and apply consumer insights continues to be both a challenge and opportunity. It is not as much of a problem having enough data as it is knowing what data is important and moving the use of data from reports to the consumer. It is also a challenge because it requires banks to bring together disparate data sets and to draw real-time, useful insights from them.

One of the more dynamic areas followed by Temenos has been the impact of technology vendors, neo-bank and fintech competition. While the external threat from non-banks was front and center in the past, the threat from existing incumbents, new banks and fintechs increased in importance this year.

Dramatic drops were seen in the perceived threat from ‘big tech’ vendors (Google, Amazon, Apple, etc.) possibly because of the slow take-up in digital payments. General retailers also saw a drop in their level of perceived threat. 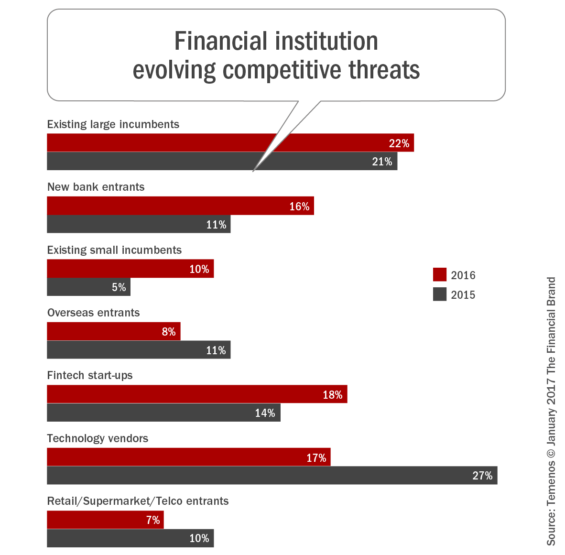 Large incumbent banks continue to be the strongest threat due to easy access to capital, an existing customer base and the ability to partner with fintech firms through acquisition of open banking APIs. Further, according to Temenos, “It also interesting to note that the industry seems less concerned by the threat of overseas banks entering their markets which indicates a (regulatory-induced) balkanization of banking services.”

It is clear as we review last year’s and this year’s reports, that the importance of becoming a ‘digital bank’ has never been more important. From investing in core architecture upgrades, to providing a better digital experience to customers, the need to move quickly is evident.

Partnering and/or learning from fintech firms, challenger banks and even technology platforms is the way to become well placed for the future. Underlying all of these investment trends is the increasing need to leverage data to improve the customer experience through personalization, advanced advisory capabilities and contextual offers.

Ben Robinson, Chief Strategy & Marketing Officer at Temenos, said, “As last year, there was significant year on year change in our survey results reflecting the rapid pace of change in the industry. We are not surprised that banks are placing much more focus on data since analytics are key to delivering the right level of customer experience and regulations like PSD2 will up the ante in the fight for banks to hold onto customers. What is more surprising is that respondents see less of a threat from external players, suggesting they see a path through open banking to take advantage of the innovation coming from the fintech sector to ward off the threat from internet platforms.”

One way many banks are testing to achieve these goals is through open API banking. Prompted by both regulation changes and consumer demands, many banks believe open banking is a necessity for customer retention.

“One of the clearest indications of how the banking industry is changing is in its shift to embrace open banking and to partner with the FinTech community,” said Anirban Bose, Head of Global Banking and Capital Markets, Capgemini. “With the potential to turn disruptions to business opportunities, open banking has evolved from a CIO/CTO discussion and is now a CEO and Board of Directors level topic. The use of Application Programming Interfaces (APIs) to drive FinTech collaboration, in particular, provides ways to open up new channels, increase revenues and encourage innovation, all of which in turn, strengthen customer loyalty.”