Subscribe Now Get The Financial Brand's FREE Email Newsletter
Making its marketing and communications team an equal player with other executive-level units has helped the big regional not only become a digital banking leader, but effectively communicate that edge. A sophisticated new brand ad campaign testifies to the advantages of having Marketing integrated at the highest level.

Having a “seat at the table” with the executive management team has been a holy grail for bank marketers since marketing became a discipline in financial institutions.

Marketing has raised its profile in banking over the years, but relatively few chief marketing officers report to the CEO. One standout example of where that happens is Huntington National Bank, where Julie Tutkovics, EVP and Chief Marketing and Communications Officer, serves as a member of the bank’s executive leadership team and reports directly to Stephen Steinour, Chairman, President and CEO.

At $176 billion in assets, Huntington is the 20th-largest bank in the U.S., just behind Midwestern rival KeyBank. Very few, if any, financial institutions of that size have elevated Marketing to the same degree. A couple of megabanks, in fact, have retired the CMO title.

“I would say smaller banks do a better job of recognizing the importance of Marketing,” says Tutkovics in an interview with The Financial Brand. “As organizations get larger, they often end up with layers of management,” she observes. And the further Marketing and Communications get from the decision making, the harder it is to keep the brand authentic and functional with consumers. 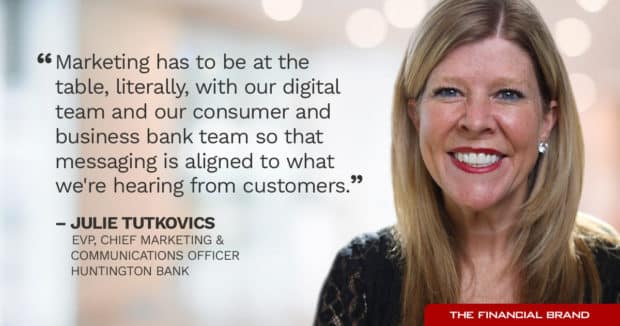 For many bank and credit union marketers, Tutkovics’ situation may represent the pinnacle of what they hope to attain professionally. Officially her responsibilities include marketing and all communications — internal and external (public relations, customer communications, media relations). She also oversees customer advocacy, market research and branding, including the newly launched “True Story” brand campaign. The campaign is detailed below along with examples of the ads.

The Case for Joining Marketing and Communications

Having the CMO report directly to the chairman and CEO is very intentional because it allows marketing, communications and customer advocacy to be represented at the highest executive level. “It puts us at the table when management is contemplating what’s happening in the marketplace — whether that’s the impact of inflation, a pandemic or a possible recession,” says Tutkovics.

Equally important is having the marketing and communications functions under one executive. That’s not often the case, Tutkovics notes.

She says Steinour brought them together when Tutkovics joined the bank six years ago. His reason, she says, was that “brand is as much about what we say externally as it is who we are as an organization.”

Marketing, to Tutkovics, is the bank’s external voice, and communications its internal voice. “My job,” she says, “is as much about internal culture as it is about external brand.”

In fact she feels the focus on the bank’s people and culture may be the more important of the two responsibilities. “Our colleagues are the brand,” she states, adding they are the ones delivering on the brand promise every day.

“We also find that our best ideas often come from our colleagues,” adds Tutkovics. As one example, management heard from front-line bankers that customers just needed a little extra time to make a deposit or to be able to move money around to avoid a penalty fee, which led to some of Huntington’s overdraft innovations. The bank was an early mover on that issue.

The Power of Interconnected Teams

Having Marketing and Communication deeply woven into Huntington’s strategic framework is a key differentiator for the regional bank. Tutkovics’ group works on an equal footing with Consumer and Business Banking, Digital Banking, and Product Development.

This arrangement is comfortable for Tutkovics. She has been in financial marketing for 30 years. “In past lives I actually had the product and digital folks reporting to me,” she states. The exec has worked for four different banks, most of them smaller than Huntington, as well as a stint at Fidelity. In fact she and Steinour worked together previously at Citizens Bank.

Huntington Bank’s interdepartmental alignment, as Tutkovics calls it, has already borne fruit for Huntington. The bank has long had a customer focus and a “Welcome. We Look Out for You” brand message. It’s more than just words; Huntington was well ahead of most of the industry with a 24-hour overdraft grace period to help consumers avoid fees — the bank introduced that feature ten years ago.

More recently, it has developed a series of tools using artificial intelligence and pattern recognition, collectively referred to as “The Hub.” This online and mobile dashboard is free for every checking account customer and helps people better manage their financial lives through real-time alerts, spending analysis and tools for consumers to set savings and other financial goals.

“The marketing world has changed a lot in my time in this business. But there are some things that remain true. One is being a good listener.”

For the build-out of The Hub, Tutkovics says that the bank embarked on a Midwest road tour in which bank employees visited with consumers in their homes. “Our marketers and digital developers were sitting around kitchen tables, unearthing not just the spoken needs of our customers, but some unspoken needs as well,” says Tutkovics. Armed with that insight, the marketing innovation team, partnering with the bank’s digital team, built the solution.

The kind of digital innovations the bank has rolled out, particularly since the start of the pandemic, have genuinely surprised some customers and non-customers, the bank found, almost to the point of disbelief — “No way!” “Where’s the fine print?” are two examples. Marketing used that surprise (and some of the actual comments) for a new branding campaign called “True Story.”

Aiming for a Little Happiness and Joy

The art and creativity of marketing is what drew Tutkovics to the field 30 years ago. She hasn’t lost that interest even as technology and data have transformed the function. She believes the science of marketing helps improves the creative side.

Following up on its 2021 brand campaign called, “This is how we reinvent banking,” Huntington launched its new “True Story” campaign in late spring 2022. It gives full rein to creativity using dance and music and leans into the disbelief it was hearing from people. In essence the message was, “Yes, Huntington is doing unbelievable things — true story,” according to Adam Ferguson, Chief Brand Officer.

Describing the thinking behind the ads, Tutkovics says: “People are really drawn to the music and the dance and the motion as well as the happiness and joy. There’s often stress associated with money and people are extraordinarily emotional about their money.”

She says Huntington wanted to tap that emotion and at the same time connect it with a bank that is helping them with your money — that’s truly looking out for you. She also observes: “In the marketing business you have to have an entertainment factor.”

The combination of color saturation, motion, dance and music in Huntington’s ads is very distinctive from competitors and from business ads in general, the CMO feels. At the same time, the campaign doubles down on inclusiveness and the bank’s “Welcome” brand, says Tutkovics, in the way it uses different types of people and different types of dance.

The True Story campaign was also designed to help Huntington break through the marketing clutter in the new markets it entered — including Denver and the Twin Cities — through its 2021 acquisition of TCF Financial.

Finally, given the direction media buying has taken, Tutkovics wanted ads that would easily adapt to different platforms. “It’s great to create a beautiful 30 second spot, but what does that campaign look like in six seconds? Or 12 seconds?”

“So much of what we do now is in the digital space through streaming services or interruptive ads on YouTube or connected TV, as well as TikTok and the rest of the social channels,” explains Tutkovics. “You have to have compelling creative in order to be able to slice and dice it in new and different ways.”