Subscribe Now Get The Financial Brand's FREE Email Newsletter
Financial institutions, whether they know it or not, have entered a new paradigm in marketing, where everything they have been relying on has changed. Raja Rajamannar, Chief Marketing Officer at Mastercard lays out the new ground rules in which marketing is no longer fueled simply by creativity and loyalty but by experiences and, above all, by technology.

As anyone in marketing knows, Mastercard has to its credit one of the longest-running, most successful campaigns ever created — in any industry. “Priceless,” created in 1997, and still going strong, was the company’s answer to the emergence of what current CMO Raja Rajamannar says was marketing’s second paradigm — emotional marketing, but it has evolved to stay relevant with each succeeding stage.

In a recent Banking Transformed podcast interview, with Jim Marous, Co-Publisher of The Financial Brand, and CEO of the Digital Banking Report, Rajamannar said that in the intervening years technology has changed marketing on a level never seen before.

The last three paradigm changes in marketing have been driven by technology, as marketers discovered the power of data, using it for social media marketing, location-based marketing, and mobile marketing, all of which remain effective today. But that is changing.

The fifth marketing paradigm is defined by technology — not just one, like the internet, but dozens, all impacting classic marketing theories.

The latest (fifth) paradigm, which is happening now, is what Rajamannar calls “quantum marketing.” He defines this stage as an extreme and abrupt change in marketing that defies classical theories and brings them across traditional boundaries. It’s the subject of his 2021 book, “Quantum Marketing.”

Whereas one or two technologies influenced other paradigms — the internet, the iPhone, social media — the latest paradigm is being driven by dozens of technologies that have come about in the past decade. Everything from artificial intelligence to 3D printing to drones to autonomous vehicles has made traditional marketing irrelevant and ineffective, he says in the interview.

“The marketing as it worked in the past is not going to work tomorrow or even today. Marketing today is failing big time. With this disruption coming, every single theory and concept of marketing will be stood on its head. It will totally topple. You need to reinvent marketing. You need to reimagine marketing,” the CMO states.

Consumers Aren’t Loyal, They’re There for the Experience

Rajamannar, who worked at Citibank for 15 years, maintains that in this latest era of marketing, loyalty doesn’t hold the value it used to. While banks and credit unions often focus on customer loyalty, he believes customers are more often there for rewards and experiences and that they’ll quickly find the next best thing if it doesn’t meet their needs.

Rajamannar points to one study where 70% of spouses had cheated on one another, even facing the serious consequences that could come with being caught.

“If they are not loyal in their personal lives, why would they be loyal to brands who rank so much lower amongst the scheme of things in people’s lives?” says the Mastercard exec.

Because most human decision making really happens subconsciously, he says, loyalty programs are less about loyalty than they are about stickiness and influencing preference. This is precisely why every aspect of marketing needs to change, says Rajamannar. 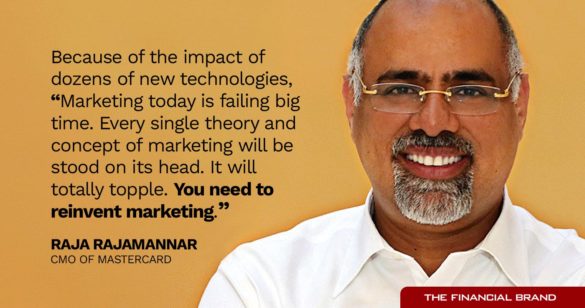 Innovative banking providers, many of them neobanks, are already forging ahead in the fifth paradigm of marketing by focusing less on loyalty and more on customer needs by filling the gaps that traditional banks aren’t. Rajamannar points to Robinhood, NuBank in Brazil, and N26 and Zen in Europe as examples of disruptors in the new era of marketing.

New banking entrants approach marketing without constraints of a traditional mindset. They’re all about empowering consumers.

Because consumers are ultimately there for the experience, not because they are obligated, marketing must evolve to put customer needs at the center of everything. Mastercard’s Priceless campaign gets to the root of what the company really does. That’s the realization that Mastercard is not a direct-to-consumer company but provides a platform customers use in their own way.

Mastercard now curates experiences in ten focus areas: music, sports, philanthropy, culinary activities, travel, shopping, environmental sustainability, movies, arts and culture, and health and wellbeing. “In each one of them, we strive to make it mind-blowing,” says Rajamannar, “really leave you with a strong memory that will impress you about our brand in a positive way.”

Only the largest consumer banking providers can attempt experiential marketing at that scale, of course, but the principles of customer-first, customer needs, customer experience are universal.

Much as Mastercard took a big risk when it unveiled those experiential campaigns, financial marketers will also have to take new risks and experiment in the new marketing paradigm. They’ll also face many challenges along the way, says Rajamannar.

In the podcast, Rajamannar also noted that while 5G and greater bandwidth will increase opportunities and enable powerful insights, it will increase expectations, pressuring marketers to make sense of data in real time. The growing speed and volume of data will also make privacy and security even more important, Rajamannar observes. “Meanwhile, the hackers will become even more sophisticated at breaking into various systems, so the consumer data that you are sitting on is going to be more at risk,” he states.

Marketers who can balance opportunities with the privacy risks and earn the trust of their customers stand a lot to gain. Rajamannar points to Amazon as an example of a company that perfectly balances data collection and recommendations with security and customer trust.

“That’s the key thing,” the CMO states. “The trust enabled by the transparency of what they’re going to do with your data, an assurance that your data is protected, and a reassurance that they will not abuse and misuse your data.”