Subscribe Now Get The Financial Brand Newsletter for FREE - Sign Up Now
2016 will mark the year where seemingly small changes in banking will result in major transformation for the industry.

By Tery Spataro, EVP and Director of Innovation at CCG Catalyst

What’s on the table for banks in 2016? A good bit on the to-do list are initiatives started last year, as the banking industry “doubles down” on implementing new technologies across all channels to better attract customers … particularly Millennials.

But as new advances in financial services crop up faster than ever before, bank and credit union executives are also keeping their eyes open for what could quickly become the next paradigm-shifting idea – like blockchain technology or even artificial intelligence – that could transform the financial marketplace.

Financial institutions will continue to explore the potential benefits of advanced technologies for the industry, including blockchain technology, robots, artificial intelligence, biometric authentication and the Internet of Things. For example, artificial intelligence has the potential to lower bank operating costs and enhance customer experiences through natural language processing and interactions.

Transformations to the business of banking came into focus in 2015. Some financial institutions explored big ideas on how to advance banking technology to stay ahead of fintech firms who are trying to push traditional banking aside. A trend is emerging in 2016, with banks and fintech firms partnering, and to some extent collaborating, with 2016 potentially producing mergers and acquisitions between banks and fintech start-ups.

In CCG Catalyst Pro research on Millennials and the Future of Banking, Millennials expressed a need for banking advice not only about mortgage or student loan lending but with money management. Paul Schaus, CEO and President, CCG Catalyst, predicts bankers will be “advisors” to the Millennial customers, who are asking for full financial management, including when to pay bills and how to save money.

The twist on where Millennials receive banker’s help will be a whole new opportunity for banks to deal with, as traffic into the branch declines. Banks will need to rethink from the perspective of the Millennial customer of how to bring them into the branch or what the physical structure of the branch will become. 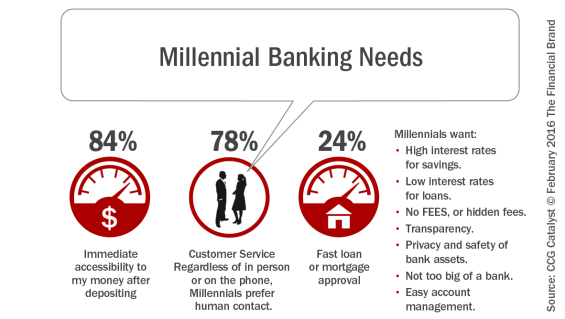 Emergence of the Internet of Banking Things (IOBT)

In 2016, the banking channels will take on an evolution as types of communication devices from Internet of Things will go way beyond the mobile phone. There was a hint of recognition from Samsung and MasterCard at Consumer Electronics Show (CES) 2016, as both will be exploring what payments mean from the home’s kitchen: imagine ordering groceries from the refrigerator and having them delivered to home by a driverless car. This evolution could be reality within the year. Dream a little deeper, as several Millennials expressed that the refrigerator may help with banking transactions and even provide a video link to the banker for help with financial management. (Catalyst Pro Group, 2016).

Gartner predicts that nearly 21 billion active IOT devices will be in use by 2020. IOT continues to gain in popularity, security experts caution and point out security risks. Before any form of banking could occur though IOT, vulnerabilities need to be addressed and prevented.

As consumers and retailers become comfortable with mobile payments, wearable devices for payments will be encouraged by tech firms and banking alike. Incentives to make transactions using these devices will have to be a part of behavioral conditioning to encourage increased usage. Such incentives include coupons, airline boarding pass vaulting, and loyalty cards. Incentives for usage is an unfamiliar gap that banks may need to fill to keep customers loyal and needs met.

According to the results of a survey of more than 100 financial service executives by Computer Services Inc. posted recently in The Financial Brand article, What are the Big Threats and Priorities for Banking in 2016, two-thirds of banking firms plan on increasing their investments in tech this year, and one in ten respondents said that enhancing the mobile experience will be their single biggest area of opportunity in 2016. Nearly half (40.8%) expected non-traditional services such as Apple Pay to have a positive impact on their profitability, by driving more transactions through the bank and increasing interchange income.

Another top strategic effort for 2016 is the implementation of EMV-enabled credit cards and debit cards, though widespread EMV acceptance largely depends on retailers, according to CSI. The report cited data from Paychex, in which 75% of consumers have received a chip-enabled card, yet only 47% of retailers and restaurants have switched to the EMV readers. However, increasing fraud will begin to put a financial strain on retailers, and when “the pain becomes too great,” more will begin to accept chip cards, CSI predicted.

Optimizing and Integrating the Branch Experience

Improving customer relationship management programs and optimizing branches are also among the most important initiatives financial institutions will focus on in 2016, survey respondents said. One way banks are “rejuvenating” the branch experience is by implementing secure wireless networks and core-linked mobile tablets.

In addition to moving many basic transactions to online and mobile channels, more banks are installing interactive video teller machines in branches to connect customers with remote tellers, augmenting the traditional teller lines, and creating universal banker roles to better address the customer needs that can’t be automated. However, to be most cost-effective, banks are selectively investing in these technologies to determine where they should be launched.

Other banks have begun to improve integration between the branch and other channels to enhance the in-branch experience and allow for increased convenience. Some have enabled customers to book branch appointments through their mobile app and other channels, while others have implemented push notifications to their customers via their mobile phones.

Finally, as banks grapple with declining fee revenue, more are implementing new ways to replace that lost income. Some are selling new fee-bearing retail deposit accounts, while others are marketing corporate banking services to niche companies.

To keep pace with increasing digital consumer demands and pressure  from fintech startups, banks will need to continue to transform – not necessarily “mimicking” fintechs, but finding ways to further enhance what they are known for: “high touch” services. By combining “high tough” with “high tech”, banking organizations will be in a position to leverage their competitive advantage of massive consumer databases to provide personalized solutions in real time.

The question still remains whether banks and credit unions will embrace advanced analytics to maximize their marketplace advantage.

2016 will be the tipping point for banks, as great change continues to occur. Banks will need to identify a transformation strategy, rethink competition and keep a watchful eye on trends to avoid falling further behind.