They say never bite the hand that feeds you. But that seems to be what Space Coast Credit Union did with an auto lending campaign attacking interest rate markups charged by dealerships. The credit union had to do a big U-turn after the auto industry protested, with some car dealers decrying the marketing initiative as a smear campaign.
Subscribe Now!

Few consumers are aware of “rate markups.” A rate markup (sometimes referred to as “buy-ups” or “dealer reserves”) occurs when a car buyer arranges for bank or credit union financing at the dealership, and the rate they get is marked up. It is a fairly common practice, encouraged by the indirect lending policies of both banks and credit unions, but some people feel these markups are “kickbacks” to car dealers.

The fact remains that most consumers have never heard of rate markups, and don’t know what they are.

Space Coast Credit Union doesn’t engage in rate markups, instead choosing to compensate its dealer partners using a flat fee. So they decided to create a consumer awareness and advocacy campaign calling attention to the issue. According to the credit union, rate markups average around 2.5% and gouge consumers for hundreds of millions of dollars. Space Coast wanted to get the word out, figuring they could grow their auto loan portfolio.

The credit union’s strategy made sense, and it sounds reasonable enough: build a marketing campaign that exploits and leverages a relevant competitive advantage. But…

Creating the Campaign: ‘Expose the Truth’

Back in April, Space Coast hid cameras in a couple Miami businesses and captured the unscripted reactions of patrons who were being discriminated against simply because of what they looked like or were wearing.

This footage would become the foundation for the credit union’s “Expose the Truth” campaign. In finished videos posted to YouTube on June 23 (four days after the campaign’s official launch), Space Coast equated the practice of markups to a restaurant charging more for a taco based on a customer’s arbitrary physical features. In one video, customers are charged an exorbitant amount — $58 — for fajitas simply for having “long black hair.” In another video, patrons at a sandwich shop were dinged with a markup if they were wearing “gold necklaces.” 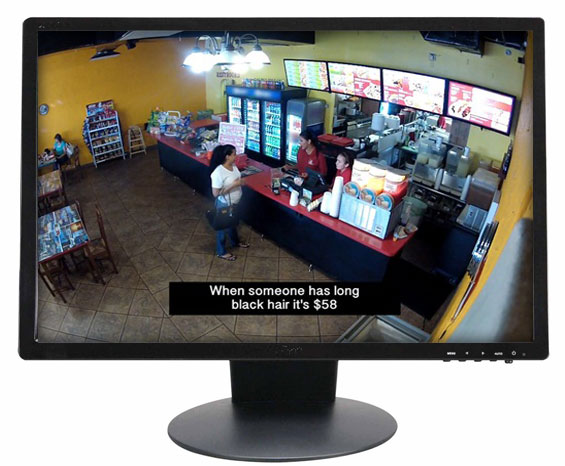 “Lenders conspire to charge you a higher interest rate than the rate you qualify for, often because of who you are or what you look like,” the videos claim. “Unknown to you, they unfairly mark up your rate, then pocket the difference with your hard earned money.”

Online ads and social media elements featured blindfolded consumers with the tantalizing message, “Only 21% know the truth, do you?”

“Space Coast Credit Union never has and never will engage in rate markups,” the campaign asserted. “It is our goal to save members $30 million in rate markups this year!” 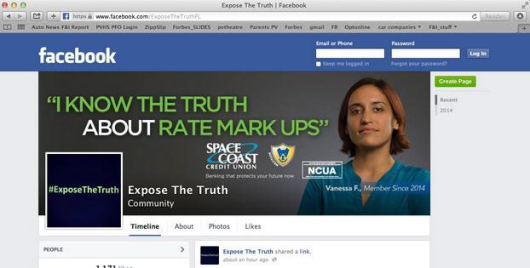 A Facebook profile (above) and online ad (below) for Space Coast Credit Union’s “Expose the Truth” campaign. 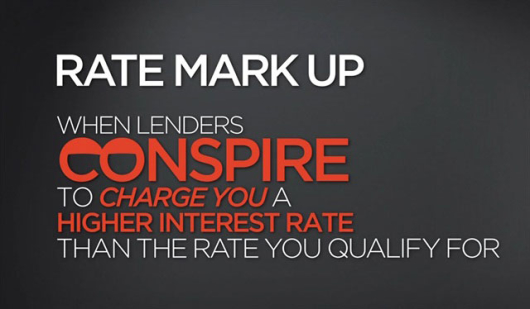 They Say Never Bite The Hand That Feeds You

The credit union’s primary audience — the general public — liked the campaign. Consumers responded favorably, and appreciated learning about a lending practice some critics call “deceptive.” (The CFPB has started poking around on the issue.)

But an important secondary audience — car dealers — were furious. They are already wrestling with a misanthropic image: the smarmy used-car salesman. They didn’t appreciate the ethical insinuations Space Coast conveyed in the “Expose the Truth” campaign. 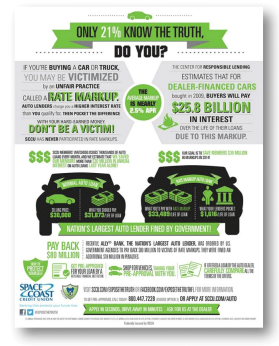 An infographic created by Space Coast for the credit union’s “Expose the Truth” campaign painting an unflattering picture of auto loan rate markups.

“Dealer advocates would say the campaign casually exaggerates how much dealerships earn in dealer reserve,” Henry continues. “The credit union claims the “average” markup is 2.5 percentage points, citing the Center for Responsible Lending in Durham, N.C., a longtime critic of dealers and lenders. In fact, dealer reserve is typically capped at 2 or 3 percentage points.”

“The SCCU campaign is nothing more than a rehash by another competitor of previously discredited arguments,” the NADA said in a statement. ” SCCU understands the need for dealers to be paid for their efforts in obtaining financing for their customers; SCCU simply cannot support the practice of rate markups.”

Space Coast, attempting to defend itself, issued its own statement in response, saying that “the campaign was not about auto dealers or the people selling vehicles, though recent automotive media coverage has been misinterpreted that way.”

The campaign had been slated to run through the end of August — terminated 51 days prematurely, and only

“We sincerely regret if any of our valued dealer partners misunderstood our message,” the credit union said in a formal apology. “We did not want to harm dealers. We have great respect and admiration for these local business people who have contributed to the growth of our communities, and we particularly appreciate the valuable service to our members.”

One industry watchdog who goes by the pseudonym “The Credit Union Geek” thinks he agrees the campaign should have been pulled.

“Its reception by their (Space Coast’s) valued partners — dealerships — was not considered,” he wrote on his blog. “Dealers don’t want to feel slighted by their partners, and do deserve their fair share for the work they do.”

Space Coast says car dealers continue to refer business to the credit union because “they value the relationships SCCU can bring. It’s proof that doing the right thing, and watching out for the best interest of the member is good business.”

Based in Melbourne, Florida, Space Coast Credit Union has $3.2 billion in assets and nearly 300,000 members.