Subscribe Now Get The Financial Brand's FREE Email Newsletter
Meta Financial was early in seeing the revenue potential of banking-as-a-service. Now among the top fintech partner banks, the company sees even more opportunity despite some neobanks obtaining or acquiring banking charters.

There was a time when any bank enabling a nonbank company to get into banking was considered a pariah. Now a slew of chartered banks and credit unions are itching to get a piece of that lucrative pie.

The rapid rise of fintech and digital financial services has blurred the lines between traditional banks and upstart digital providers. This is especially evident in the banking-as-a-service (BaaS) model and the role that an increasing number of FDIC-insured institutions are playing in enabling non-regulated fintechs and digital upstarts to offer deposit, payment, credit and other banking services without going through the onerous process of acquiring a charter on their own.

There are pros and cons to this “rent-a-charter” model. On the plus side, it offers a path for revenue growth during a time when both interest- and non-interest income have shrunk for many traditional institutions. On the other hand, banks that engage in this model run the risk of ceding the customer experience and relationship to the fintech on the front end. There’s also the risk that a fintech partner may go out of business or obtain their own bank charter by application or acquisition.

Still, the concept remains a popular one. CCG Consulting predicts that the number of financial institutions partnering with nonbanks will more than double by 2030. And those already in the business in general achieve above-market returns on equity, according to Andreessen Horowitz. 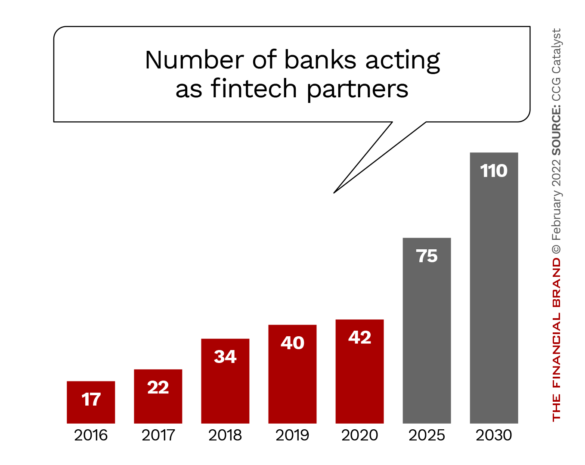 Partner to MoneyLion, Clair and Other Fintechs

One bank that has tread this path is Meta Financial Group, holding company of MetaBank NA. The Sioux Falls, S.D., institution has $8 billion in total assets and more than 800 employees. It may perhaps be best known as the issuer behind a wide variety of prepaid cards. In addition, many Americans became familiar with the company when they received stimulus payment in the form of debit cards during 2020 and 2021. MetaBank was Treasury’s financial agent for these Economic Impact Payment cards.

Dig Deeper: The Future of ‘Banking as a Service’

Beyond that, Meta Financial’s Meta Payments infrastructure enables fintechs, payment processers and merchants to move money quickly. One example is MetaBank’s partnership with Clair, a fintech that enables workers to get a portion of their wages early and aims to be a safer alternative to payday lenders.

For MetaBank, offering BaaS services has been a long-term part of its strategy.

“Meta has been a BaaS platform since the inception of our payments business line in 2004,” says MetaBank president Anthony Sharett, in response to emailed questions from The Financial Brand. He points out that the bank’s charter provides access to the full payments ecosystem, and that the institution can offer governance and compliance expertise to fintech companies.

MetaBank has been providing BaaS services to partners since 2004 and boasts returns well above banking industry averages.

Though there have been many regulatory changes as it pertains to fintechs since MetaBank began its BaaS services nearly two decades ago, and likely will be more, Sharett is confident the bank can adapt to any changes.

“Over the years, there have been regulatory evolutions, but we have grown alongside many fintech companies and adapted to regulatory changes,” Sharett says. “Our BaaS model serves a large consumer base through our network of fintech partnerships, and this infrastructure capitalizes on economies of scale and gives us a significant competitive advantage, particularly with our commercial finance business.”

It is also lucrative. According to a 2020 analysis by Andreessen Horowitz based on a three-average, MetaBank’s performance was well above industry averages for return on equity and return on assets (about 27% ROE and 2.7% ROA versus 10.8% and 1.2%). Only five of 30 partner banks listed by the firm had higher returns than MetaBank.

Being the bank partner behind numerous digital banking providers has many benefits, but also challenges. On the plus side, being a BaaS provider puts MetaBank at the center of the digital financial revolution.

“BaaS is essential in this new digital landscape,” notes Sharett. “We serve as a marketplace connector, allowing innovation to thrive, empowering our partners to solve new problems and delivering on consumers’ evolving needs and behavior.”

However, the constantly evolving world of digital financial services also poses challenges. MetaBank needs to be judicious in who it chooses to bring on as a partner and what new markets and lines of business to potentially become involved in.

“Our primary challenge is in balancing the need for constant evolution within the financial services marketplace and taking on strategic risks in emerging markets — while also driving forward our core purpose of financial inclusion for all and understanding emerging needs horizontally across the company,” says Sharett.

Fintech partner banks can lose choice clients who buy or apply for a charter. It's a risk MetaBank, at least, deems fairly small.

Then there is also the potential instability with fintech partners. Some fail outright, others — such as German neobank N26 — leave the U.S. market, and still others obtain their own charter by one means or another. Examples include SoFi, LendingClub and Varo Bank.

For partner banks, this means choosing fintech partners wisely, although not all changes can be foreseen. Sharett isn’t fazed.

“While there have been fintechs that go on to pursue a charter at some point, those are the exception more than the rule, leading us to believe that our strategy and model are sustainable.”

Read More: SoFi Gets Approval to Become a Bank – Should Legacy Banks Care?

MetaBank is planning on undergoing a rebrand soon. In a December regulatory filing, the bank noted that it “Entered into an agreement with Beige Key LLC to sell the Meta names and trademarks for $60 million.” The document also revealed that “The Company plans to use a portion of the proceeds to implement its new corporate name and brand, which is expected to be completed by the end of 2022, and estimates its rebranding expenses will range between $15.0 million to $20.0 million.”

While the name Beige Key may not mean anything to most, Reuters reports that the company is a subsidiary of Facebook owner Meta Platforms. MetaBank confirmed Meta Platforms’ role in the acquisition in the Reuters article but did not comment further. The concept of the metaverse is, of course, central to Facebook’s future, and if the social media giant were contemplating a foray into banking in the metaverse, owning the name MetaBank would certainly be useful.

MetaBank will soon undergo a rebrand, after selling its name and trademarks to a company affiliated with Facebook owner Meta Platforms for $60 million.

Regardless of what its future brand name becomes, MetaBank believes that the services it provides to fintechs will continue to be needed, as fintechs will have to offer a full range of financial services to survive.

“Previously a partner may have entered the market with one core product offering,” says Sharett, “but now many are focusing on ‘relationship services’ and growing with the customer to optimize the overall user experience right out of the gate.”

“It has become clear that providing singular products is not enough for fintechs to scale and profit. Looking forward, we can expect that digital offerings, simplicity of use, and increased value to the end-user will continue to be change drivers.”