Subscribe Now Get The Financial Brand's FREE Email Newsletter
Cash may never become extinct, but it’s on the endangered species list as consumers increasingly use cards and P2P apps for everyday purchases. Even so, they still insist on a cash option. To compete with fintechs in a 'less cash' future, banks must have advanced digital capabilities but still accommodate cash-loving customers.

Bank of America CEO Brian Moynihan said at Fortune’s Brainstorm Finance conference in June 2019 that the bank has “more to gain than anybody” from a cashless society. Sure, with over 4,000 branches and a gazillion ATMs all needing to have cash delivered and picked up, the cost savings would be astronomical.

But good luck with that. Moynihan will likely be retired long before cashless happens. In fact, it’s looking more and more like consumers aren’t willing to completely give up greenbacks, even though they increasingly use digital payments.

Consumers and businesses have steadily used less cash over the past decade, and predictions of a cashless society became common during the pandemic, when people thronged to new digital payment options, due for a time to fear of touching cash.

Three in five consumers believe the U.S. will become a cashless society at some point in their lifetime, but that figure hasn’t moved in six years.

As businesses and consumers realized the benefits of digital payment options, use of cash is unlikely to ever return to it pre-pandemic levels. An August 2022 Gallup study found six in ten respondents say they make “only a few” or no purchases with cash today, double the 32% that said so only five years ago. In addition, only 13% say they make “all” or “most” of their purchases with cash, compared to 28% five years ago. 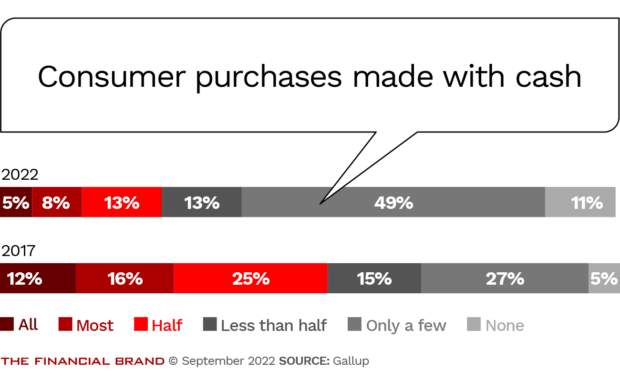 Gallup attributed this change to online shopping, more merchants accepting electronic payments and an increase in self-checkout and mobile payment options. However, while three in five consumers believe the U.S. will be a “cashless” society at some point in their life, many still want cash as an option. In fact the percentage of people who think it’s likely that society will be cashless in their lifetime is essentially unchanged from six years ago, despite the shift to digital. 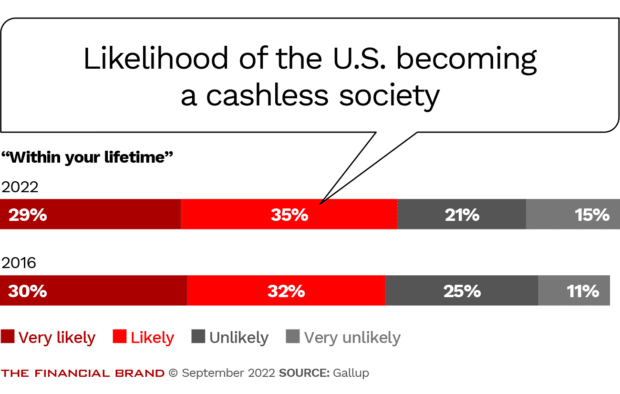 “People aren’t entirely comfortable getting rid of cash as a payment option,” Jeff Jones, Gallup Senior Editor, tells The Financial Brand. “They are still some situations or circumstances they encounter, or can think of, in which they would like the flexibility of paying with cash.”

More Vendors Say No to Cash

Enabled by cards, mobile wallets and services like Square, a growing number of businesses and vendors no longer even deal with cash. Fenway Park, home to the Boston Red Sox, went entirely cashless in April 2022, a move it said was to improve the speed of service. Food trucks, takeout restaurants, niche services and schools are increasingly moving to digital payments.

Even such cash-based transactions, such as tipping or paying a friend, can now be settled digitally using P2P apps. A May 2022 survey by Lending Tree found that 84% of consumers have now used a P2P service app such as PayPal, Venmo, CashApp or Zelle.

“More businesses are taking digital payments because there are more inexpensive solutions in the marketplace that don’t require big investments and hardware,” says Sarah Grotta, Director of Debit and Alternative Products Advisory Service at Mercator Advisory Group, in an interview.

Continual improvements in digital payments are likely to further replace cash in the coming years. In February 2022, Apple announced it would soon release Tap to Pay on iPhone, enabling users to accept money or pay simply by tapping their iPhones together. The development of such capabilities for Android phones would be a game-changer, as most American adults already have phones capable of making such payments.

The Holdouts and the Case for Cash

Some analysts say we’re not going to a “cashless” world but to a “less cash” world that relies less on paper money, but doesn’t eliminate it. Many consumers still like the option to use cash, and more than 60% say cash protects privacy, is safe to use and is important for society, according to the 2021 U.S. Health of Cash Study by Javelin Strategy and Research.

“Cash is declining, but I don’t think we’ll wake up one day, and it’s gone,” says Grotta. “It will be more of a continued, downward slope, but there are still people who use cash in all generations.”

According to the Gallup poll, many lower-income and older consumers still rely on cash. Those who earn less than $40,000 annually and who are more often unbanked more commonly use cash for purchases, by a rate of 22%, compared to only 5% who earn $100,000 or more.

Nearly three-quarters of those age 65 and over prefer to have cash at all times, compared to a majority of those under 50 saying they are 'comfortable without cash,' says Gallup. 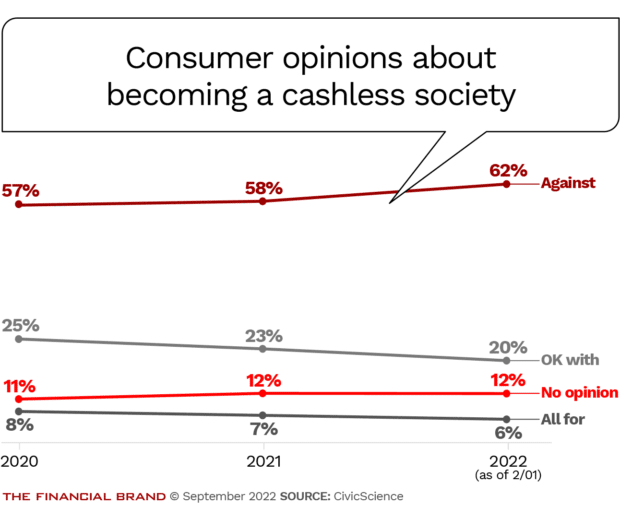 Consumer advocates also say that cashless businesses discriminate against lower income and minority citizens and those without bank accounts. The Federal Reserve notes that “private businesses are free to develop their own policies on whether to accept cash unless there is a state law that says otherwise.” However, the Payment Choice Act, being floated in the Senate, would require businesses with a nationwide storefront presence to take cash for transactions less than $2,000.

Some states and cities, including San Francisco, Washington, D.C., New Jersey and Colorado have laws requiring businesses with a storefront to take cash.

Changes Banks Must Make for a ‘Less-Cash’ World

Overall, both merchants and banks can benefit from less cash or a cashless world. Cards and digital payments can come with merchant fees, but those fees are transparent, and the transactions are quick and efficient, Sarah Grotta observes. And, as mentioned, cash comes with significant handling costs.

To benefit most from the digital payments revolution, PwC points out that banks must keep pace with fintechs in terms of their technical capabilities. As merchants move from legacy systems to integrated POS systems, banks should invest in new technologies to meet different needs. This may require partnering with outside firms to build vertical-specific software and to design for channels like tablets which are increasingly being used by small businesses. This is an area in which big fintechs such as Block (Square) and Stripe are strongly established.

Banks should also provide more “money management” capabilities, says PwC. Much like mobile smartphones give consumers more flexibility to manage their money, integrated POS systems offer merchants more options to manage their business. Some payment companies are now adding payroll and cash management capabilities to their payment solutions or partnering with banks to provide their merchants with branded checking accounts.

“From a bank’s perspective, offering banking products and extending their licensing into these types of partnerships may allow the bank to acquire small business customers more quickly than if it did it alone,” say PwC analysts.