Subscribe Now Get The Financial Brand's FREE Email Newsletter
New data reveals that while consumers still rely on credit cards, many are drawn to the convenience and user experience that Buy Now, Pay Later offers, and in fact would happily use it to replace the plastic in their wallets.

When it comes to financial products, buy now, pay later (BNPL) services continue to be the big winner from the Covid-19 pandemic.

Use of BNPL surged over the last 18 months or so, especially among Millennials and Gen Z, who are drawn to these platforms for their convenience and the ability to purchase items they would normally not be able to afford.

And according to a new report from Marqeta, the BNPL tsunami shows no sign of abating. The payments tech company surveyed 3,500 people globally in July, using Propeller Research to reach people in the United States, United Kingdom and Australia. The three countries have all seen rapid adoption of BNPL usage.

What they found is that 27% more consumers said they’ve used a BNPL service this year compared to those surveyed in 2020; 78% of BNPL users surveyed said they plan to use it more in the future; and 59% of consumers who have used a BNPL solution said they find it easier to manage multiple plans than their credit card statements.

Read More: One Fintech’s Plans Reveal How BNPL Could Go Further Into Banking

This explosion in growth for firms in this space has been evident in recent months. Affirm engaged in a partnership with Apple, while Klarna raised more than $600 million from Softbank. Affirm’s stock price has nearly doubled over the last six months, and Square in August purchased BNPL firm Afterpay for $29 billion. More recently, Goldman Sachs announced it is acquiring home improvement BNPL lender GreenSky for $2.2 billion.

Use of Buy Now, Pay Later services skyrocketed during the pandemic, and this trend shows no signs of abating.

“Not only has a significant proportion of the population tried [BNPL], it is proving to be a sticky and positive consumer experience,” the Marqeta report reads. “BNPL services are building in new users at a rapid pace, with 33% of consumers surveyed who’ve used BNPL saying they started within the last 18 months, after the COVID-19 pandemic began. Crucially, with consumers also listing the cost of a credit card as a major detractor, 50% of respondents said that paying zero interest was a major appeal of BNPL.” 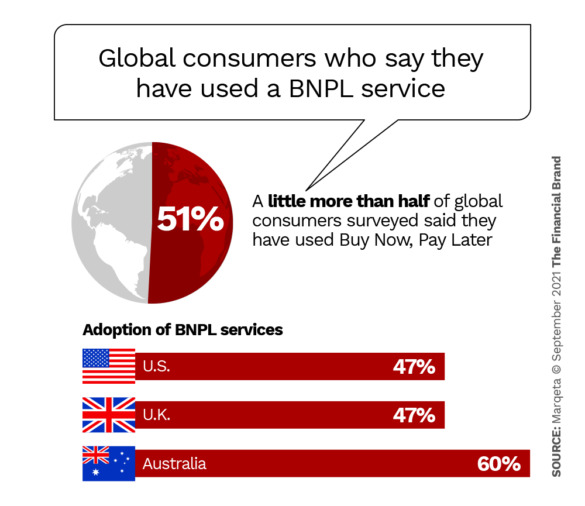 According to Darren Mowry, chief revenue officer at Marqeta, the rise in popularity of BNPL services is likely not just a temporary phenomenon.

“What the data tells us is that this is not just a Covid-based trend,” Mowry tells The Financial Brand. “Consumers are really attracted to the user experience and other aspects of BNPL. BNPL is really at the very beginning and there is a tremendous amount of growth potential here.”

So where does all this leave the old stalwart, the credit card? According to the report, the credit card is still king, but that could change if BNPL continues its dramatic rise. 78% of American consumers reported using credit cards and 70% reporting using them at least once a week. With the pandemic bringing on new financial distress, credit cards were also a reliable source of stability for consumers.

Over half of consumers said they increased their credit card usage during the pandemic and 65% said they used credit cards to help make ends meet. Credit cards also provided additional layers of support for users, with over two-thirds of consumers saying cash back has been their most valuable reward.

According to the report, the biggest benefits of credit cards were being able to make a purchase without the funds necessary (44%) and helping consumers not have to carry physical cash (39%). Americans were the most attracted to the prospect of credit card rewards — which the rest of the world didn’t see as appealing in such high numbers.

Interestingly, Americans also answered in much higher numbers than other parts of the world that building a good credit score was a significant factor in the usage of credit cards.

Another good sign for the credit card industry: Among 18-25-year-olds that were surveyed, 90% of Australians in this age group as well as 87% of Americans, and 82% of U.K. respondents in this same demographic said they had their first credit card by the age of 21. Attracting younger customers does not yet, seem to a problem for credit card issuers. 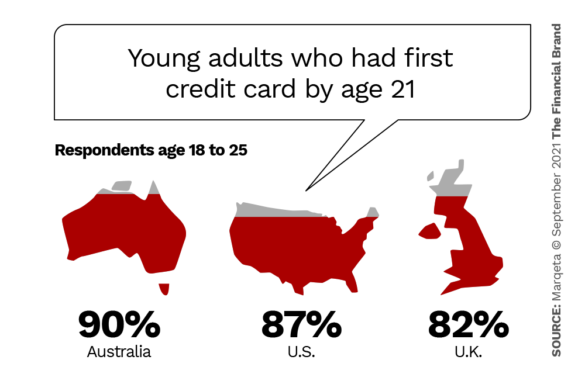 “Just the sheer amount of credit that has been issued through the credit card system means that credit cards are not going away anytime soon,” Mowry observes.

Why Credit Cards Are Under Growing Pressure

Several trends in the survey also point to BNPL gaining in popularity on credit cards, as well as increasing dissatisfaction with credit cards. When asked what the biggest deterrent to acquiring a credit card was, 52% of global respondents said high interest rates were a factor, while 46% said they didn’t like incurring debt, and 33% were dissuaded by high cost of carrying a credit balance and annual account fees.

While many consumers rely on credit cards for everyday use, 59% of BNPL users say they would be happy using it to replace their cards.

Mowry notes that a worrying trend for credit cards that the survey uncovered is that BNPL users could see these services as a potential long-term solution, a feeling especially prevalent among younger consumers. Overall, 59% of BNPL users said they would be happy using BNPL to replace their credit cards. 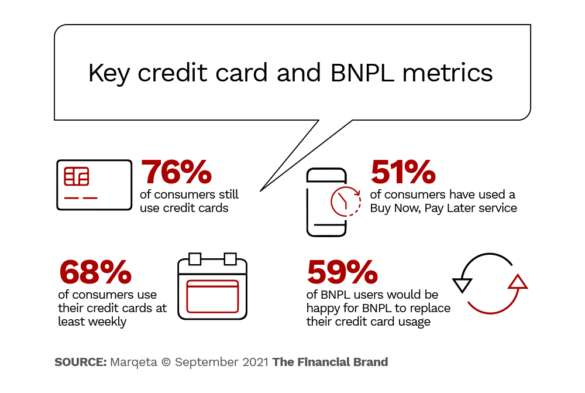 Furthermore, the survey found that BNPL services consistently got higher marks in user experience, and the majority of those surveyed reported that managing their BNPL plans is easier than managing credit card statements. This shift means that consumers now have greater expectations on how the user experience should be and will be more demanding of their credit card providers.

“There is a huge threat but also a huge opportunity for credit card providers,” says Mowry. “There’s an opportunity here for them to rethink the user experience, to be more frictionless and offer more personalized rewards options.”