Subscribe Now Get The Financial Brand's FREE Email Newsletter
Some think a level playing field will arrive now that the Consumer Financial Protection Bureau is writing rules for buy now, pay later programs after a probe of the major fintech BNPL players. But banks offering their own version of the popular plans could get dinged as well.

Bankers and other consumer lenders will need to watch closely as the Consumer Financial Protection Bureau begins writing rules in the wake of a major probe of the buy now, pay later business. Some traditional institutions may be cheering the prospect of BNPL rules, but they need to beware of getting hit by backsplash.

After studying nonbank pay-in-four plans, the bureau will initially deal with bringing nonbank BNPL providers under its oversight through regulations or some other type of rulemaking.

The bureau has already issued an invitation to BNPL firms to volunteer for examinations, which would expand CFPB's presence in the nitty gritty of consumer lending even further.

The bureau requested immense amounts of data from five leading nonbank BNPL providers — Affirm, Afterpay, Klarna, PayPal and Zip — in late 2021. Its study based on the information and other research did not look at BNPL beyond pay-in-four and did not examine BNPL offerings made by JPMorgan Chase, American Express and other credit card issuers. Nor did the study include big tech BNPL activities, such as Apple’s efforts.

All of this untouched territory is fair game, however, and CFPB Director Rohit Chopra, in a statement accompanying the bureau’s report of its study, specifically referred to “big tech payment systems, which appear to be integrating buy now, pay later into their offerings.” The bureau already has a probe underway of big tech financial activities that began with a request for information in fall 2021. Results of that project haven’t been announced yet. (The companies include Amazon, Apple, Block, Google, Meta, and PayPal.)

Even as staff proceeds with regulating nonbank BNPL players, something more is in the offing. Chopra has already instructed his staff to dig further into BNPL firms’ data surveillance practices. This relates to BNPL providers’ use of apps that accentuate their programs’ role in affiliate marketing of merchants’ goods and services.

Chopra suggested that some of BNPL firms’ data surveillance practices “may need to be curtailed.” He added that the bureau would be coordinating its activities in this area with the Federal Trade Commission, which is already developing rules on data surveillance.

As traditional financial institutions delve further into data mining they will need to monitor where CFPB goes with this next step.

How CFPB Buy Now, Pay Later Rules Could Shape Up

In its report CFPB acknowledges that some states regulate nonbank buy now, pay later firms’ offerings as finance companies, but federally they have managed to avoid most aspects of regulation. CFPB’s decision to move ahead with regulations doesn’t come as a surprise. While the study was underway, Alyson Clarke, Principal Analyst at Forrester, suggested in an earlier article that providers were likely already preparing for operations under federal BNPL regulation.

In his statement Chopra referred chiefly to how rules on credit cards require lenders to verify consumers’ ability to repay card debt. He also noted that the law requires card-related penalty fees to be “reasonable and proportional.”

The report details these areas, all of which could be included in CFPB rulemaking:

• Lack of standardized disclosures. While traditional lenders must comply with truth-in-lending rules’ often arcane disclosure requirements, there are no federal rules like those for BNPL at present. BNPL firms make varying disclosures.

“The lack of clear, standardized disclosure language may obscure the true nature of the product as credit and make important information about loan terms, including when and how fees are assessed, and when payments are due, less accessible,” states the CFPB report.

• Dispute resolution gaps. The report points out that when a credit card charge is being challenged by the consumer, they are not required to pay it. By contrast, the report found, consumers using BNPL financing are sometimes required to pay their installments while they are disputing their charges.

• Compulsory use of autopay. The report says that most of the BNPL providers it studied require commitment to autopayment of installments. Most typically this means agreeing to having payments made through consumers’ debit cards. (About 10% of payments go through credit cards, according to CFPB’s study.)

It is often difficult to undo the autopayment, which CFPB points out can result in extra costs to consumers. These include overdraft fees if the charge hits a debit card for more than the balance and interest charges if an autopayment on a credit card hits when there is already an outstanding balance.

Doubling Down on Credit:

If a credit card is used to autopay BNPL installments a 0% interest BNPL plan ends up costing the consumer interest anyway.

Beyond that, while an automatic charge to a credit card satisfies the BNPL debt, it may dig the consumer deeper into overall card debt, according to the bureau.

• Late fee confusion. Charging late fees is not regulated and is inconsistent in the industry, according to the report.

• Overextension of consumers’ ability to handle debt. CFPB is concerned about people using BNPL too much and going into delinquency.

A key concern for the bureau in this area is “loan stacking,” when people begin borrowing from multiple BNPL providers. Even with access to reams of BNPL providers’ data, the bureau found that it could develop no sense of how often consumers are maintaining multiple relationships with different providers. Chopra criticized the national credit bureaus for being “slow to develop mature credit reporting protocols with respect to buy now, pay later.”

In comments dating back to his Senate confirmation hearings Chopra has expressed concern with the data financial companies gather and how it is used. This has become a major concern for him in the BNPL area as providers move towards apps that become marketing appendages for merchants with strong reliance on data gathering and analysis.

“The practice of harvesting and monetizing consumer data across the payments and lending ecosystems may threaten consumers’ privacy, security and autonomy,” the report states. “It may also lead to a consolidation of market power in the hands of a few large tech platforms who own the largest volume of consumer data, reduce long-term innovation, choice and price competition.”

Two broad areas arising from data are of concern to the bureau. First, there’s the use of individuals’ demographics, psychographics and behavioral data, to help choose specific brands and products to promote. Second, the bureau is concerned that data can be used by merchants, working with BNPL providers, to tailor offers to consumers to an unprecedented degree. This would include user-specific discounting practices, Chopra said in the statement.

Driving the greater interest in data among the BNPL lenders is changing economics of the original business. Merchant discount fees are falling due to increasing competition in the BNPL space, funding is becoming more expensive, and greater provision must be made for credit losses.

The chart below from CFPB shows how “net transaction margin” for the five BNPL lenders studied has been falling, and will continue to fall in 2022.

“In the merchant partner acquisition model, BNPL lenders position their products as payment alternatives to credit cards to ‘pull’ customers through the conversion funnel,” the bureau report states. “In the app-driven model, lenders’ primary role is as a marketing platform to ‘push’ customers to retailers via referral clicks.”

Deeper Understanding of a Major Competitor for Credit Cards

The bureau study differs from other research on data surveillance because it is based on actual lending data provided by the five firms mentioned, rather than polls of consumers regarding their use of BNPL.

Some nuggets from the study of the five companies of interest to lenders:

The study found that while BNPL credit is most popular with younger consumers, the study found the plans are much more popular among younger Millennials (which CFPB defined as 25-33 year olds). This was followed by older Millennials (defined as 34-40 year olds). Older Gen Z (18-24) consumers weren’t as keen on BNPL, even though some think programs are aimed at them, the report noted. 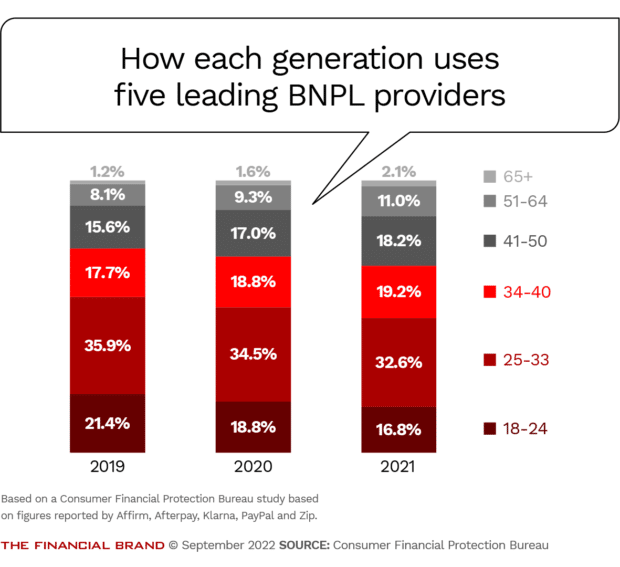 The study found that Gen Z consumers were more likely than any other demographic group to have defaulted at least once on a BNPL loan. Except for the oldest group, 65+, the younger the borrower, the more likely they will default. The report noted that this synchs with credit card payment behavior as tracked in the New York Federal Reserve Bank’s quarterly consumer credit report. 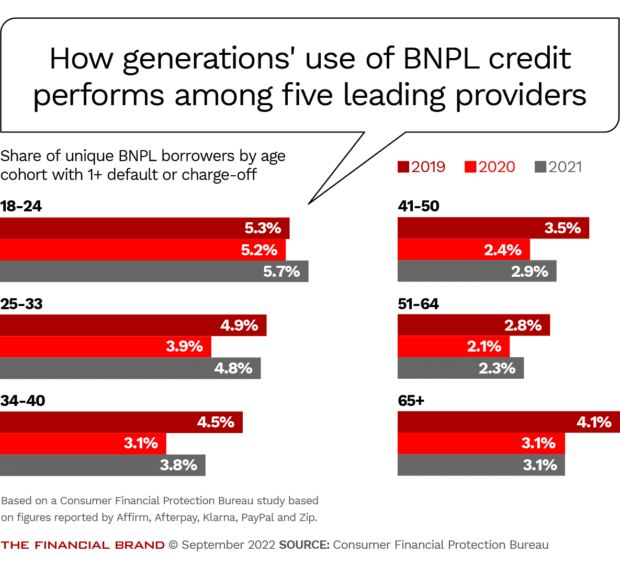 Among some consumers usage is quite high. Based on the companies data, CFPB found that 4% of consumers have ten or more BNPL loans, and 15.5% have five or more loans.