Subscribe Now Get The Financial Brand's FREE Email Newsletter
Consumer adoption of open banking might be the most contradictory truth in finance, given that most people continue to utilize the features it provides while also admitting they don't trust fintech companies to manage their money. Traditional banking providers must understand this situation and what the trajectory of open banking looks like in the U.S.

More than three out of every four people (81%) have linked their primary banking account to a fintech tool — making it a regular part of their financial routine — according to a new Mastercard report. Several populations come in even higher than the overall average. For example: Affluent Black populations, 94%; Gen Z, 93%; Millennials, 92%; Hispanics, 89% and Black consumers overall, 88%.

But, there is a major contradiction within these numbers. Although most people have adopted a form of open banking, 45% of Americans haven’t even heard the term ‘open banking,’ according to a separate survey. And very few people say they actually trust fintech companies to handle their financial data. In fact, only 14% told Mastercard they even trust linking a fintech account to their primary bank account.

Yet, they do it anyway.

The potential opportunities and upsides of open banking are large, especially in an era of personal freedom advocacy. Major markets around in the world have integrated open banking and open data into their banking culture, mostly by regulatory decree.

Over three quarters of people are linking their primary bank accounts to an external fintech account even though only 14% say they trust this process.

There are no such regulations in the U.S., so that even though consumers readily link fintech apps to their primary banking accounts, financial institutions for the most part must deal with the risks of open banking, regardless of whether people fully understand the concept or not.

For its open banking survey, Mastercard surveyed over 4,000 United States and Canadian customers. The multinational payments company says that, in its survey, it asked respondents to “talk about how they feel when it comes to sharing personal financial data, what makes for a trusted experience and more.”

Read More: Will Regulators Stuff the Fintech Genie Back into the Bottle?

Over the last decade, people have grown more familiar with the opportunities of digital banking. Now, almost three out of five U.S. consumers say they feel ‘very confident’ using technology to manage their cash, as noted in Mastercard’s report, and over nine out of ten (93%) say they do in fact use technology for that purpose. To top it off, not only are American consumers linking accounts, but large portions also “have a ‘set it and forget’ mindset once accounts are linked.”

Time and time again, we hear that people use different digital banking methods because of the convenience, which is true. Mastercard says that people “were looking for products that save time and require less work.” 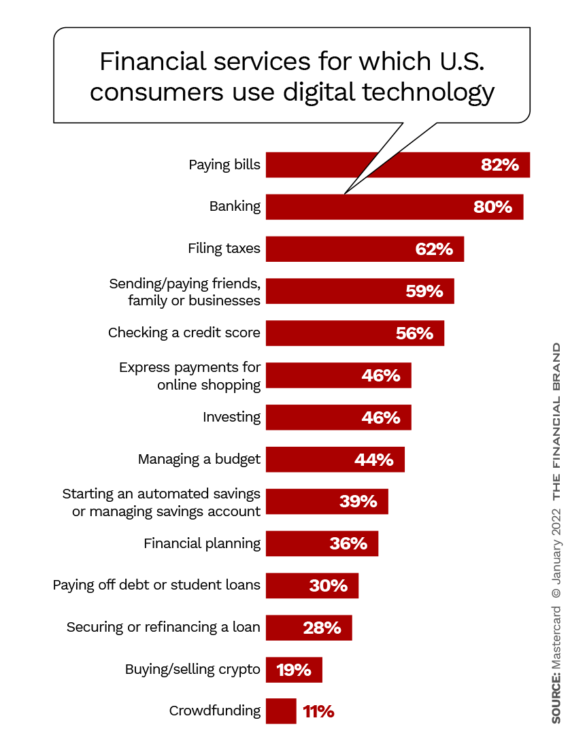 At the end of the day, linking accounts and using technology solves many of the average consumer’s needs. For instance, Mastercard found that most respondents are looking to save time and money by automating their finances. They also want a banking experience that “offers advice via a holistic financial view” by simplifying loan applications and assurance that they have control — at the end of the day — of their personal information and how/when it is shared.

“This research demonstrates that consumers are already connecting their data to conveniently manage their financial experiences, and they’re enthusiastically looking for what’s next. With the rise of open banking, the way we think about money will never be the same,” notes Mastercard.

Dig Deeper: Why Open Banking Is a Must-Have for U.S. Financial Institutions in 2022

But, there is plenty of risk when it comes to conducting financial business online, let alone allowing technology companies to access consumers’ banking data — and people seem to grasp this. Just a third of respondents (32%) admit they ‘strongly trust’ fintech providers with financial data while one in five say they ‘strongly distrust’ them, as shown in the chart below. On the other hand, over half (55%) say they strongly trust traditional financial institutions, while just 6% strongly distrust them. 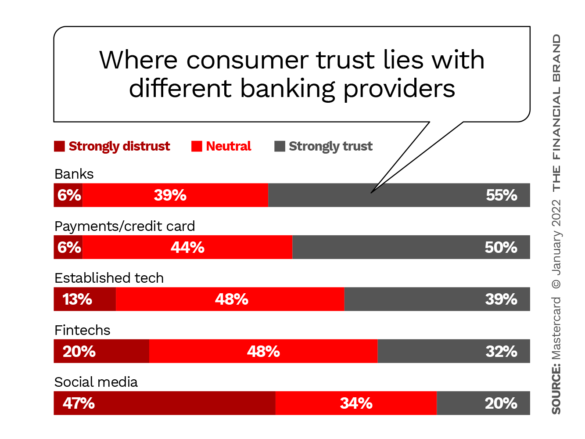 This can be seen too in how people feel about having fintechs they use connect to traditional banking accounts. As mentioned earlier, only 14% of people say they trust a fintech company to securely link with their primary bank account, in comparison to over half (52%) saying the same of payment networks and credit card companies.

Hold Onto the Crown:

Banks and credit unions still have the upper hand when it comes to consumer trust — more than half of people say they strongly trust traditional providers with their data in comparison to only 32% saying the same of fintechs.

The upside of the open banking revolution for consumers is that people could gain access to more of their own financial data their existing banking providers have been collecting for years. And more people are utilizing multiple banking providers — in a mix of both traditional and digital-only — to complete their banking needs.

“For too long, individuals and families haven’t reaped the same benefits of using their own data. The technology has been too expensive, or the ability to collect all that data and analyze it has been cumbersome,” Mastercard states. 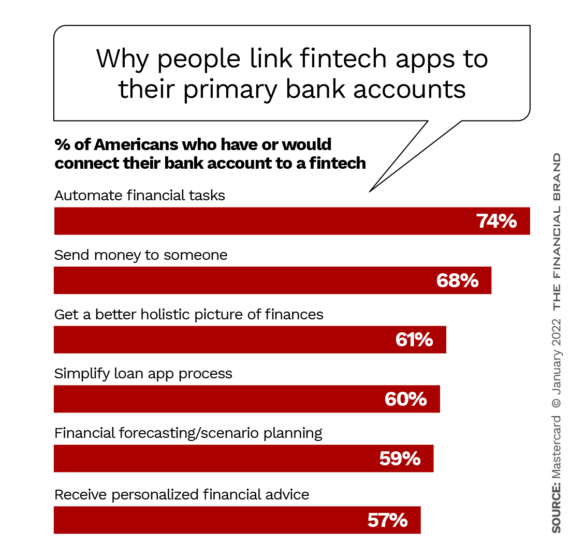 But, there is still a risk — and it is one that financial regulators are scrambling to tackle.

Where Regulatory Agencies Are Leaning

Part of the reason why open banking adoption is taking longer in the U.S. is because regulators there are approaching open banking carefully and slowly. While the U.K. and the E.U. have taken advantage of the opportunity open banking provides, the lack of enabling regulations in the U.S. has left the private financial sector to handle it on their own.

“Centralized rulemaking from agencies like the Consumer Financial Protection Bureau (CFPB) could help consumers warm up to the idea of sharing their banking data with fintechs, which fintechs will need to compete with incumbents for a larger share of consumers,” notes Tyler Van Dyke, editor at Insider Intelligence, regarding the Mastercard report.

U.S. regulators and lawmakers have not been entirely cold toward the idea of open banking. The CFPB first proposed regulations to implement Section 1033 of the Dodd-Frank Act — which deals with financial data access and sharing — in 2020. Yet, despite both the Biden administration and lawmakers urging CFPB to finalize the rules, it hasn’t happened yet.

Until then, the private sector is filling in the gaps. Data aggregators — such as Plaid — have established data sharing facilities to help financial institutions safekeep consumer data as well as be a third-party linking service. Similarly, organizations like The Clearing House (TCH) and the Financial Data Exchange (FDX) have created data sharing standards to streamline the risk evaluations of data aggregators and financial apps by financial institutions.

Chris Dean — former CTO at both Standard Treasury Bank and Silicon Valley Bank and now the Founder and CEO of BaaS software company Treasury Prime — says he, for one, is very excited for the new regulation. “Boy, I really really want this to happen,” he told Protocol, although he also says he has “no faith” that it will happen.

“The largest banks — the top five to 10 banks — they have to be the ones who say it’s okay, because that’s where the majority of accounts are,” Dean explains. “Until they give the thumbs-up that they really want to do this, I do not have a lot of faith here.” He goes on to say that, even if the U.S. were to incorporate open banking regulations similar to the ones that current exist in Europe, it would still take five to ten years to actually implement.

Regardless of how long it takes, most observers believe some form of open banking is inevitable in the U.S., and in many ways, as the Mastercard survey shows, it’s already happening. If banks and credit unions can help their consumers understand open banking and its risks and benefits, all the better. It very well could create a stronger sense of loyalty between consumer and banking provider.

“Open banking empowers consumers to benefit from their financial data through a wide variety of third-party apps and services that utilize that data to offer new money experiences,” the Mastercard report reads. “Financial institutions, fintechs and others can utilize open banking solutions to drive innovation such as creating the next personal financial management experience, revolutionizing money movement and payments or developing a digital lending experience.”