Subscribe Now Get The Financial Brand's FREE Email Newsletter
Goldman Sachs forecasts further reductions in home sales and a fall and then flattening of home prices. This will further erode the primary mortgage business, already down as high rates have severely squashed refinancing business. Falling prices will impact the home equity credit business, which had been building back.

Rising mortgage rates and decreasing affordability of houses in the U.S. have already slammed many parts of the home lending business, prompting major layoffs. Goldman Sachs predicts things will grow worse going into 2023 as the housing downturn declines further.

The trends forecast by the investment bank could impact not only mortgage lending, but also home equity lending. Equity credit had seen a resurgence in the wake of rising home prices but has already been affected by shifts in home prices in some markets.

“Higher mortgage rates and reduced affordability are not the only drag on housing,” Goldman Sachs stated in a report. “Existing home sales and building permits have fallen more sharply this year in regions where they increased the most in the earlier part of the pandemic, suggesting that the recent declines have also reflected the partial retreat of a pandemic-related boost to housing demand.”

The Home Sales Trend and the Elements Behind It

Goldman Sachs projects that home sales are going to fall further. There has been some recovery in inventory of new homes for sale, but the firm points out that many of those are not yet completed. Indeed, some haven’t even been started yet. This is due to supply issues, among other reasons. The report pointed out that the quantity of completed new homes available for sale are at record low levels. 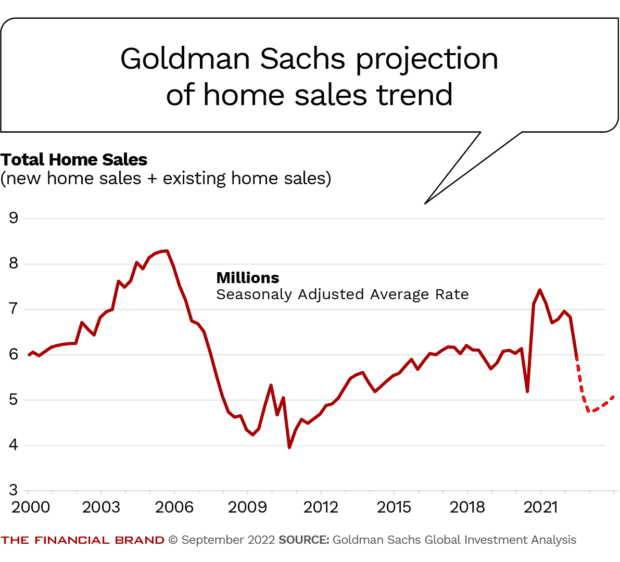 The Goldman Sachs forecast comes on top of a massive drop in sales of both new and existing homes, which the firm said has fallen by approximately 30% since the peak in October 2020. The bank’s analysts said this was higher than initially expected because the Federal Reserve raised rates more quickly than anticipated.

In early September 2022 Freddie Mac reported that the average rate on 30-year fixed-rate mortgages had risen to 5.89%, more than twice the level of the year earlier and the highest average rate seen in 14 years. Nearly three out of four consumers say “it’s a bad time to buy” according to Fannie Mae’s Home Purchase Sentiment Index report. The company’s sentiment index has been falling for six months.

Less optimistically: “The combination of much higher mortgage rates and rising home prices has made the notion of home buying simply unaffordable for many prospective buyers, which threatens to drive loan volume down even further,” said Rick Sharga, EVP of Market Intelligence, at ATTOM, a real estate data firm.

Prices Appear Poised to Come Down and Flatten Out

In its sentiment research, Fannie Mae indicates a significant decline in consumers considering selling their homes in the hope of obtaining high prices. The company said this indicates that homeowners expect to see prices rise more slowly or to begin falling.

Goldman Sachs analysts believe home prices will trend down in 2022, into 2023, and that they will flatten out, as demand falls off. 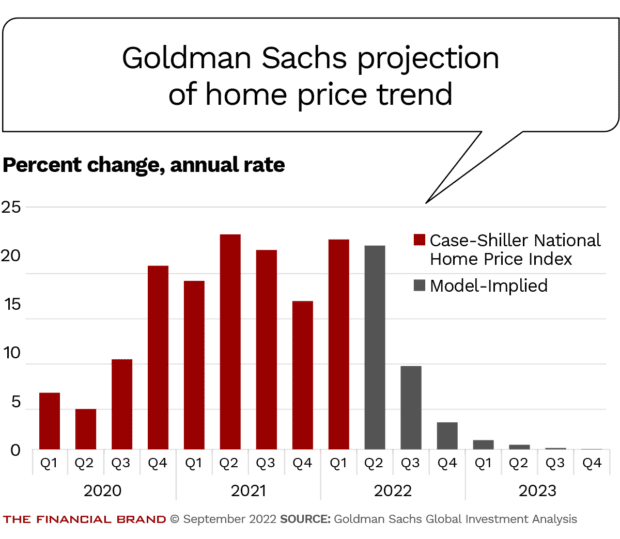 This projection dovetails with the rise in home equity lending, which gives homeowners means of extracting funds from home ownership. “Tappable equity” is the portion of home equity that a homeowner can borrow while maintaining at least a 20% stake in the home’s value.

Keeping an Eye on Home Equity Lending Versus Price Risk

Tappable equity had its tenth consecutive quarterly record high in the second quarter of 2022, reaching $11.5 trillion, according to Black Knight Mortgage Monitor. That represents an increase of 25% over the same point in 2021. However, the research firm says the highest point seems to have been reached in May 2022, on a national basis.

More locally, the falloff has been greater. “In some markets, equity pullbacks have quickly become fairly significant,” Black Knight stated, “with the five most equity-rich West Coast markets shedding 10-20% of previously available tappable equity from April through July.”

Falling prices would forestall some growth in home equity credit balances, the firm suggests. Black Knight forecasts that the third quarter of 2022 could see the first drop in tappable equity since 2019.

One encouraging finding in Black Knight’s research is that the firm finds that total market leverage, reflecting both first and second liens, has been conservative — “just 42% of mortgaged homes’ values, the lowest on record.”