Subscribe Now Get The Financial Brand's FREE Email Newsletter
Gen Z and Millennials still express a strong level of trust for banks and credit unions, but trust doesn't lead to loyalty anymore. Younger consumers are increasingly looking to fintechs for superior digital capabilities and cryptocurrency access. They're also quite willing to leave banks that don’t meet their standards for sustainability and diversity.

Fintechs have evolved from being an “existential threat” to traditional banks to being “the key to success” via partnering. In reality, both scenarios coexist. And while “partnering” is the more recent theme, the competitive threat, in many respects has intensified.

The Bank Administration Institute found this in conducting research into top banking trends and challenges. The organization uncovered a highly relevant fact: rapidly growing interest in cryptocurrency and high expectations around sustainability and diversity among younger consumers, combined with their natural preference for digital products, is increasingly luring these consumers away from traditional banks and credit unions and into the arms of fintechs.

BAI interviewed both banking leaders and consumers to learn how channel preferences and attitudes about banking are changing relationships. While older consumers may care more about interest rates and branches, and all consumers are sensitive to bank fees, Millennials and Gen Z consumers put much more value on digital capabilities and social issues and are willing to take their business elsewhere when a company doesn’t align with their values.

Consumers who would now consider banking with a nontraditional institution like Apple or PayPal:
57%

The survey data put numbers around the notion of the “fragmentation” of banking relationships as well. The number of consumers who do their banking with only one provider, for example, drops sharply from older consumers to the youngest banking customers. Significantly, the data is not a forecast but a report of actual behavior. Also notable is that even among Baby Boomers, only a little more than half use just one bank. 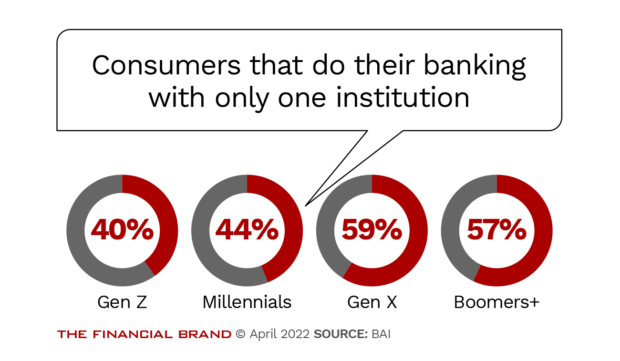 Some banks may to be tempted to dismiss the preferences of younger generations, since they “don’t have much money.” But Gen Z and Millennials could be a $60 trillion group once they inherit their parental wealth, observes Niamh Cunningham, COO of Rival Technologies.

Here are four ways banks and credit unions can retain and grow their relationships with younger consumers:

1. Double Down on Digital and Think Like a Fintech

Even though more banks and credit unions are aware of their digital banking shortcomings, it’s time to double down and think like a fintech. More than 60% of Millennials and Gen Z said they would switch financial institutions for a better mobile app/digital experience, while only 22% of Boomers said they would do the same, according to BAI.

Going somewhere else is made even easier given that fintech and digital banks have an edge on mobile account openings. 37% of Gen Z and 29% of Millennials now say they prefer to open accounts via a mobile app, BAI found. 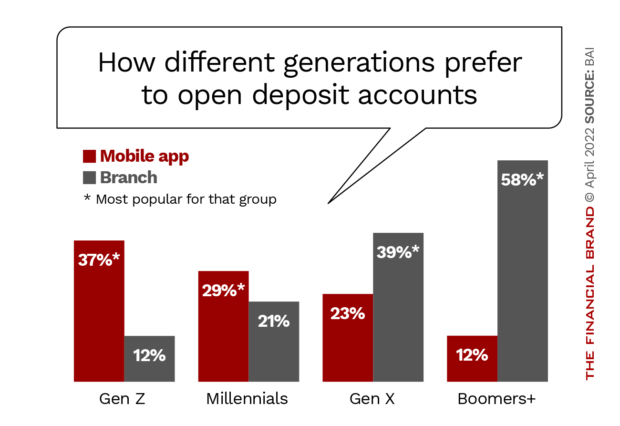 As banks and credit unions strive to attract new, younger customers and avoid losing the ones they have to fintechs, there is some good news. One of the most notable things is that younger consumers and Gen Z still rank banks and credit unions as the most trusted organizations to securely manage their financial data. And this is by a long shot, according to a survey by technology company MX. Consumers ages 15-24 most trust national banks (44%), credit unions (20%), and local or regional banks (15%). Only 7% trust tech companies, while 3% trust fintech. Clearly, however, trust alone isn’t enough, given the number of consumers using fintechs and tech company providers.

The most important thing banks can do now is offer more of those fintech capabilities younger consumers are seeking. Ironically — circling back to the idea of coexisting scenarios — as competitive pressures increase, many smaller institutions are now looking to third-party integrations and partnerships with fintechs to offer things they can’t provide under their own roof.

2. Be Up Front with Fees

Transparency and downward pressure on bank fees remains a common theme among consumers. 31% of Gen Z and 36% of Millennials said they would choose a new primary financial organization for the lowest fees. And as traditional banks struggle to keep pace with fintech challengers, fees are often a point of competition. 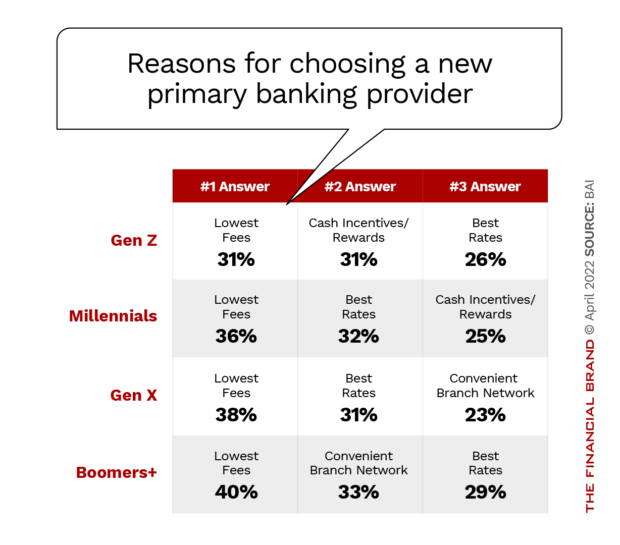 Feeling the pressure from the popularity of fintech programs such as Chime’s SpotMe overdraft service, beginning in 2021 several big banks started making moves to curtail overdraft fees and instead are offering new alternatives to help consumers bridge short-term cash flow issues. Among the leaders are Ally Bank, Regions Financial, Capital One, Frost Bank, PNC and Citibank.

One thing for banks and credit unions to consider is that consumer sentiment toward bank fees may be less about the actual fees and more about the transparency of the fees and how they are perceived. McGuffin Creative Group, for example, found that while consumers generally consider fees for late payments and overdrafts to be fair, they don’t consider it fair to have fees for ATM usage and mobile banking.

The McGuffin study noted “surprising nuance” in customers’ distaste for bank fees. “While numerous banks have for years focused their marketing efforts on promoting ‘free checking’ and ‘no fee’ accounts, our study found that respondents were more accepting of fees they could control,” the firm states.

3. Show Some Love for Crypto

As traditional banks and credit unions hesitate to enter the world of cryptocurrency, they are increasingly distancing themselves from younger generations. The BAI report found stark differences in how older and younger generations view cryptocurrency. While only 10% of Boomers say they have directly invested in cryptocurrencies or funds with crypto exposure, more than half of Gen Z and Millennials have done so. 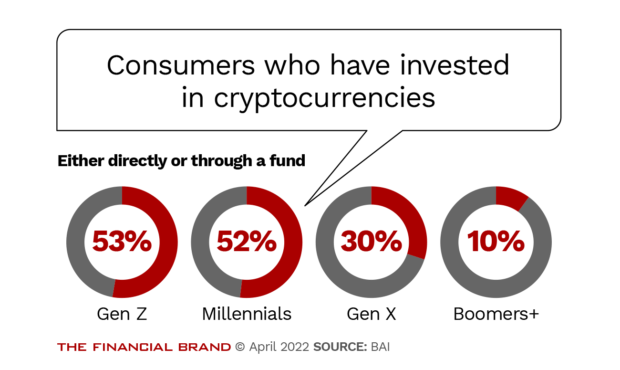 Adding urgency to the issue, PayPal already allows consumers to buy, sell and use crypto within its mobile wallet. In addition, the growing use of crypto cards is warning banks of a new payments disruption.

Surprisingly, despite the surging growth in cryptocurrency, three-quarters of the banking leaders surveyed by BAI say they have “no crypto plans,” while 15% said they “don’t know.” Only 7% said they plan to invest in cryptocurrency or offer crypto investment alternatives.

When their own banks don’t offer cryptocurrency services, younger consumers have no choice but to look to fintechs for what they need.

In the near future, banks that don’t at least have some capabilities, stake in, or acknowledgment of cryptocurrency will be seen as laggards.

Read More: Why Digital Banks Are Winning the War for Consumer Banking Relationships

Sustainability and diversity campaigns have often been given little more than lip service in bank marketing campaigns. Yet the growth in reports, rankings and talk on social media is making consumers much more aware of how banks perform.

Environmental, social, and governance (ESG) and diversity, equity, and inclusion (DEI) strategies are now more important than ever, especially among Gen Z and Millennials, who expect their financial institutions to be fully committed to these issues. While 18% or less of Boomers say they would switch financial institutions for a higher commitment to DEI or ESG, more than half of Millennials and Gen Z say they would do so, BAI found. Fintechs are often already ahead in this game with many of them founded on diverse and sustainable principles. 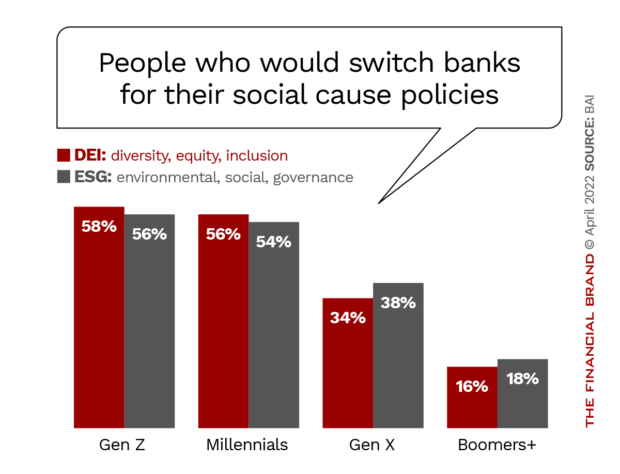 KPMG analysts go even further, saying banks that embrace the new trends and challenges can turn ESG into competitive advantages.