Subscribe Now Get The Financial Brand's FREE Email Newsletter
Apple's multiple forays into banking services haven't exactly been hidden, but only now is the tech giant's potential to become a retail financial services powerhouse coming into focus. What will it look like once all the pieces are in place? Read on to see what's coming to your customers' iPhones.

For some time now a race has been going on among major big tech companies that many traditional financial institutions have watched with intense interest and, often, trepidation.

The race’s destination? Dominance of payments and retail banking products and services.

At different points Amazon seemed to be in front, then Facebook (now Meta), then Google, and then Apple.

There is a growing sense, however, that Apple has clearly pulled in front of the field and that it could be on the verge of bringing all of its financial activities together in a highly attractive, powerful way that will seriously threaten traditional institutions.

Some experts have been predicting this situation for years. Back in 2016 venture capitalist Alessandro Hatami wrote on this site in “Could Apple Be Your Next Bank?” about what he saw then as a possible Apple banking ecosystem evolving.

Hatami suggested that in time “Apple Banking could easily become the world’s most formidable challenger bank.”

That day could be very near.

Over six years have elapsed since Hatami’s words were written and Apple’s expansion has grown exponentially, both on its own and in partnership with the likes of Goldman Sachs and Green Dot. Apple, being Apple, has kept its grand strategy chiefly to itself as it has undertaken each new financial services activity.

But things leak out. In fact, an entire Apple-leak ecosystem exists that the company seems to embrace. In earlier 2022, for example, elements of a secret Apple plan, parts of which are called “Breakout,” were leaked and initially reported by Bloomberg. This included elements of payment processing, risk assessment for lending, fraud analysis, credit checks, a subscription service for Apple hardware, and a buy now, pay later feature running out of its Apple Pay wallet. In June 2022, the other shoe dropped, in the form of Apple announcing the pending debut of its Apple Pay Later service, part of its iOS 16 software upgrade.

Tech blogger M.G. Siegler, General Partner at Google Ventures, underscored a major difference about Apple’s BNPL product. The tech company’s variation will be tightly integrated into Apple Pay and into the Apple Card offered in partnership with Goldman Sachs. However, Siegler pointed out that “Apple is taking on the risk (and doing the risk assessment) by doing the lending themselves. Off their own balance sheet.” An Apple subsidiary obtained lending licenses in most states to support the new program.

Siegler concluded: “That sounds like a bank because it is a bank. Apple is now a bank.” He quickly footnoted that with, “Yes, yes, not quite technically yet. Yet.”

U.K.-based futurist Benedict Evans, an independent analyst and former partner at Andreessen Horowitz, tweeted the following: “Request-for-blog-post from a fintech expert: what an Apple ‘bank account’ would look like and how the rails might work.”

Numerous Twitter users chimed in on this or that aspect of Apple’s status, but two knowledgeable bloggers took up the challenge and wrote extensive analyses of where Apple could be heading. Below we present highlights of blogs by Alex Johnson, creator of Fintech Takes, on Workweek.com — “An Apple Bank Account?” — and Itai Damti, Co-Founder and CEO of Unit, a provider of banking as a service platforms, who wrote, “Here’s What It Might Look Like If Apple Built Banking.”

Understanding What Apple Has Built

Apple has launched or announced seven key products and services, as enumerated by Johnson. This includes Apple Wallet, Apple Pay, Apple Card (offered with Goldman Sachs), and Apple Cash (offered with Green Dot). Joining this lineup are the newcomers, Apple Pay Later, Apple Pay Monthly Installments, and Apple Tap-to-Pay on iPhone, which turns the device into a POS terminal.

Writes Johnson: “The essential design of Apple’s financial services can be thought of as a container (Apple Wallet) that stores money (Apple Cash), credit (Apple Card, Apple Pay Later, Apple Pay Monthly Installments), and identity (government-issued IDs and other credentials) and wraps them with a transaction layer (Apple Pay) that can securely interact with a variety of other Apple components and third-party systems.” 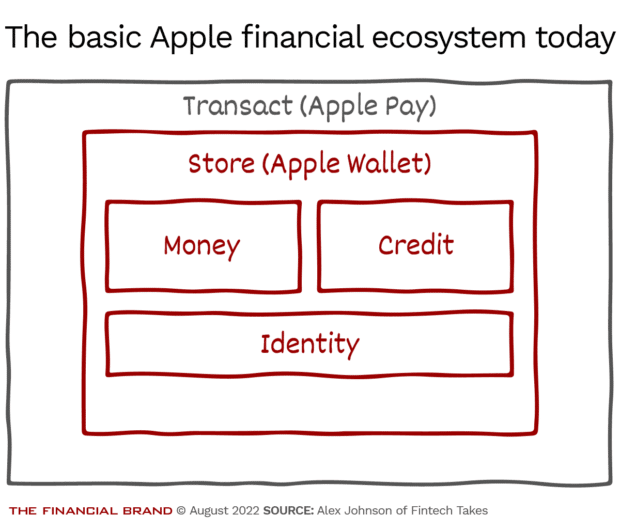 Apple’s components can interact with third-party products and services and can also connect with Apple-owned services. They also function in a sense as building blocks that can be assembled in different ways, both for Apple’s own purposes and potentially for third-party developers. Johnson points to the Apple Card’s access to Apple Cash accounts for payment of card customers’ daily cash rewards, which can be spent immediately.

Apple enjoys a double advantage as it moves forward into financial services. First, it has a huge user base among owners of Apple devices who want to do more with them. Second, it also controls the landscape the devices operate in through the software that runs them. 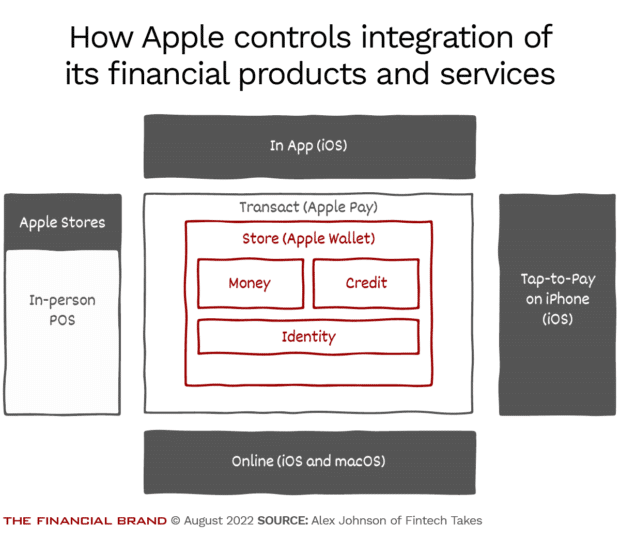 “This integration advantage extends everywhere you look — in mobile apps (obviously), online (through both iOS and macOS) and in the company’s new Tap-to-Pay on iPhone capability,” writes Johnson.

Even in the real world, Apple has the advantage of over 250 stores, in 44 states and Washington, D.C., that could easily handle banking functions.

All sorts of banking and financial services could be added to Apple stores, which use a footprint many banks have tried to imitate.

“Am I the only one who wants to see what an Apple-designed ATM would look like?” writes Johnson.

What Apple Could Build Versus What It Likely Will Build

In his blog Johnson sketches out a dozen new banking products Apple could add to its lineup. He intentionally avoids interesting but less likely products like an Apple Mortgage or a Apple-designed business banking account.

Among the dozen-plus “wish list” ideas are these six (all are included in the diagram below): 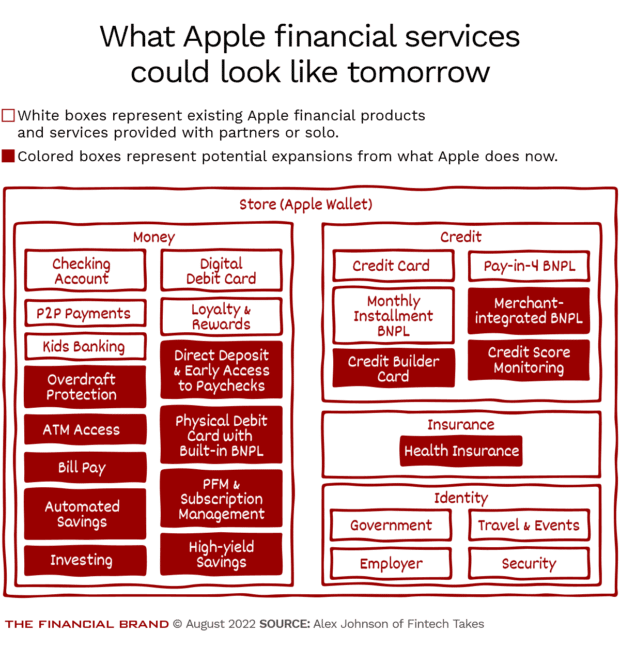 What will Apple actually do? Johnson reviews findings of research that indicates that Apple Pay is still fighting for a foothold in P2P payments and that growth has stalled for the Apple Card. However, he doesn’t see this as an impediment.

“P2P payments is a very competitive category, as is credit cards,” write Johnson. “And in-store mobile payments just hasn’t taken off in the U.S. yet. That’s not a failure you can hang on Apple. What these products have demonstrated is that Apple customers are open to the idea of using Apple financial services.”

Likewise, citing research by Cornerstone Advisors, he notes that Apple customers would also be attracted to a robust Apple bank account.

Two items not on the initial lineup, in Johnson’s view: overdraft protection and paycheck advance services — “that’s not Apple’s target market” — and no investments, which he says “feels like a bridge too far for Apple right now.”

“My bet is that Apple (eventually) goes with door number three — partnering with a smaller bank and capturing more of the financial upside,” states Johnson. “Doing the heavy lifting on the infrastructure side … wouldn’t be a problem given all of the infrastructure investments Apple is making as a part of Project Breakout and partnering with a smaller bank wouldn’t foreclose the option of acquiring that bank (and its charter) at some point down the road.”

Putting off a charter attempt right now makes sense. The Consumer Financial Protection Bureau, key players on Capitol Hill and others in Washington have problems with big techs. In addition, policy on mergers and competition are in flux.

A key development for any new player in banking is to offer an account with enough services to be their primary financial relationship, which Unit’s Itai Damti calls being someone’s “financial mission control.”

A core argument Damti makes is the role data about the customer will play in providing banking services.

“These days, it’s hard for a checking account to stand out,” he writes. “Nearly all offer the same core functionalities: the ability to hold a balance and send/receive funds.”

But Damti believes Apple’s transaction account can be a cut above. “More than most companies, Apple could decide to build just about anything,” he writes.

“Specifically, its value would lie in the software that surrounds it,” he explains. “Deeply understanding their users through data and building that knowledge into their product are two of Apple’s superpowers, and they will add up to a big advantage when it comes time for Apple to build out their banking suite.”

Utilizing data Apple already possesses on its customers will enable it to better serve them with banking and other financials services, according to Damti.

Given how much Apple knows about customers — personal schedules, what you are reading, your search history, what you email about and more — “Apple knows a lot about you.”

“Imagine how powerful that data could be when helping you make a budget, finance a car, choose an insurance provider, or cancel a forgotten magazine subscription,” Damti suggests. Knowing a consumer’s cash flow by running their banking accounts would enable them to offer additional financial products in the moment.

“By taking the time to deeply understand their customers, Apple could design banking products that delight them by anticipating their needs.”

Damti sees huge dual incentives for Apple to keep expanding its financial activities. On one hand, given its large user base, expanding offerings “could quickly add up to hundreds of millions of dollars.” On the other, adding banking to their product suite has the potential to supercharge Apple’s already sticky ecosystem.”

Making an acquisition or attempting to obtain a charter aren’t expected in the near future by Damti. He predicts that Apple will eventually partner with a group of banks, most likely all under Durbin Amendment limits so that they can charge maximum interchange fees to merchants.