Subscribe Now Get The Financial Brand's FREE Email Newsletter
Along with its unusual name, Marygold & Co. plans to bring an unusual mix of banking, payments and investment services to 'High Earner, Not Rich Yet' customers. Owned by a holding company with its own capital, it avoids the tyranny of life by pitchdeck.

A fintech mobile app that its founders plan to build into a “private banker in your pocket” for a pre-affluent market segment comes into the competitive fintech field at a challenging time. But it also comes with a rare advantage on the funding side.

Marygold & Co. — we’ll explain the unusual name further on — has been in development for several years and will be debuting in later 2022. The app is deeper and broader in concept than many other fintech apps, blending payments, savings, investments and artificial intelligence to serve “HENRYs.” The acronym stands for “High Earner, Not Rich Yet.” Such people earn between $250,000 and $500,000, according to Investopedia.

“Our goal is to try to organize our clients’ family financial lives,” said Nicholas Gerber, CEO at The Marygold Companies, the parent of the fintech, during an investor presentation. The parent is a holding company with an eclectic set of interests including a major baked goods and food company in New Zealand, a security specialist in Canada, a vegan health and beauty products company in California, and a New Zealand printing company. But that’s not all.

Also under its corporate umbrella is the keystone of the whole show: United States Commodity Funds LLC and USCF Advisers LLC.

These longstanding money management operations, started by Gerber, manage, operate or advise a selection of exchange traded funds. (Their motto is “Invest in What’s Real,” and the ETFs target commodities like oil, natural gas and gasoline.) The Marygold Companies was formed to spread the revenues of USCF and USCF Advisers across a diversified range of investments. The financial operation represents roughly 60% of the holding company’s $25 million in fiscal 2021 revenues.

Now the investment focus is coming full circle, giving the Marygold & Co. fintech its start without having to depend on proving itself to venture capitalists and other deep-pocketed investors for every nickel. 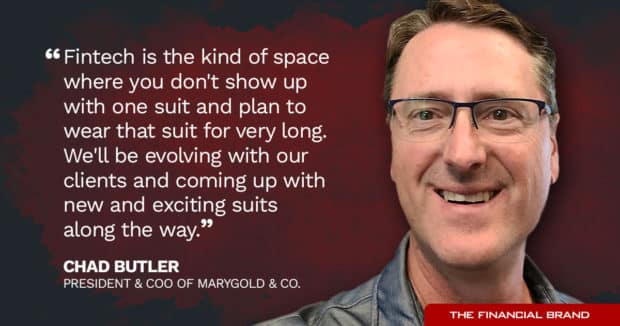 Chad Butler, President and COO at Marygold & Co, says in an interview with The Financial Brand that he finds considerable relief in building a fintech without spending most of your time courting investors. From earlier jobs in finance he recalls “being totally dependent on that pitchdeck in the next round of funding, which can sometimes be too big of a distraction to allow you to find a profitable path and engaged path with your clients.”

The company is combining banking as a service capabilities from Community Federal Savings Bank with goal-based investment “Money Pool” portfolios managed by Marygold Advisory Services, Inc. led by President Timothy Rooney. The app has been built from the ground up with an in-house company development team, led by CTO Dinesh Mishra.

“HENRYs” aren’t immune from running short near payday, from overdrawing accounts, or needing cash. But, by definition, they’ve got more money to work with.

“These are people who will be clients for Merrill Lynch, Morgan Stanley, Credit Suisse or UBS in ten years,” according to Gerber. “But if we can do what we want to do, which is to bring private banking to everybody through technology, then they’ll never be those firms’ clients.”

That’s no small ambition, pitting a fledgling app against those big names.

“We’re looking to introduce a marriage of high tech and high touch to our clients, which we think is missing out there,” says Chad Butler. “There are a lot of high-tech offerings that try to be all-in-one solutions that become difficult to navigate and hard to relate to your own financial journey.”

One feature will be the ability to reach a human, along with high-grade artificial intelligence, so Marygold users won’t get confused or miss out on the app’s features. There won’t necessarily be private bankers on 24-hour call, but the intent is for users to always be able to get genuine help with the app and the fintech’s services.

“Younger generations today are just as likely to trust their money with a fintech as an established 200-year-old bank.”

The plan is to bring the app out soon for both iOS and Android phones.

Read More: Which Neobanks Will Survive In the Future?

Designing for Younger People with Money (and Needs)

Beyond the basic services mentioned earlier, Marygold plans to provide services that have an extra twist to them that ordinary players typically haven’t offered.

“HENRYs are a demographic that is looking for help and for tools,” says Butler. The apps that already exist are a baseline for their expectations, but they would like something more than what’s been out there, he adds.

One example is called Money Pools. The basic idea isn’t brand new. Customers can set up savings goals that are tracked separately, with pools for accumulating towards those goals. Using the app’s features, these can be named, have a photo associated with them, and have goals and timing set. 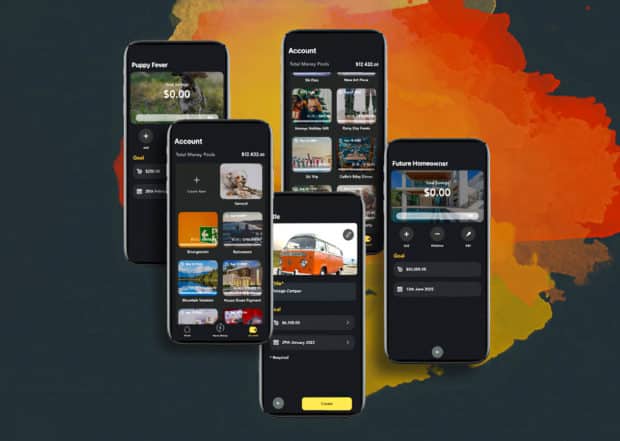 Others have done this, digitizing the classic money envelope system. But Marygold won’t leave it there.

Gerber’s idea is to tap both the fintech’s banking as a service relationship and the USCF ability to offer investments.

So, his thinking is that Money Pools targeting a year or less would be placed into FDIC insured deposits or Treasury securities. Goals with a horizon of a decade or more would be placed completely in equities. In between, Money Pools over a year but under ten would go into some mix of stocks and bonds.

The service is not meant for active traders. “We’re not thinking of someone looking for quick money buying Tesla or something else,” says Butler. “We’re looking for people who are establishing goals and looking for help to reach them.”

Payments Closer to the Leading Edge

As research has shown, tap to pay services are growing in popularity. Marygold’s app will feature tap to pay initially, but the goal is to tie the app in with wearables like smart watches as well as dedicated payment bracelets and fobs tied to Marygold.

“Maybe you’d rather use a silicone bracelet to the beach, so you can buy at the surf shop when you don’t want to carry your wallet or phone,” says Butler.

Much more significant is the “Pay Anyone” feature that Marygold will include.

“PayPal, Venmo and Zelle aren’t really P2P platforms, they are really app-to-app platforms,” Gerber told investors. “If you don’t have the app, you can’t get the money.” At the least, you need to have a checking account to receive a digital payment. 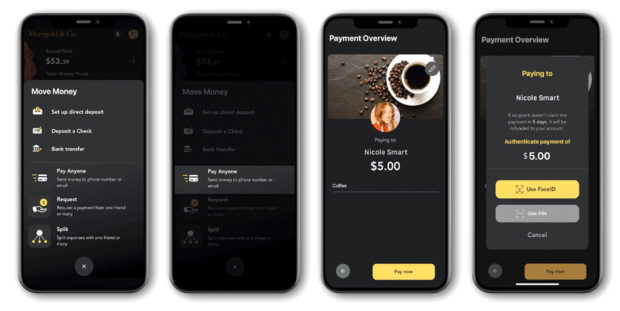 Gerber said the Pay Anyone service being developed will allow Marygold app users to, well, pay anyone. People who receive a payment will receive a text or email notice, and if they download the app and join Marygold, they will receive a $10 bonus. Otherwise payments will be sent via such channels as the ACH. And if someone doesn’t have a checking account, Gerber said that Marygold will mail a paper check.

“It’s old fashioned, but we will still do it,” he says.

Down the road, but relatively early, Marygold’s leaders plan to roll out AI that will be able to answer many questions beyond simple things, says Butler.

“Imagine being able to ask the app, ‘How much did I spend eating out last year?’ or ‘What are the tax implications of withdrawing $10,000 from my investment portfolio?’ — and being able to get an immediate response,” says Butler. “That is the kind of questions that normally are reserved for human private bankers.”

Read More: Can Banks Beat Neobanks at Their Own Game?

So, What About that Name?

Butler says that there’s a lot more in the wings as Marygold evolves.

“Fintech is the kind of space where you don’t show up with one suit and plan to wear that suit for very long,” says Butler. “We’ll be evolving with our clients and coming up with new and exciting suits along the way.”

That’s all in the future. Marygold’s name comes from the past.

Now “marigold,” the flower was originally spelled the way the fintech does. The origins are religious, referencing the Virgin Mary of the Christian faiths. In the Middle Ages pilgrims and other worshippers would gather marigolds and place them at the feet of statues of Mary.

“They were called ‘Mary’s Gold’,” says Butler. “Nicholas Gerber thought marigolds were an excellent symbol for planting financial seeds and growing gardens of gold for our clients.”