Subscribe Now Get The Financial Brand's FREE Email Newsletter
Many Americans say they couldn't last a day without their smartphone. They confess to constant connectivity, admitting they are perpetually plugged-in — even in the bedroom. What's this mean for the financial industry? More and more consumers are turning to their mobile devices for their everyday banking needs.

Bank of America knows what you’re doing in bed, and what you’re sleeping with. A survey fielded by BofA found that smartphones are so addictive that nearly three-quarters (71%) of Americans are sleeping with their mobile device in- or next to their bed. One third of younger Millennials (ages 18-24) say they sleep with their smartphone actually on the bed or in their hand.

These findings are part of the second annual Bank of America Trends in Consumer Mobility Report, a study examining how mobile trends and banking behaviors are radically reshaping consumer behavior.

The study demonstrates the massive impact mobile devices now have on our daily lives. For many, smartphones are the first and last thing they interact with every day. Nearly one-quarter (23%) of all Americans admit they have fallen asleep with their smartphone in their hand — nearly double that many (44%) for younger Millennials. More than one-third (35%) of respondents say they reach for their mobile device first thing every morning. 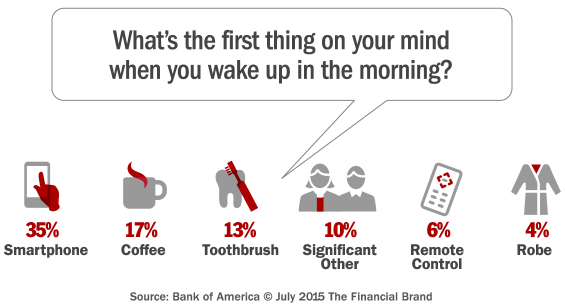 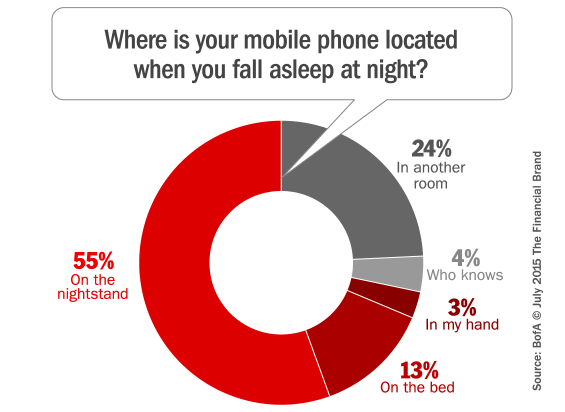 Nearly four in 10 U.S. adult consumers never disconnect from their smartphones, and a paltry 7% shut down entirely on vacation. The majority (82%) of adults would consider turning back for their smartphone if they left it at home. 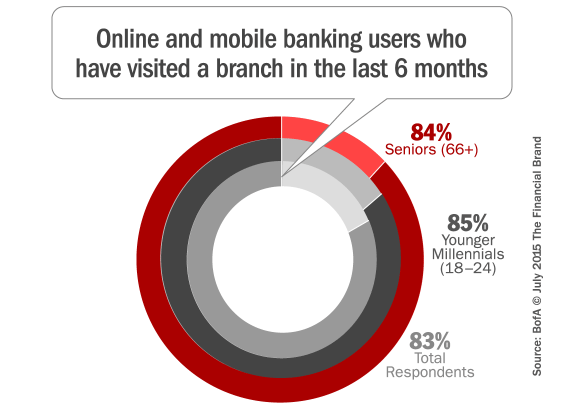 Nearly four in 10 (38%) use their mobile banking app to pay bills; about one-third (32%) use the app to locate a branch or ATM; and 15% manage investments via the app.

More than six in 10 (63%) are using mobile check deposit. Adoption of this feature is highest among older Millennials ages 25–34, with 72% saying they use this feature. At the same time, the survey showed a notable increase in those ages 50 and older: this year, 52% of that group use mobile deposits vs. 37% last year — that’s a big one-year jump.

Four out of five consumers have opted to receive mobile banking app notifications and alerts, with low balance (43%), deposit made (41%) and unusual activity (41%) representing the most popular alerts. 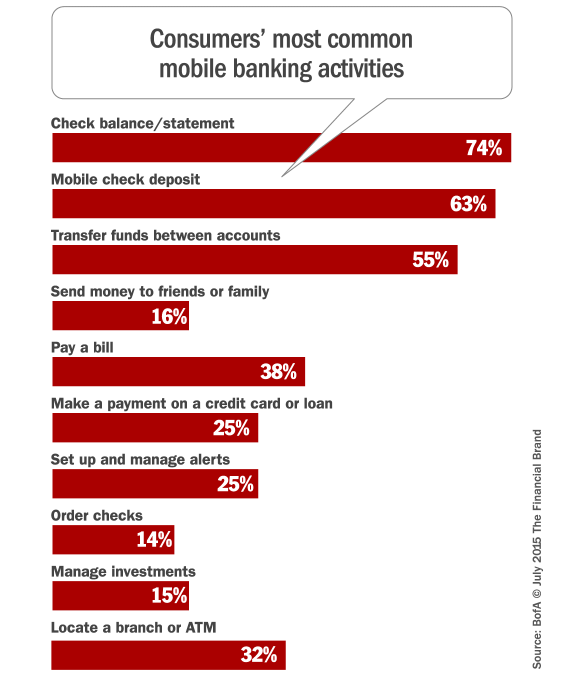 Mobile payments also saw significant growth in the last 12 months. According to BofA’s report, more than half (56%) would consider paying someone using P2P payments via their mobile banking app. One third would consider or have already used their smartphone to make a purchase at checkout.

Along with the sharp spike in smartphone usage comes a growing focus on mobile manners. Three quarters of respondents say they have “mobile boundaries,” believing that some places are “not appropriate” for mobile phone use. When asked about the most annoying place people use their smartphones, consumers cited movie theaters (31%), followed by religious institutions (18%) and restaurants (13%).

But Americans also confessed to their own bad mobile behaviors: 37% send text messages during meals, 32% check their phone during conversations, 27% will take calls while riding public transportation.

Other notable highlights from the BofA mobility report include:

Spying on Spending. Men are more likely than women to track the finances of their significant other (11% vs. 7%).

Mobile Blunders. When asked about the most embarrassing thing that has happened involving their mobile device, nearly one-third (30%) of respondents were most embarrassed by loud ringtones going off in quiet places. Other top responses included accidentally calling someone (19%) and sending a personal message/photo to the wrong person (16%).

Hashtag #Dumped. Younger Millennials were most likely to cite being dumped by their boyfriend or girlfriend via text, which has happened to at least 1 in 20 of them.

Age Appropriate. Nearly half (46%) of respondents feel the most appropriate time for parents to buy their child a smartphone is ages 13–15.