Subscribe Now Get The Financial Brand's FREE Email Newsletter
The majority of shopping and buying is moving from physical to digital channels across industries. The impact on the banking industry can be found in the new definition of banking convenience, and in the increased preference for digital account opening capabilities. The question is ... how will banks respond.

Today, the vast majority of shopping for financial services (or virtually any consumer product) is done using the keyboard on a computer or mobile device. As consumers in all age categories become more comfortable with digital technology, the shopping experience may even include voice commands. The question is – are financial institutions prepared for this shift in shopping and buying behavior?

The 2017 Omni-Channel Shopper Study, published by Novantas, found three major shifts in consumer behavior that will impact bank distribution and sales strategies in the future.

A Shift in Dependence on Branches

According to the Novantas study, “The majority of U.S. shoppers are now in segments that either don’t use bank branches, don’t care much for branches … or both.” This seismic shift in preference will have profound implications for the way banks and credit unions acquire and service customers in the future.

”The majority of U.S. shoppers are now in segments that either don’t use bank branches, don’t care much for branches… or both.”

Bottom line, as transactions start to shift away from bank branches, the emotional attachment will follow. And as the emotion around branch banking changes, so will the criteria for selecting a financial institution. In fact, Novantas found that the correlation between a dense branch network and the propensity to acquire a higher share of deposits has weakened significantly. Of special note, the correlation weakened the most for older age segments and higher income segments.

The implication for financial institutions is that winning deposit and customer share will no longer be determined as much by number and location of branches, but by the ability to resonate with a prospect on a personalized level. Those organizations that can target micro-segments more effectively and create positive digital experiences will be more likely to win new business.

A New Definition of Convenience

The traditional definition of convenience in banking has revolved around the proximity of the branch. With the growth in digital technology and the increased acceptance of online and mobile banking, access to banking products and transactions is no longer tethered to a physical location, resulting in a redefinition of convenience. Today, while convenience is still the primary driver of initial consideration, the importance of branches in that definition has gone down. 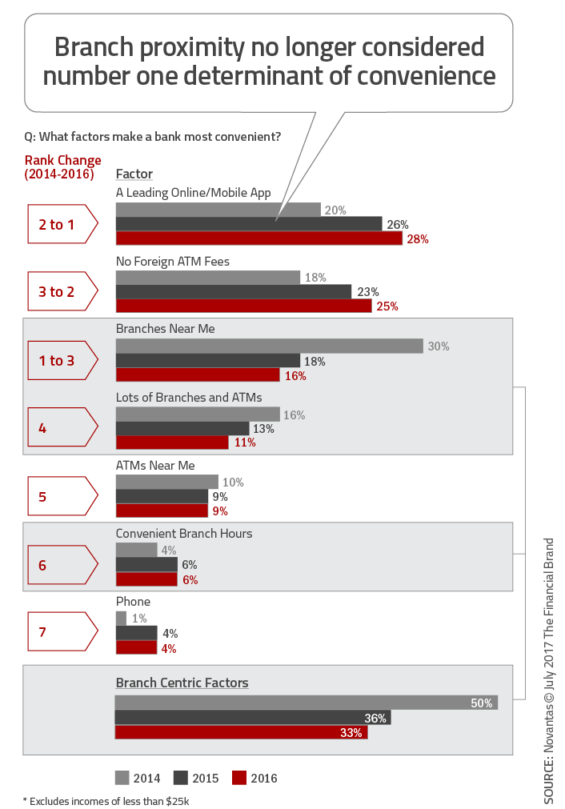 This ongoing shift in the definition of ‘perceived convenience’ benefits the larger financial institutions that have invested the most in digital capabilities. According to Novantas, “Banks lagging in digital innovation and product development risk losing out to those banks on the leading edge, but also to fintech providers positioning themselves as technology-first bank alternatives.”

Another significant trend of note is the increasing importance of being able to access cash without a fee, irrespective of primary bank proximity. The surge in importance of ‘no foreign ATM fees’ illustrates the desire for physical access to funds without penalty, which increases in importance as branches close.

The 2017 shopper study found that the average consumer only considers two banks when shopping for a new checking account. Without an awareness of digital leadership, a bank or credit union could be removed from the consumer’s decision set much earlier than in the past.

The impact of an Amazon shopping experience has impacted the way consumers want to purchase financial products as well. The digital consumer has less patience for being ‘forced’ into a physical branch to open a new account and is comfortable with managing more of their life on a digital device. As illustrated in the 2017 Account Opening and Onboarding Benchmarking Study, industry leaders are providing customers the ability to open accounts starting and ending on online or mobile devices.

The Novantas shopping survey found that 79% of consumers are doing at least some of their shopping for new checking accounts digitally, with 54% using only digital channels. These digital-only shoppers are both older and wealthier, with the size of the digital-only shopper category increasing in size. 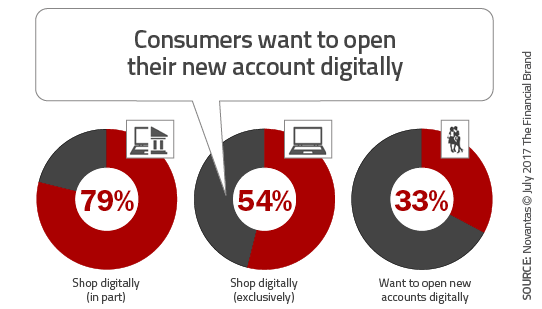 Aligned with the preference to shop digitally, there has been a corresponding increase in the preference to open accounts digitally, according to Novantas. Over a third of consumers prefer to open their account digitally, with the number being significantly higher (46%) if the consumer shopped using digital channels exclusively. 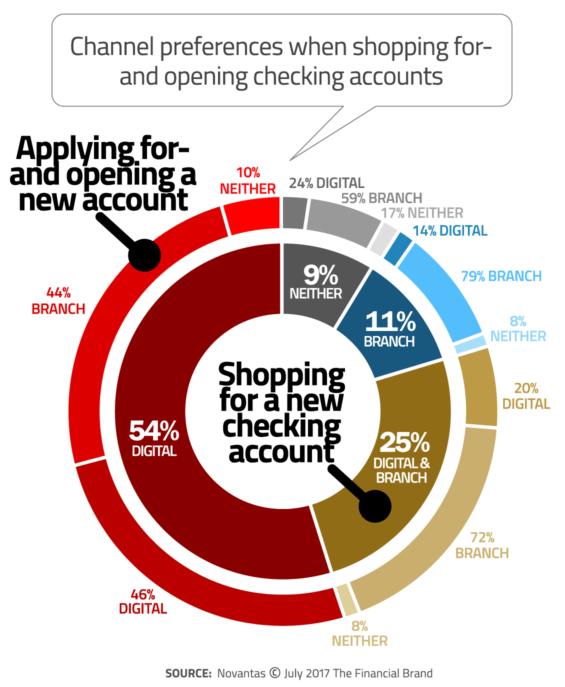 Unfortunately, many consumers continue to be forced to use channels they do not prefer. According to Novantas, “Fewer than 9% of consumers are actually successful in applying for, and opening, their accounts entirely online. This indicates a significant pent up demand; if banks fail to address this gap, it’s almost certain an enterprising fintech firm will.”

The banking industry needs to realize that, while the consumer has been patient in the past, the tolerance for substandard offerings and service will not go unpunished. In fact, when Novantas performed a study on attrition,  a poor digital experience ranked below overall bad service or high fees but higher than the impact of a closed branch.  In other words, digital service trumps branch proximity as a retention tool. 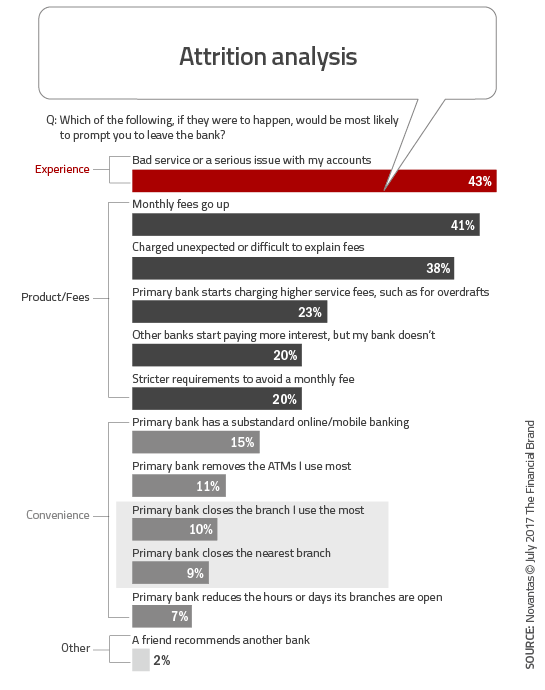 A Call to Action

The industry is deluged with research on the importance of branches. Study after study proclaims that consumers want branch access and they don’t want their favorite branch closed. While there are indications that physical locations still are needed, the importance of banking branches in relation to digital capabilities has seen a continuous decline.

The importance of investing in digital capabilities has never been greater. With consumers only considering two banking organizations in their shopping process, and doing their shopping on digital channels, coming in third is not a viable long-term strategy. To be considered, a bank or credit union must not only have a strong digital banking offering, but promote this offering as well.

The same applies for digital account opening capabilities. “Digital account opening is the norm in other complex categories such as P&C insurance, investments, and even health insurance — there is no reason why banks cannot also crack the code,” stated Novantas. “As digital acquisition rates increase industry-wide, banks who fail to enable a digital opening process risk losing their fair share of acquisitions and ultimately will face a shrinking portfolio.”