Subscribe Now Get The Financial Brand's FREE Email Newsletter
Initial moves to the cloud were driven by pure economics, but banks and credit unions now are much more willing to invest in cloud-based technology as a means to generate revenue and keep up with digital-first competitors. New data identifies key applications bankers are prioritizing.

Why are bankers increasingly keen to move their operations to the cloud? It’s all about the dollars and cents. But it’s not all about saving money; increasingly it’s about making money.

Within two years, two out of five financial services firms will have an advanced — or fully optimized — cloud data center, according to a survey by Capco. That prediction includes banks, capital market firms and insurance companies worldwide, but understates the progress being made in the U.S. market, which is more advanced in adopting cloud computing, according to the consulting firm.

Financial institutions currently run about a third of their applications through the cloud, a Capco survey found. That will jump to just over half in two years.

“Sure, there are costs to be saved in the cloud, but the savings are not always that compelling,” says Peter Kennedy, Partner and Cloud Lead at Capco. “The cloud is about enabling growth.”

“Cloud computing is the delivery of on-demand computing services — from applications to storage and processing power — typically over the internet and on a pay-as-you-go basis,” according to technology website ZDNet. That definition is largely synonymous with the term “public cloud.” A “hybrid cloud,” on the other hand, involves having some data in the public cloud, some projects in the private cloud (behind a corporate firewall) and use of multiple cloud vendors.

Why Cloud Adoption is Ramping Up Now

In 2020, bankers were already investing pretty heavily in the cloud, even migrating some core processes to the cloud and developing cloud-native apps. But thanks to the pandemic, bankers are accelerating their cloud journeys. They’ve redrawn their technology roadmaps and are pouring additional monies into cloud initiatives with the end goal of achieving full digital implementation in the cloud. As the report states, the industry “is knee-deep in it transition to digital.”

According to the Capco survey, almost half of bankers say that Covid encouraged them to open up their wallets for cloud projects. In 2021, financial institutions spent $36 million on cloud projects. Most expect that their cloud spending will increase between 1% and 10% in the next year or two. 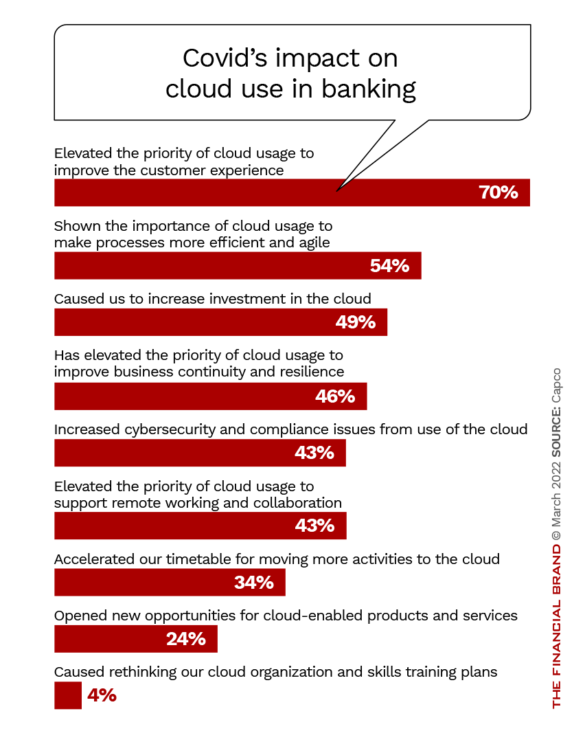 As noted, the pandemic accelerated cloud spending, and the good news is that it looks like that spending will pay off. The majority of financial institutions report revenue increases between 1% and 5%, according to Capco. An impressive 20% say that their revenue boost three years after cloud implementation is 6% or more.

It’s likely that those institutions at the pointy end of the revenue boost have moved beyond running existing processes remotely and have rearchitected processes and are using the cloud’s data analytics capabilities to unlock real value, notes Kennedy.

With a cloud infrastructure, financial institutions can tackle the core process modernization that has been on the back burner for years (or decades).

Still, there’s a lot more revenue left to grab. Only half have used the cloud so far to penetrate new client segments and only 38% are using the cloud to improve customer retention and upsell products and services. 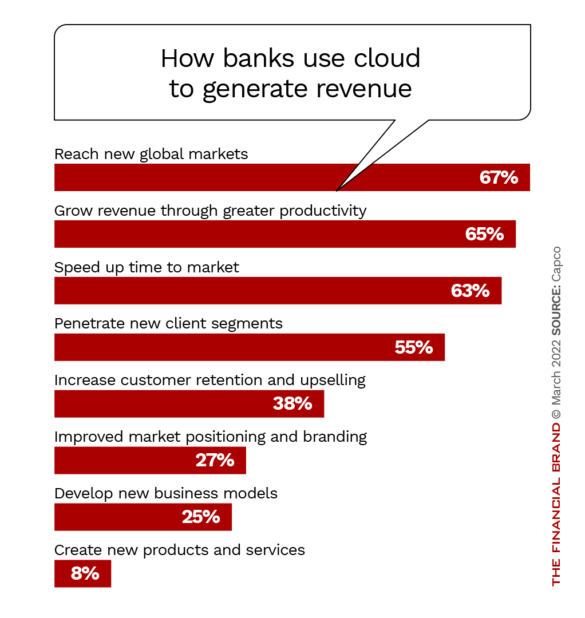 Progress Made, But More to Do

Today, banks run an average of 38% of their business applications through the cloud, and they anticipate that percentage will increase to 55% in two years, the study notes.

But the applications they focused on in the past — data and customer analytics, IT management and operations, and customer management and experience — are not where they will be focusing for the next two years. According to the research, financial institutions expect to make their most significant investments in product development and R&D (62%), cybersecurity (48%), business development and sales (42%), and procurement and vendor/fintech management (44%).

Capco believes that although financial institutions — often pushed by the pandemic — have made progress on their journey to the cloud, most are still three to five years from achieving their future vision of a fully digital cloud platform.

For example, it will be a few years until banks and credit unions routinely use artificial intelligence and machine learning to provide consumers with proactive services that fit their in-the-moment lifestyle needs.

Like any large-scale transformation, the move to a fully digitized cloud platform is not without challenges. For banks and credit unions, the top three obstacles to cloud implementation are difficulty in choosing the best technology options (48%), uncertain ROI and use cases (45%), and the lack of an enterprise-wide strategy and roadmap (42%).

Without a roadmap, what often happens is that the cloud is deployed to solve a specific business-unit problem such as automating a back-office process. Cloud initiatives become buried in departmental silos as a result.

But then again, roadmaps aren’t’ the end-all-be-all. In fact, Peter Kennedy believes that financial institutions can achieve large scale transformation without an enterprise-wide roadmap. Instead, focus on creating the conditions and incentives for success and allowing transformation to happen through iteration and experimentation, says Kennedy.

Even if financial institutions put together an enterprise-wide strategy, the talent shortage can put any implementations in jeopardy. “An average of 25% of financial services institutions said limited access to cloud skills and talent along with a need for training were serious impediments to successful cloud implementations,” says Kennedy. Banks and credit unions need to pay additional attention to training, recruitment, and talent retention if they hope to realize benefits from their cloud investments.

Overall, the survey found financial institutions are bullish on the cloud. Many have high hopes for their cloud implementations within the next two years, including increased revenue (66%),
greater market share and an expanded customer base (62%), and cost reductions (48%).

And while many financial institutions rely on public and private clouds, expect a multi-cloud strategy to take hold as banks and credit unions move toward a hybrid cloud environment. A hybrid arrangement is more than a stop-gap until financial institutions get comfortable with the public cloud: hybrid is here to stay.

“There are lots of reasons to keep some processing in your data center or a dedicated facility,” argues Kennedy.

According to Capco, seven principles can assist financial institutions to squeeze the full benefit from moving to a digital cloud infrastructure: