Subscribe Now Get The Financial Brand's FREE Email Newsletter
No one will be talking about 'core systems' in a few years. They will be unbundled. Community and regional financial institutions will rely instead on 'cloud-native ecosystems.' This will equal what any fintech has and far exceed the megabanks patchwork quilt systems. For many it could be the key to surviving in a very different banking world.

It’s not often that a highly successful company is willing to fundamentally alter a business model that has worked for decades. That is exactly what Jack Henry & Associates is doing.

This aggressive move is particularly remarkable considering that Jack Henry, together with FIS and Fiserv — the other two members of the Big Three bank technology companies — provides the processing power for most of the U.S. banking industry and a large portion of credit unions. And all three companies are very profitable, to boot.

Jack Henry isn’t walking away from its traditional business overnight. In fact CEO David Foss takes great pains to reassure existing community and regional financial institutions — the bulk of its clientele — that it will continue to not only support, but invest in its existing core systems.

The company’s calculated gamble is as much about the future of its banking clients as it is about its own. Some critics (or competitors) may paint the move unfavorably, and often there can be grains of truth in such criticisms, yet what Jack Henry is doing is a confirmation of the massive forces changing the banking industry.

The tech company is making its own long-term strategy public as a way to reassure clients, but also, though not in so many words, to warn them about the need to change and adapt.

Converting the Whole Deal to a Wide Open Platform

The new strategy, initially detailed by Foss during an early February earnings call, involves unbundling the company’s core systems and, over time, rewriting all the core components as discrete, cloud-native services.

“The whole idea here is that banks and credit unions can pick and choose what they need to serve their customers best,” Foss tells The Financial Brand in a subsequent interview. “People can replace traditional core functions one piece at a time if they want to, or they can wait until we have all of them out there and do it at one time.” The strategy will unfold over several years.

An essential part of the plan, however, is that the new open platform will be able to accommodate almost any fintech application an institution wants to use. The company already provides connectivity to about 850 fintechs so the framework is already operating. All the applications — no matter where they originate — will have the same look and feel, the same security components, the same connectivity, Foss states. 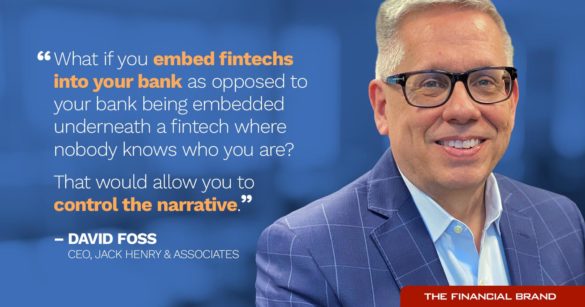 Implementing the new strategy will take several years, but it has been underway for two years already. It is essentially an expansion of the company’s Banno digital banking platform. Five institutions are currently in beta with the first core component to be released, wire processing. New-account opening will follow shortly, according to Foss. He also notes that you don’t have to be a Jack Henry customer to use the components. Everything is being rewritten as open APIs and will work with other companies’ systems.

Reasons for the Strategic Change

Disruption is driving all of the above. Arguably the bank technology companies are being disrupted as much by what’s been happening in the industry as their clients.

The rap on the Big Three bank technology providers for years has been that because they are so dominant and profitable, they have little incentive to change. They come in for a lot of criticism for being slow to incorporate innovations, poor integration, lack of responsiveness, etc. All three companies have made meaningful shifts in recent years but Jack Henry’s roadmap for basically ditching legacy technology is a clear indication that the world has changed.

In his remarks to analysts, Foss said that community and regional financial institutions are at a crossroads. “The personal service and experience they are known for is being disrupted by technology as non-traditional financial service providers have entered the market. The way people bank has fundamentally changed, especially for the younger generation.”

The company’s shift in direction is designed to “make it easier for the bank or credit union to think differently about how they bundle their services,” says Foss, “as opposed to them buying what we want them to buy.”

During his interview with The Financial Brand Foss addressed banks’ readiness and willingness to embrace the opportunities that modern technology enables, including strategy, skills, and security concerns. He covers these in the dialog below, edited for clarity.

Are many institutions clamoring for an unbundled set of applications versus having a traditional core system?
Foss: There is a sliver of our customers today who are trying to figure out how to redefine what they offer as services. We believe that group is only going to grow over time, however. And so we want to be positioned to serve those institutions who want to think about their future differently.

That’s also why we’ll continue to offer, and invest in, our core solutions for institutions that want to continue to buy technology as they have always known it.

What changes will banks and credit unions need to make to take advantage of new technology options?
Foss: The key is to think about strategy first, not technology. For example: What does the customer look like that we’re trying to attract? The days of thinking in terms of geography — “we serve customers in three counties” — are gone. Institutions need to think about how to attract new customers, and create new customer niches by using technology.

One example of this is Wisconsin’s Incredible Bank. They realized they had the expertise to serve people nationally who buy high-end RVs. It began as a side business but eventually they built the whole bank brand around that. We see lots of those types of opportunities for financial institutions to create a new market for themselves.

Financial institutions don't need to add technologists to their staff as long as they pick fintech partners who understand API-enabled solutions.

Is Banking as a Service a good niche for many institutions?
Foss: Many think it sounds like a great growth opportunity — and it has been, for some institutions. You can make money by embedding yourself underneath a fintech. The challenge is, the consumer is a customer of that fintech. They don’t recognize themselves as a customer of your bank.

What if you embed fintechs into your bank as opposed to your bank being embedded underneath a fintech where nobody knows who you are? You can do that by offering connectivity to fintechs through your institution so that the consumer gets access to them, but the relationship to the consumer is with your institution, not with the fintech. That allows you to control the narrative. Consumers will think of your bank brand first as opposed to the fintech’s.

You talk about ‘cloud-native’ technology. How is that different from being ‘hosted in the cloud’?
Foss: It’s an important distinction. There are technology companies that are doing what’s called a “lift and shift.” They’re taking old technology and hosting it in the public cloud [Amazon Web Services, Microsoft Azure, etc.]. But it’s not really a cloud solution because it’s not cloud-native.

A cloud-native solution is something written from scratch with tools and technology that are designed to optimize the cloud. Also, such systems do not require using a legacy database — DB2 or Oracle or something like that.

But are most banks and credit unions ready for using the public cloud for key systems?
Foss: I’ve talked with many CEOs and they’re not ready to do everything in the public cloud yet, but they know it’s coming. One of the indicators is that the regulators are talking about it.

We think there’s going to be a cloud tipping point relatively soon. We want to be ready because it involves essentially rewriting everything from the ground up. And that takes years.

Will the change in bank technology you’re describing put community institutions and regionals on an equal footing with the megabanks?
Foss: It will put them ahead of the megabanks because most of them are running really, really old technology. They’ve put a nice covering over the top — like a digital experience. But for the top ten banks the underlying technology is old. There’s a still lot of COBOL in those systems.

The only big bank I know of in the U.S. that’s making a move [to modern technology] is Chase with their announcement of implementing the Thought Machine platform. But it’s going to take them five or ten years.

What about equal footing with neobanks like Chime or big fintechs like PayPal?
Foss: Modern technology definitely puts banks and credit unions on equal footing. But the question is how the institution decides to use the technology. What attracts people to Chime, for example, is the front-end user experience, which is pretty cool and is really easy to use. That’s something Gen Zers relate to. And oh, by the way, it’s free.

Can modern technology let bankers provide that user experience? Absolutely. But the institution has to want to do that. They’ve got to have a strategy to commit to delivering those types of services, particularly the types of free, digitally-enabled services that Gen Z and Millennials want.