Subscribe Now Get The Financial Brand's FREE Email Newsletter
Pouring on more emails and text messages leads people to simply disregard what banks send — or even opt out of such communication overall. Better coordination is part of the solution, but so is personalization of the messaging.

Bank marketing success too often is measured by customer acquisition and the onboarding engagement that immediately follows. But if engagement with existing customers is nil, the result ultimately becomes like filling the bathtub while leaving the drain open.

Peter Wannemacher, Principal Analyst, said this can occur to the point where things get backwards.

“In banking, the job is sometimes less about driving engagement and more about fighting disengagement,” he explained during a webinar.

As digital channels become a greater part of the business, relying on people coming into a branch is a poor choice for building engagement with existing customers. Paradoxically, banks and credit unions have more remote channels for communicating with existing customers than ever, including email and texting. Many waste the access.

Permanently Out of Reach:

Many people are disengaging from their traditional financial providers. They aren't necessarily leaving, but they are opting out of marketing communications and other messages.

Forrester’s research on digital marketing, conducted for Relay Network, found that 73% of the executives surveyed say existing customers and members are opting out of communication with their institutions. Beyond that, 66% of the sample indicate that more people are “passively disengaging” — that is, they are not opening or reading messages.

Based on what he’s seen, Wannemacher said “this is a problem that’s getting worse.” There was broad agreement in the study that re-engagement is tougher than fresh engagement.

“But many leaders at banks and credit unions are figuring out that while it’s harder, they have to do it,” said Wannemacher. “It has a big impact.”

Why People are Disconnecting from Their Financial Providers

Sheer volume of messages, both overall and from each provider, lies behind some of the problem. Wannemacher said that people find much of what they receive from their financial providers to be irrelevant marketing messages. These include such examples as promoting credit cards or other accounts that they already have or trying to sell people on products and services that don’t fit their circumstances. The classic example: sending emails marketing home equity credit to someone who rents an apartment.

Wannemacher says there’s no one reason to why institutions persist in behaviors that lead to an inundation of useless communication. Respondents gave multiple reasons, summarized in the chart below. 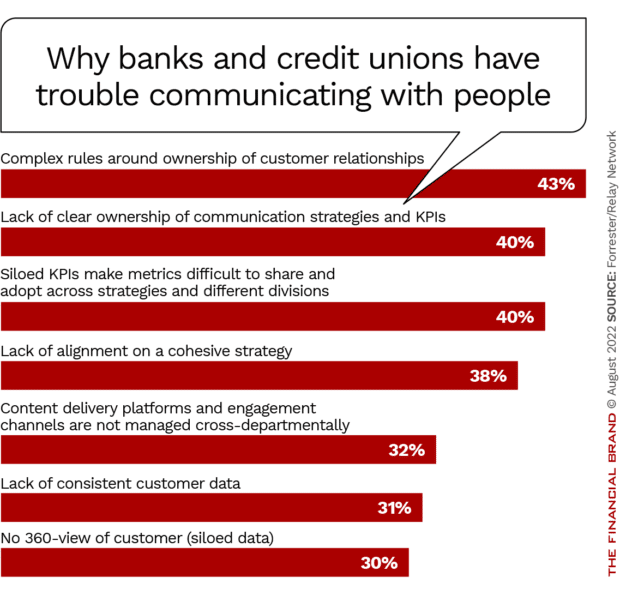 The leading one arises because it’s not clear in many institutions who “owns” the consumer, which often turns things into a corporate free-for-all that leads to confusing messaging. However, Wannemacher indicated that the causes being relatively close in size comes about because in many banks and credit unions the marketing challenges have become very complex.

A key problem is that institutions begin thinking and messaging from the viewpoint of moving product, rather than serving people’s needs.

“It’s an inside-out perspective,” said Wannemacher. While people see themselves as customers or members of one organization, in practice multiple internal “companies” may be vying for different pieces of their financial business.

The answer lies in personalization, a concept many pay lip service to and which often doesn’t get executed.

That can’t happen if everyone in the institution is reading out of their own book. In a sense this can be literal, with different divisions using their own marketing technology and applying it differently, he said.

Turning things around “requires internal collaboration,” said Wannemacher. “It might be invisible to the end user — in fact it should be — but it’s required to do your job effectively.”

A Prescription for Creating Greater Personalization in Bank Marketing

Much is made, especially in the current economy, of “financial health.” A recent blog by one of Wannemacher’s colleagues, Natalie Schibell, VP and Research Director, made observations about personal medical-care portals that suggest some ideas banks could readily adopt to help consumers with financial health issues.

Medical portals provide an online place where people can make doctor and procedure appointments, read the results of tests and examinations from multiple practitioners, send and receive messages from their providers and even handle payments. Outbound email alerting people to new messages or results is one feature. (And no one ever gets a promotion like “Have you tried our group’s colonoscopies?”)

Schibell suggested in her blog that a helpful function to add to such portals would be to provide what she calls “precision nudging.”

Many banks and credit unions provide timely texts about card usage, to prevent overdrafts and other warnings. But perhaps these services could go further, even providing messages promoting products and service that a consumer isn’t using. The difference would be messages that are more in the moment. To a degree some bank and fintech apps do some of this.

When people opt out or don’t open financial institution messages, they are essentially saying that they regard all that as useless junk mail or spam.

The solution begins with better use of the data that institutions have in order to discern what individual consumers need assistance with, both in general and at various points in their financial cycle.

The result of this would be to move away from traditional channels like text or email towards feeds that operate more like the messaging that occurs internally and externally from social media platforms like LinkedIn. The latter’s algorithms serve up items of interest based on past viewing, as well as more specific messages.

A curated stream of messages would cut through the flood of messages that clog the average American’s smartphone.

“There’s a reason we don’t like to hear ‘You’ve got mail!’ anymore,” said Wannemacher. “We get too many emails and other messages.”

The other benefit to a personalized stream: “Banks and credit unions would demonstrate why they’re more valuable to people beyond just very basic stuff. If you just hold their money, that’s a ‘commodity prop,’ not a ‘value prop’.”