Subscribe Now Get The Financial Brand's FREE Email Newsletter
Fighting megabanks in major markets where it gets outspent 10-to-1, the cheeky regional bank makes the most of its marketing budget with a new brand campaign that's both fresh and funny.

A new branding campaign, the first from TD Bank in more than five years, is designed to shatter the perception that banking has to be stuffy and stand-offish. Using the tagline “Unexpectedly Human,” the new campaign campaign relies heavily on humor to convey its main theme, emphasizing a focus on modern convenience and customer centricity.

TD Bank steadfastly believes that banking is not about transactions, but human interactions. Even as it continues to roll out new digital banking solutions, this theme remains central in its competitive positioning.

“Don’t be alarmed if we smile,” the bank says on a microsite it created to support the new campaign. “We’re the bank that defies expectations. You can feel it the moment you walk in, call us or open our app. We’re locals helping locals and an all-dogs-are-welcome kinda bank. We run on human hours, not the typical 9 to 5. Midday or midnight, you’ll get a real person when you call us. And the most unexpected part? We actually have fun doing it all.”

The campaign builds off earlier campaigns TD Bank has run. For years now, TD Bank has been billing itself as “America’s Most Convenient Bank,” a tagline coined by Commerce Bancorp, which TD Bank Group acquired in 2008. Ever since, the East Coast regional institution has touted its vast branch and ATM network, longer branch hours — including weekends — and other ways it makes life easier for consumers, like encouraging people to bring in their dogs.

The ads in the new “Unexpectedly Human” campaign continue to celebrate the ways in which TD simplifies banking.

“It’s only human to want more from your bank,” TD says on its campaign microsite. “So we give you more ways to make life and banking easier.”

For instance, TD Bank issues new and replacement debit cards instantly at any location, even on weekends. They also have a bill pay feature on the TD Bank app that keeps all your bills in the same place. Such conveniences play starring roles in the new campaign.

In one 30-second TV spot (“Dancer”) a bank employee working late cuts loose, dancing across the empty lobby to the 90’s techno hit “Rhythm is a Dancer.” He’s completely absorbed in some seriously smooth moves until a knock on the door interrupts his solo performance. “Sorry we were running late,” says the customer he’s been waiting to meet with. “No problem, come on in” the dancing banker responds cheerfully to the father and his young son.

In another TV commercial (“Password”), TD brilliantly attacks one of modern life’s most frustrating hassles: trying to remember all those passwords you need for your various online accounts. A woman sitting at home on her laptop calls out to her partner, “Hey Babe, what’s the password for the cable bill?”

“RollerbladeKing22, capital ‘K’,” says the middle-aged husband. His spouse throws a look that says, “Really? Rollerblade King?” More questions and passwords follow, each getting more absurd, including “The entire alphabet backwards.” It ends with a voice-over telling viewers to “Forget all your passwords. Bill pay on the TD Bank mobile app keeps all your bills in one place.”

Patrick McLean, EVP and CMO for TD Bank says humor helps people connect with TD Bank’s marketing messages. “I think we’ve all struggled to remember passwords. And I’m sure almost everybody — whether they would admit it or not — has danced alone to a song that they love or that they haven’t heard in a while. The humor just makes the ads very relatable to both consumers and employees alike.”

In the third spot (“Extra Time”), TD gets the entire marketing message out in the first seven seconds: the bank can replace debit cards instantly. This leaves another 23 seconds —  time that the advertiser awkwardly admits they aren’t sure how they should fill.

“Wow, just like that!” the customer responds. “And on a weekend too!”

The two actors then step out of character. “So, what do we do with the rest of time in this commercial?” the customer wonders aloud. The other actor playing the part of the employee says, “Oh, we could donate it!” Then the commercial cuts to a public service announcement of sorts. In one of multiple different endings to the “Extra Time” spot, a lumberjack type plugs TreePhilly.org (an actual charity the bank supports), before coming back to the two women in the bank and the closer: “Fast debit card replacement, even on weekends. TD Bank, Unexpectedly Human.”

All three  TV commercials will run in select markets from Maine to Florida, with placements in shows like Saturday Night Live, Modern Family, and Grey’s Anatomy, as well as the Oscars, Screen Actors Guild Awards, and the Grammys. Video reach will be extended in select markets via online video through providers like Roku, Apple TV, and Amazon.

The campaign includes video executions, billboards, outdoor, and social media. Outdoor components use over 100 hyper-localized targeted messages to highlight how TD Bank relates to customers in each unique community they serve. There are “takeovers” in New York City’s Grand Central Terminal, Washington DC’s Union Station, Boston’s Park Street, Philadelphia’s Dilworth and other key sites in- and around TD Bank’s east coast markets (a “takeover” is when an advertiser buys up all available ad space). 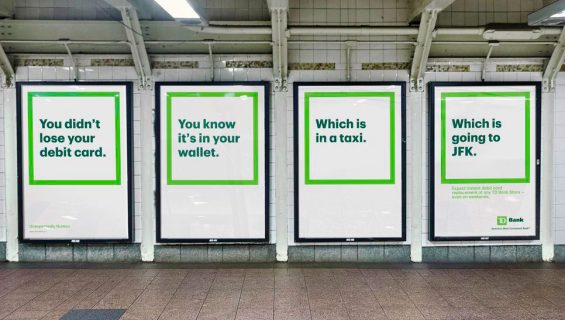 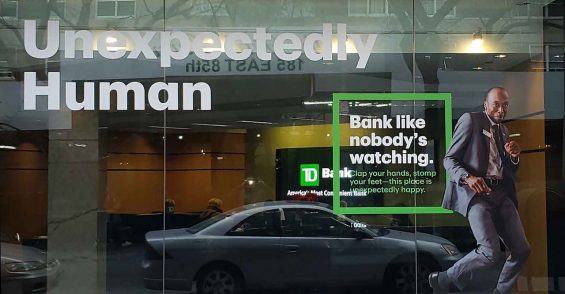 “The notion that people only want to interact in digital channels is false.”
— Patrick McLean, TD Bank

TD Bank believes the winning retail delivery model balances digital and human, with the ability to connect with a human if/when you want to. McLean says that belief underpins the messaging in the “Unexpectedly Human” campaign.

“We fundamentally believe that the notion that people only want to interact in digital channels is false,” McLean explains. “Things have changed and people are expecting a much more multi-channel experience. So what we strive to do is provide excellent service, and an excellent experience in retail branches, and augment that with digital investments.”

“We want to make sure that if you are engaging with us in our digital channels there is always a way to reach a human if you need one,” McLean says. The under-40 crowd of course want a great mobile experience, but they also truly value being able to speak to a human when they need to. He points to a TD Bank mobile banking feature called TD ASAP, a click-to-speak button in the app, which connects a user directly to a human in their call center.

“While mobile bill pay is not a face-to-face, direct human interaction, the experience itself is ‘human’ because we’re solving a human problem,” says McLean.

Insights from a Savvy Financial Marketer

As anyone who works in marketing knows, humor can be tricky. When it works, it really works. When it doesn’t, it flops hard. That didn’t scare off TD Bank’s leadership though. In fact, CEO Greg Braca was very engaged in the creation of the bank’s latest campaign.

For McLean, getting Braca’s approval for the approach wasn’t tough. In fact he says he gets more pushback when he presents marketing concepts that don’t meet the bar for the kind of energy and culture the bank has.

It helps that the institution has always challenged the status quo. Going all the way back to its roots under Commerce Bank founder Vernon Hill — a disruptor before the term was popular — the institution has had tremendous experience in pushing the marketing envelope.

For instance, a few years ago, TD Bank created an “Automatic Thanking Machine” (ATM) to show their appreciation for customers. TD used hidden cameras to capture the reactions of customers delighted by ATMs that dispensed the gifts of their dream. The resulting YouTube video amassed millions of views, making it the fastest viral mega-hit in the financial industry.

The new ads are more than just a catchy and clever campaign. McLean says Greg Braca looks at the campaign as a “call to action for the entire organization to meet the expectations of the ‘Unexpectedly Human’ promise.”

“The thing a CMO truly strives for is for brand positioning not just to be a campaign and not just to be advertising but to truly embed itself in the culture,” says McLean. His responsibility includes employee communication, along with running the bank’s “Wow” employee recognition program.

For other financial marketers undertaking a brand remake or refresh, McLean offers the following advice.

“First and foremost invest the time to get your leadership truly aligned with how you’re positioning your institution and how your brand shows up in the market,” recommends McLean. “If leadership is behind it, it’s really going to make a tremendous amount of difference as to how much the change takes hold within the organization.”

McLean also says CMOs need to focus on how they communicate branding campaigns to employees — not just on the advertising.

And with any brand campaign, the CMO had better be able to demonstrate that it’s working. That’s why TD Bank tracks several marketing KPIs very carefully. McLean says these include “brand equities around innovation and digital, and ease-of-use in our mobile and online banking experiences.” In addition, the bank is very focused on customer experience metrics using both J.D. Power and a custom indicator the bank calls Legendary Experience Index.

“And then, of course, at the end off the day we’re expecting this to drive business,” says McLean, with a bit of understatement.