Subscribe Now Get The Financial Brand Newsletter for FREE - Sign Up Now
Could branches operating as drive-through only simply stay that way? Bank and credit union leaders are actively reviewing all the options as they prepare to reopen branches where the pandemic suspended or sharply curtailed lobby service. In early-opening Georgia a pair of banks detail their short-term plans and longer-term thinking.

Almost all 50 states in the U.S. have begun to partially reopen. Even hard-hit New York is relaxing stay-at-home rules in several regions less impacted by Covid-19 than New York City and its suburbs.

The gradual reopening of the country remains highly controversial, however. This has banks and credit unions treading carefully in their own reopening plans. As of mid May, a survey of banks and credit unions in about ten states indicated that very few had fully or partially lifted the restrictions on in-person banking they had adopted in response to the Covid-19 crisis. About half were in the process of doing so.

Naturally the primary focus of the branch reopening decision is on customer and employee safety. But the decision and how customers react will likely be an indicator of how retail banking could look in the post-pandemic era.

This report draws on in-depth comments from the CEOs of a midsize community bank and a larger regional bank — both headquartered in Georgia, the first state to ease shelter-in-place restrictions — as well as on the results of a survey of about three dozen bank and credit union execs about their plans to reopen.

Georgia began to reopen April 24, but as has been widely reported, not all businesses eligible to open did so. Financial institutions there have not jumped to unwind the in-person banking restriction they put in place earlier in the year. More than two weeks after the partial opening, neither Ameris Bancorp, an $18 billion institution with over 100 branches in four southeastern states, and United Bank, a $1.8 billion community bank with 18 branches in ten Georgia counties, had altered the branch restrictions they operated under.

Like many institutions around the country, the restrictions at these banks primarily involved branch lobbies closed except by appointment, with drive-through banking, digital banking and call centers handling almost all retail and commercial banking needs.

United Bank was planning to open all its branch lobbies (with various restrictions and safeguards in place) on May 18, according to CEO Jim Edwards. Ameris Bank had not yet begun reopening as of mid May, but when it does it will be doing it in phases, as CEO Palmer Proctor told The Financial Brand.

In other parts of the country, nearly half (47%) of the bank and credit union respondents to a survey conducted by Rivel’s CXLign – Banking unit, are unsure of when they will reopen their branches to walk-in traffic. Just over two in five expected to have branches open by the end of June. 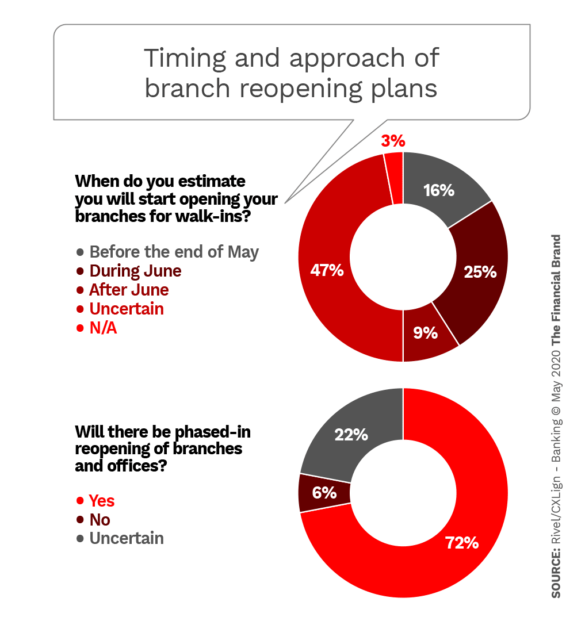 As shown in the lower chart, nearly three quarters of the banking executives expect to open in phases. An open-ended question in the survey asked what factors will determine the phases. Here is a representative sample of the verbatim responses:

Palmer Proctor says the reopening at Ameris will be based on local data. “It’s not like flipping a light switch and everybody comes back to work,” he states. “We’ve got certain areas that have been impacted by Covid-19 far more than others. So we’ll take more of a local approach to branch reopening. What we don’t want to do is perpetuate a problem for customers and employees. As we see certain markets improve we will reopen.”

“It’s not like flipping a light switch and everybody comes back to work. We’ll take more of a local approach to branch reopening.”
— Palmer Proctor, Ameris Bank

United Bank, with a smaller footprint than Ameris, is taking a different approach. It is reopening all 18 branch lobbies at once, but under a controlled scenario. As Jim Edwards tells The Financial Brand the bank will still encourage customers to make an appointment to come into a branch, but won’t require it now. “If they come to the door, we will let them in,” Edwards states.

At its larger branches, however, the bank will have an employee stationed outside in a tent-like structure who will act as both a greeter and a controller. Edwards says this person will find out what the customer needs and explain to them the social distancing requirements inside the branch. In addition, the employee will act as a “control valve” on how many people come into the branch. That could range from 10 to 12. The customer will be escorted into the branch to the person or area they need to visit, says Edwards.

Part of the challenge here is that, as Edwards says, “We’ve always prided ourselves on being a friendly place to do business. And we enjoy chatting with our customers and finding out about their family and what’s going on in our town.” Now bank employees will have to be courteous but make sure people get their business taken care of and move along so other customers can come in.

“Ask me a week into the reopening,” Edwards states wryly, “this may have to change a bit.”

However, the CEO does not expect a “massive rush from our customer base back into the lobbies.” For one thing, it will be easier for most people to continue using the bank’s drive-up interactive teller machines, ATMs, and digital channels. For another, people “are still concerned about the pandemic,” Edwards states.

Ameris Bank doesn’t expect to have to limit the number of customers allowed into a given branch. Observes Proctor: “Fortunately or unfortunately, depending on how you want to look at it, branch traffic is so minimal today, you don’t have to worry about too many people.”

The bank’s branches will have markers on the floor, however, to help customers maintain proper spacing. The markers will be paw prints, picking up on the bank’s lion logo.

Other banks and credit unions do plan on limiting the number of customers in a branch at one time. That measure was mentioned by almost two out of five (37%) of the respondents to the CXLign – Banking survey. Other verbatim comments:

Summing up these varied efforts, one respondent said: “A key concern is providing confidence for our customers and employees that they are safe, even if measures we take may be theatrical.”

(Rivel is expanding its Rapid Action Executive Community, from which the above comments and data were sourced, and welcomes bank and credit union executives to join. Contact Melissa Randi for details.)

Good Time to Rethink the Future of Retail Banking

Palmer Proctor shares a story that is funny, but also possibly very prophetic.

“My mother, who’s almost 80, typically loves to go to our branch down in Florida. After the pandemic began, I said to her, ‘You’ve got to start using the online banking.’ Well, she started using it. Now she loves it so much she doesn’t know if she’s ever going back to the branch!”

The CEO observes that the coronavirus crisis has forced a lot of the late adopters to embrace digital banking. “Certainly there are some who will still want to walk into branches,” Proctor states. However, he expects that when some financial institutions do their branch optimization reviews they will realize, depending on proximity of branch locations, that they might be able to just maintain a drive-through capacity for some branches while keeping select locations as full branches.

“You hate to say there’s a positive in a pandemic, but I do think a silver lining for our industry is educating customers that we have these other channels.”
— Jim Edwards, United Bank

Jim Edwards doesn’t think the traditional branch is going to “dry up and blow away,” but says that “longer term, we will probably see customers that got more comfortable using newer channels like interactive teller machines and digital continue to use them more.”

“You hate to say there’s a positive in a pandemic,” Edwards adds, “but I do think a silver lining for our industry is educating customers that we have these other channels.”

At the same time, Edwards states, the challenge for community institutions is to utilize technology to better serve customers, but not so much that they lose that personal touch and connectivity they are known for.

“We can thread that needle,” Edwards believes.

Adds Proctor: “We are living in the future right now. Do we have the best technology in place? What does customer engagement look like now? That’s really where banks have got to spend their time right now. Redefining the customer experience.”