Subscribe Now Get The Financial Brand Newsletter for FREE - Sign Up Now
A lack of clear goals and a disciplined process for achieving them can lead to digital transformation failure. According to the author of the book, 'Why Digital Transformations Fail', there is a proven five-stage process that can ensure a successful digital transformation at any sized organization.

The banking industry is in the midst of the Fourth Industrial Revolution, where physical and digital technologies are integrated to provide the potential for greater efficiency, increased innovation, new business models and improved customer experiences. While this revolution is similar to the previous three revolutions – disrupting and redefining entire industries – this one is progressing at a far faster pace.

Despite vast opportunities, increased consumer expectations and new competition, few organizations are prepared for this digital revolution. In fact, according to the State of Digital Banking Transformation report, published by the Digital Banking Report and sponsored by Pega, only 12% of financial institutions consider themselves to be digital transformation “leaders,” with 34% considering themselves to be “fast followers” and 55% stating they were either “mainstream players” or “laggards.”

DBR’s research found that digital transformation leaders separate themselves from the rest of the industry by using digital technologies and new business models to support innovation that puts the consumer first. These leaders create new products and services faster than the rest of the market by using a supportive culture that takes advantage of opportunities, minimizes threats and responds to consumer needs using new digital solutions.

As the author of the book, Why Digital Transformations Fail, Saldanha shares his 5-stage framework that any company can follow to successfully navigate its own digital transformation. In our interview he discusses why the ultimate proof of an organization’s success at digital transformation is its cultural, not technical, rewiring.

An abridged version of my interview is included below. 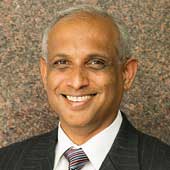 What is your definition of digital transformation?

Saldanha: I once surveyed 100 people, and as you can imagine, received 100 different answers. My definition is the combination of people, processes and systems necessary to win in the Fourth Industrial Revolution.

Finance and banking is absolutely in the cross hairs, because a combination of these technologies, including the internet, digital capabilities, as well as things like blockchain, make this particularly vulnerable to change.

Why do digital transformations fail?

Unfortunately, most digital transformations are still run with IT project management methodology, which misses the need to completely change the culture of the organizations themselves. To address this, I used a checklist methodology that helps to mitigate the 70% failure rate.

Can you describe the 5-stage model?

Stage three is “partially synchronized,” which is essentially the partial conversion of the entire company. The best example of that is General Electric under a Jeff Immelt, who set about with a vision and got the entire company kind of moving in that direction. The efforts are only partially synchronized because they were not able to execute across the whole company against that vision. 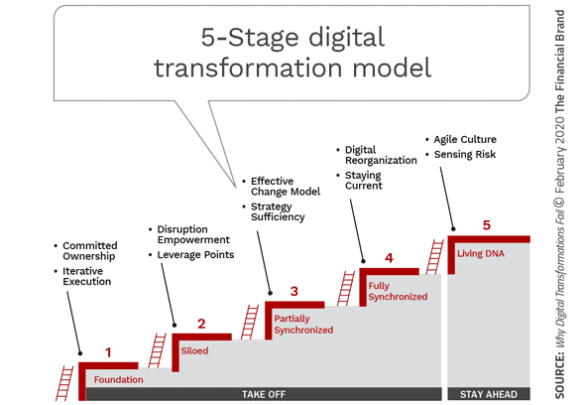 Stage four is what I call “fully synchronized.” That’s when the entire company is able to do a one-time transformation of the business model into the Fourth Industrial Revolution. A good example of that is MapQuest, which still exists. MapQuest was incredibly disruptive in the early 2000s. Today, thanks to GPS and directions being available on every smart phone, MapQuest pretty much became irrelevant. The issue with stage four is that a firm may be able to transform to the latest business model, but the next disruption still catches firms by surprise.

Finally, there is stage five, which is what I call “living DNA.” That’s when the DNA of the organization becomes one of disrupting your own business model over and over again. Netflix is an example of that. They went from mailing DVDs, to streaming media, to an original content model — all within a space of 20 years.

The ability to disrupt yourself has got to be part of the organizational DNA.

Where are most organizations today?

Saldanha: Let’s look at organizations that have a digital transformation agenda, which by the way, isn’t a whole lot of companies. Most are usually at stage two, which is siloed, or stage three, which is partially synchronized. That’s understandable in the sense that they’re just grappling with the fact that they have to do something.

The biggest challenge I see: Most organizations emphasize the digital part of digital transformation and not enough on the transformation itself – which is an organization change, management and HR process. That’s really what’s necessary for many of these companies to go past stage three into stage four and then stage five.

How engaged must top management be?

The problem I have with that is that’s involvement, that’s sponsorship, but that’s not a skin in the game commitment. I went back and forth on trying to figure out what word to use along with leadership here, and then I chose “commitment” and then “ownership” and not just “leadership” or “empowerment.”

Is it tougher to transform when ‘times are good’?

During the global economic crisis in 2008, banking was hit very, very hard and they made a lot of really good changes there to essentially recover. They recovered very quickly – in two or three years. That type of urgency is needed today, despite positive financial conditions.

What role does data play in the digital transformation process?

Saldanha: A huge, huge role. Many firms are finally understanding that every company is a data company. Wall Street is recognizing data companies, like Amazon, and the valuations of these companies reflects this advantage as it relates to digital transformation.

I define digital transformation in business outcome terms. You’re either creating completely new business models, like selling online instead of just brick and mortar, or you create disruptive business process capabilities like real time closing of books instead of having a mass of people to do that. The third digital transformation outcome is creating digital products like smart toothbrushes or smart cars.

Why do companies fail midway through your 5-stage process?

Saldanha: There are many organizations that take their foot off the pedal. I think part of the reason is the reward mechanism of Wall Street and others that basically are more focused on short-term financial results change as opposed to long-term systemic organization culture change.

There are other companies that “double down” in the middle or later stages. For instance, Amazon declared that they were going to invest $700 million to digitally retrain their staff. That would be very hard for most companies. If Walmart had made that same reserve, they would be hit really, really hard in their stock price. That’s the challenge. I think the difference between the middle stages of digital transformation and the living DNA stage is essentially organizational culture change. That’s an investment that’s really, really hard to quantify for many companies.

How do companies deal with the current talent shortage?

Saldanha: That is a really, really good question. It’s actually one that’s getting a lot of thought and a lot of air time. I serve on MIT’s Work of the Future Task Force. One of the things that we’re trying to figure out is how do we sustainably source this talent? First and foremost, every organization needs to have a digital literacy and a digital change HR plan. Most organizations try and look at their technologists or digital officers to essentially own that strategy. I think there’s equal claim for it to be driven by HR, because it’s a culture change.

In terms of very specific skills like data science, the better strategy for most companies is a part buy and a part grow your own talent proposition. There is a case to be made for getting very, very long-term people development-oriented in this space. Then obviously, that’s not going to meet all the needs. Then you have to have a strategy of buying at retail price in the marketplace.

How do organizations get started?

Saldanha: The first step is for firms to acknowledge that we’re in the midst of the Fourth Industrial Revolution and that there is a need for a different set of strategies than what’s worked in the past. There needs to be an understanding from the very top of organizations that they need to have a disruptive innovation plan and a strategy. In my book, I talk about ten different disciplines and how to go about this one by one, but that’s really where I would start.

My Takeaways From the Interview of Tony Saldanha

First of all, I genuinely believe that Saldanha’s book, Why Digital Transformations Fail, is a great read. The book really talks about the staging of the process – going from a point where it’s simply the organization or the leadership buying into partial transformation to full transformation to changing the culture and then actually having an agile culture. The step process is really easy to visualize and to actually implement.

Finally, the last takeaway is that if there’s not a pain, there won’t be motion or action. I’d say that 70% of organizations are at the very first stage. These firms need to move forward. They need to understand that there is pain — and that if they’re not feeling it now, they’re going to feel it later.