Subscribe Now Get The Financial Brand Newsletter for FREE - Sign Up Now
According to a new study, tech companies are winning the battle for payments, branches will disappear, and mobile banking dominates delivery options. For now, financial institutions maintain a big edge over fintechs, but consumers would welcome more personalized advice and new security tools.

The usual view of the future of banking comes from industry observers and key players within the industry, who represent important viewpoints, to be sure. Yet consumers deal with banking issues frequently, if not daily. Banking is an essential and integral part of their lives.

What do consumers think about the future of the industry?

Rapidly changing consumer habits are one of the main forces behind the sweeping upheaval of the status quo in banking. MX, the digital transformation platform, conducted two consumer surveys in late 2019, each one generating just over 1,000 responses. These were distilled into two reports: The Ultimate Guide to Digital Transformation and The Ultimate Guide to the Future of Banking. The latter in particular offers much data on how consumers see banking changing, along with how they currently conduct their banking activities. The firm also offers some practical advice for digital transformation, summarized later in this article.

As MX states, “two deep currents” are driving changes within the banking industry: More choice and less friction. Both are inseparably intertwined. Any consumer with access to the internet can search for “home loan rates” or “high-interest savings.” They can have hundreds of options available instantly — not only to peruse passively, but to actively engage with, in many cases, from their digital device.

Intuitive mobile apps create “less friction” to opening accounts or taking out a loan. People no longer have to come to a branch for most transactions.

So, at least at some level people still use financial institution branches. Will that continue, and for how long?

The researchers then asked a more nuanced question with choices ranging from “no branches” to “more branches” and even “tech company banks.” 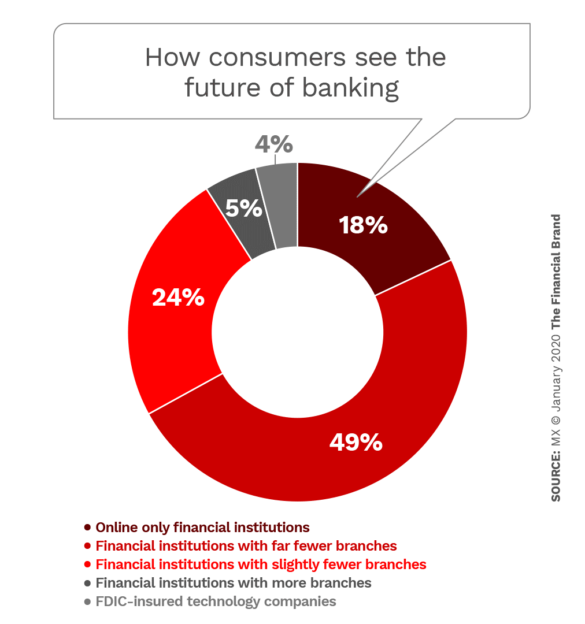 Here less than one in five predicted the future of banking lies with online-only banks like Ally or Discover. Just over three quarters expected branches to be part of banking’s future, although nearly half felt there would be far fewer of them than now.

Commenting on the low percentage of people predicting an “online-only” future for banking, Jon Ogden, Head of Strategic Content at MX, tells The Financial Brand that “In spite of all the advancements in digital technology, many consumers still want to interact with a human for certain banking transactions. That said, these interactions don’t necessarily have to be in person. If digital-only banks can perfect the human element via video phone calls and instant online chat, consumers may come to see these banks can be the way of the future.”

On the other hand, Ogden also believes that if traditional institutions train their staff to be financial experts who guide account holders toward financial strength, consumers may increasingly realize that going into the branch brings a range of personal benefits beyond transactional.

No one or two data points can provide a complete picture of the future of consumer banking, and the MX research probed several other points that, taken together, add more depth to the picture.

One survey question reflects actual consumer behavior rather than opinion — in this case how often they use mobile banking. 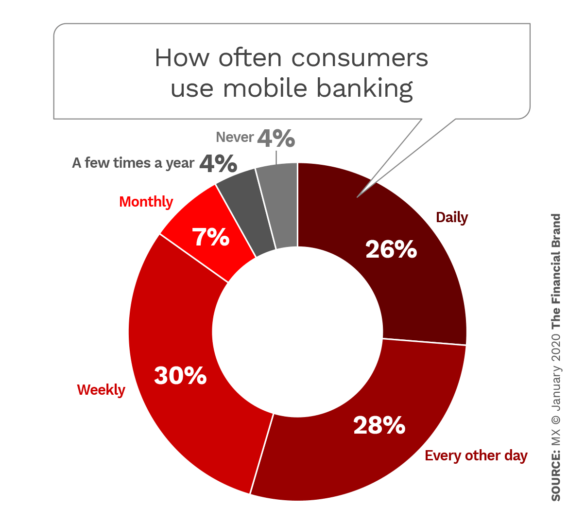 More than eight in ten (84%) say they use mobile banking at least weekly and more than half use it every one to two days. Compare that to the 18% who visited a branch in the past week, the report states.

But banking defined broadly is not restricted to banks and credit unions anymore. As mentioned earlier consumers (and businesses) have many more options for home loans, auto loans, payments and even deposits, although with the latter, the funds, if insured, would ultimately be held in a regulated institution. The Future of Banking survey probed how comfortable consumers were using “tech companies” (really more fintechs) for banking activities. 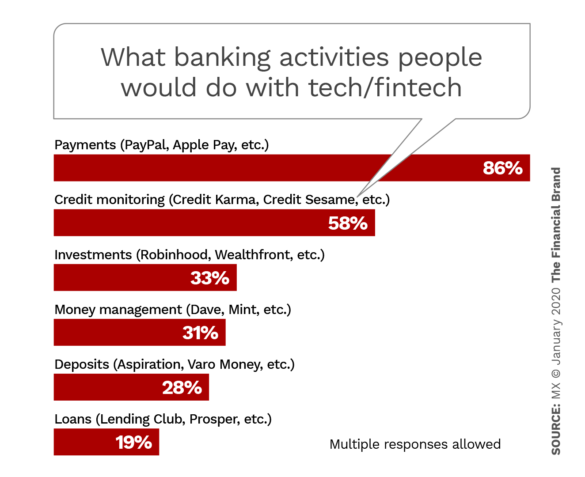 The rather startling fact that almost nine in ten consumers feel comfortable having a company like Apple or PayPal handle their transactions suggests that the fight for the payments business may be over — at least over in the sense of banking industry dominance.

“Taken together, this data should give traditional institutions pause,” the report states.

Somewhat offsetting the rather ominous findings cited above were several positive findings from the two MX consumer surveys. Notwithstanding their professed willingness to use tech companies for a variety of financial products and services, three quarters of consumers feel that the banking industry is keeping pace with other industries in terms of digital transformation. While that result may be satisfying, the report suggests that “Each financial institution should ask itself: ‘Are we keeping pace with, or falling behind, the most advanced companies in financial services?'”

In addition consumers could easily form their opinion of the “banking industry” based on such national banking brands as Capital One, Ally, Chase, Bank of America and USAA, all of which are well known for keeping up digitally.

Trust provides another positive finding for banks and credit unions. People overwhelmingly select financial institutions over tech companies as organizations they would trust to securely manage their financial data. 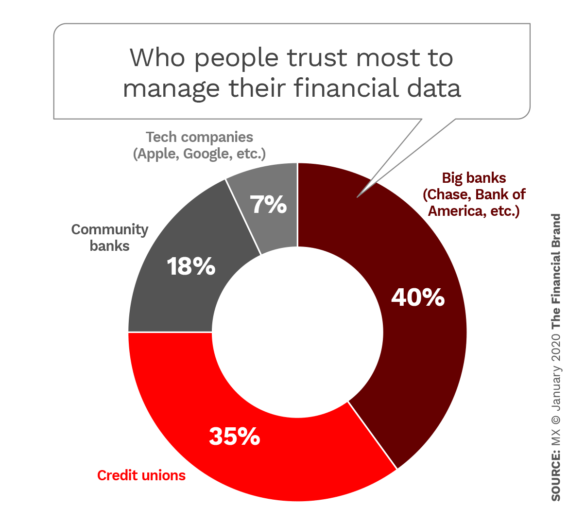 A side note: the people who would trust tech companies to manage their financial data would choose four of the five major players — Amazon, Apple, Google and Microsoft about equally, at a quarter each. Only 1%, would choose Facebook.

But, again, a related question uncovers some weakness in the trust consumers have for their financial institution. Yes, consumers overwhelmingly trust banks and credit unions over big tech companies, but when asked how much they trust their financial institution with their data, nearly half (46%) say they “somewhat trust” their institution, but just 19% indicate “complete trust,” and about the same number (20%) are “neutral.” Not exactly a ringing endorsement.

This matter of trust is crucial to weigh carefully as financial institutions embrace a more aggressive use of data, likely to be a key competitive differentiator, over the next several years. (More on data below.)

Many observers, including bank and credit union executives, have noted how most consumer banking products have become commoditized. A couple of questions posed by the MX research relate to this. The first, shown below, highlights the potential for customer experience to help differentiate institutions.

What do you want most from your financial institution?

The second question probes what types of products and services consumers would be interested in if their financial institution offered it. 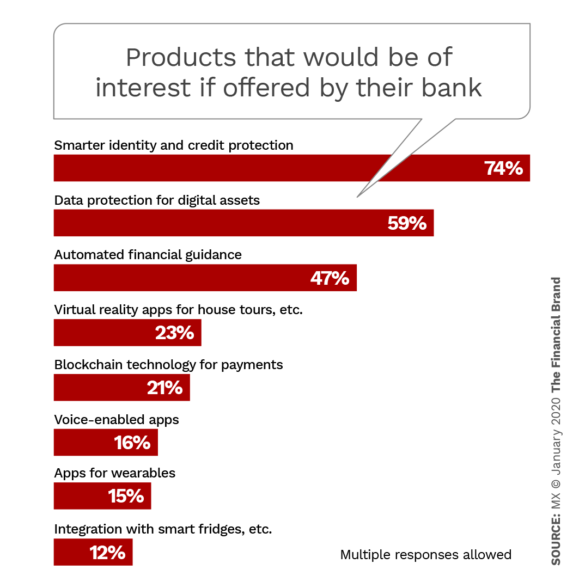 As the chart shows, protective services for identity, credit and data came in very strongly, with automated financial guidance a strong third.

Given that there were more than 14 million victims of identity fraud in 2018, the report suggests that banks and credit unions can help strengthen the trust consumers already have in them by offering heightened identity credit and data protections services.

(The fact that one in five respondents selected “blockchain for payments” as a product of interest, suggests a fairly savvy group of respondents.)

The report uses advanced car technology as an analogy for automated financial services. “Just as new cars include lane sensors, vehicle avoidance indicators, and cameras to give warnings so people can avoid accidents, financial institutions should likewise guide customers toward financial health and away from financial disasters.” Advanced algorithms can enable banks and credit union apps to provide automated insights and, when necessary, nudges to consumers in their day-to-day financial decisions.

To Prepare for the Future, First Focus on Data

The Future of Banking report lays out several steps to help financial institutions meet the expectations and opportunities suggested by its research. One key point made is that it’s crucial to distinguish within each institution the people who have a legacy mindset (i.e. “those who resist adapting to changing business models”) and those with a legacy skill set (i.e. “those who want t adapt but don’t yet have the skills.) Dealing with the first group, naturally, is more challenging.

“The truth is, if your data isn’t … cleansed, categorized, classified and contextualized, the technology of the future won’t work.””

Further, the report states that too many banking leaders, even when their mindset is right, “leap ahead to cutting-edge front-end products such as chatbots or voice-assisted devices before they’ve laid down the proper foundation of clean data. The truth is if your data isn’t … cleansed, categorized, classified and contextualized, the technology of the future won’t work.”

In its Guide to Digital Transformation, MX expands on the crucial role of data for financial institutions. The cleansing and categorization of data comes under the broader category of data enhancement and applies particularly to transaction data, of which financial institutions have a great deal.

Using enhanced transaction data, a bank or credit union would be able to provide personalized financial advice. For example an institution could offer a service that tracks and flags a consumer’s subscriptions, so they know what they’re paying every month. Eight in ten consumers say they would value such a feature.

“Consumers want to know that you have their best interests in mind — that you’re using their data to help them,” the report states.

Another example of advanced data use is the ability to advise a customer that your institution could offer them a better deal on a mortgage loan or savings account than the one they have from another source, based on what the data show.

By analyzing transaction data in an automated, categorized way, an institution can learn how and when money leaves for a competitor. This “data discovery” process as MX calls it enables the institution to target these customers with a personalized offer that beats a competitors’ offer.