What was once a platform primarily for selfies and pop culture iconography has become the fastest-growing social media platform in the world and a valuable network for banks and credit unions. With only so much money and time to spend on social media, should financial marketers dump Facebook in favor of Instagram?

Let’s be clear. No one truly thinks Facebook will go the way of Myspace. It has immense legacy power in the world of social media and is used by three-fourths of the U.S. adult population to connect with friends and family, read the news, share ideas, and learn about products and services. And the fact that Facebook owns Instagram rules out the idea of a direct head-to-head war for users and advertising revenues.

But the fact remains: Facebook usage overall has leveled off in the past three years, and now Instagram is the fastest-growing social media platform in the world. Facebook has been losing share in some select demographics in recent years, and the growing preference for Instagram by young people is making it increasingly attractive to financial marketers.

Pew Research Center reported Facebook usage among teenagers (13-17) plummeted from 71% to 51% in the space of three years. As of 2018 Facebook had fallen to fourth among the teen segment behind YouTube (85%), Instagram (72%) and Snapchat (69%). It’s likely that these social habits, once established, will continue as these young consumers become prime potential banking customers.

What is killing Facebook is too much commercialization, Nara Emdjian wrote in a Quora post. “Once a social media platform which was aimed at friendship and socialization,” Emdjian says, “today Facebook [is] all about control over content, making more money from ads and manipulating news feeds.”

Financial marketers need to take a closer look at these two social media channels to determine which offers the most opportunity and value.

The ‘King of Social Media’ Hits a Plateau

Facebook acquired Instagram in April 2012 in a $1 billion deal to enhance its mobile engagement. While Facebook was hardly generating any mobile revenues at the time of the acquisition, mobile advertising now represents 93% of advertising income, according to the company’s Q1 results for 2019.

“In some ways we considered Instagram to be a competitor, but we have always thought that the better way to think about Instagram was that it was complementary to Facebook and what we’re doing,” Facebook CEO Mark Zuckerberg told analysts in October 2019.

Despite negative headlines about privacy, manipulative algorithms, and declining enthusiasm for the platform, Facebook remains the king of social media. The site now has more than 2.41 billion monthly active users, and is used by 71% of American adults. Three-fourths of users log in daily and spend an average of 38 minutes on the platform. 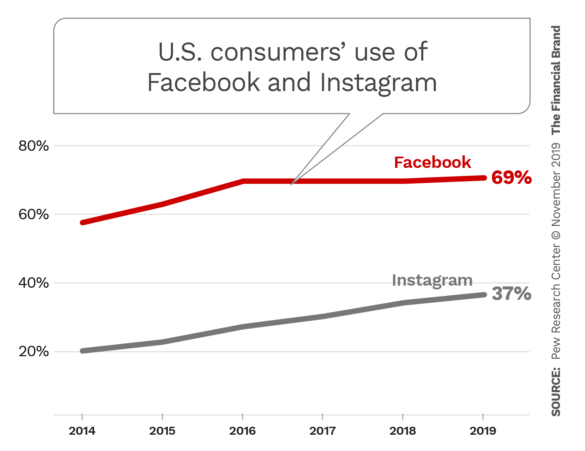 While Facebook has been the go-to social media site for more than a decade, usage started to plateau back in 2016, according to Pew Research.

During that same period, the percentage of Americans using Instagram has grown by double digits. Instagram is now used by 37% of Americans, and Hootsuite estimates it currently has a potential advertising reach of nearly 850 million global users. More than 63% of its users login daily, spending an average of 28 minutes on the site.

Instagram is also becoming more useful for business. Roughly 200 million users visit at least one business profile per day, and 62% of these users say they have become more interested in a brand or product after seeing it in Instagram Stories. Typically these Stories are a blend of slideshows, video, images and text in a vertical, mobile-friendly frame. eMarketer predicts that nearly a quarter of U.S. business will use Instagram in 2020 and create more than one-third of the most viewed Stories.

Facebook remains by far the primary choice for financial marketing activities, and is used by 97% of financial institutions compared with roughly half that use Instagram, according to the American Bankers Association.

On the Instagram page for U.S. Bank, candid images of dogs, cats and kids are a recurring theme. U.S. Bank has 14,000 Instagram followers, and some of the most popular and liked posts have been about dogs, veterans and LGBTQ.

Mountain America Credit Union posts images of dogs, cats and kids along with short inspirational quotes from such personalities as Susie Orman and Reese Witherspoon.

Capital One has generated quite a bit of buzz on Instagram with Taylor Swift. One 2019 post offering an exclusive opportunity to buy a limited edition t-shirt and pre-order a new album generated 63,000 views. 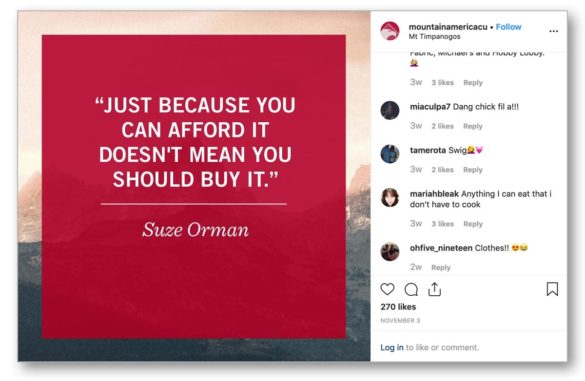 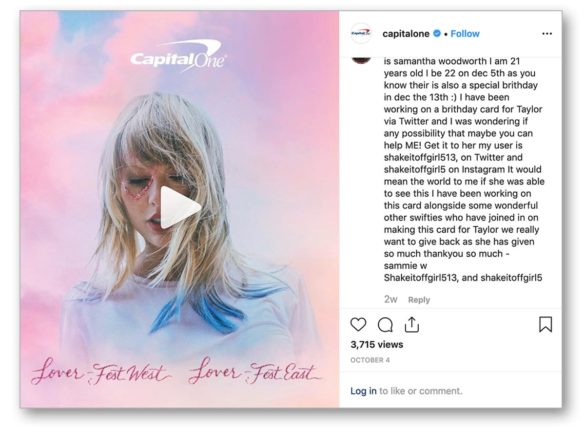 For example, U.S. Bank’s Facebook page features articles on tax tips, entrepreneurship, and careers with content that is nowhere to be found on its Instagram page. 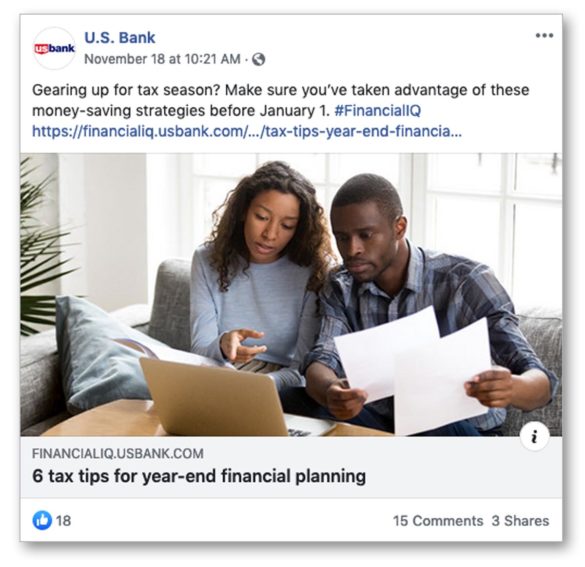 It’s also worth noting that both platforms lead to different types and levels of engagement.

Many bank Facebook pages have millions of followers with surprisingly little activity. While Bank of America has around 2.8 million Facebook likes and followers, for example, most of its posts on that platform generate less than 200 interactions. Yet its Instagram page, which has only 123,000 followers, regularly attracts a few hundred or more “hearts” per image and an average of 2,000 views per video.

The Best Uses of Both Platforms

Both Facebook and Instagram can help financial marketers reach different demographics. The ongoing integration between the two platforms is also making it easier for banks and credit unions to simultaneously manage campaigns.

Facebook touts a case study about how one of Turkey’s largest banks increased its app logins by 25% using mobile-optimized Facebook and Instagram video ads to promote a new dashboard feature. The campaign resulted in a 5.7% lift in ad recall with video ads, and a 3.3% lift in campaign awareness.

“To convey our message in the short attention frame, we introduced the main message of the product, highlighting the most important points in accordance with trends,” said Bora Uludüz, SVP/Digital Banking at Garanti Bank.

One benefit of Facebook is that most financial marketers are already familiar with it. Nikola Banicek, Internet Marketing Specialist at Point Visible, says some best practices for financial brands include targeting Millennials, being visual, and focusing on customer service. Educational content and interactive posts such as surveys and questions can also go a long way on Facebook, Banicek states.

While Instagram offers a different way to engage consumers, it can also be a more challenging platform for traditional banks to grasp. Susan Shain of Aha Media says in a blog that marketers must make presentation “everything” on Instagram. Posts should adhere to a specific style, attraction should be emphasized over selling, and imagery should be used to elicit emotion. One example is Chime which disperses its user stories, quotes and tips with funny memes that can attract many likes. 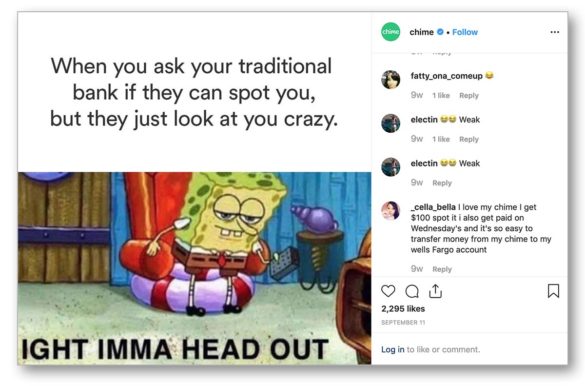 “Personal finance doesn’t have to be boring,” Shain explains. “While goofy posts wouldn’t work for many brands, they fit Chime’s voice, and resonate with the users Chime wants to attract.”

Organic and Paid Placement Both Work

Facebook and Instagram offer both organic and paid placement opportunities. Paid advertising on Instagram for Business enables marketers to use Stories ads, Photo ads, Video ads, Carousel ads, and collection ads which enable the marketer to show a collage of images. Facebook for Business offers a variety of paid placement options not only on the main site but also on Instagram, Messenger and Audience networks.

One benefit of the Facebook advertising interface is that it enables marketers to easily manage both Facebook and Instagram campaigns from one location. And the Facebook for Financial Services page makes it even easier for banks and credit unions to refine their strategies within the industry. 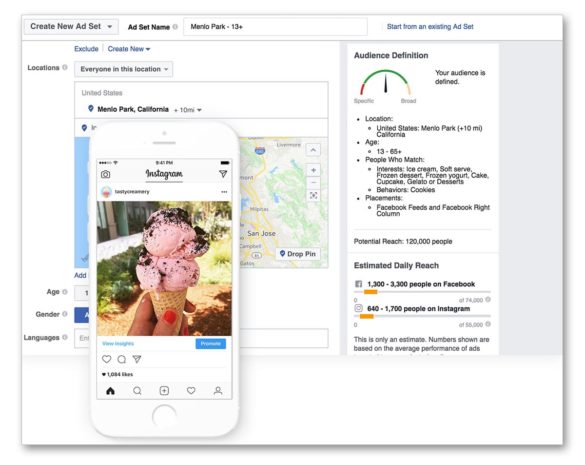 In August 2019, Facebook took a major step to combine the two platforms when it announced it was working on a feature to enable Instagram’s chat feature to work seamlessly with Facebook Messenger. It remains to be seen which platform will lead the way or what the end result will look like.