Many have questioned the viability of the digital-only banking concept after the largest U.S. bank announced the shutdown of its much heralded mobile-only brand. Don't bet on it. Timing, rather than functionality, lay behind Chase Bank's move, an expert insists. Banks and credit unions must use this period to readjust their thinking on digital banking.

Finn, we hardly got to know you! Why did Chase pull the plug, and what are the lessons from the latest failed attempt to create a robust digital bank.

Chase rolled out its digital bank, Finn, with great fanfare in October 2017. Less than two years later, it’s effectively gone (or will be, officially, in August).

It’s been 20 years and the industry just can’t seem to get the digital model right.

BankOne, one of the banks acquired by Chase, launched Wingspan Bank (“If your bank could start over, this is what it would be”) in 1999. It had about the same lifespan as Finn. In the wake of the Chase announcement, HSBC announced it would discontinue its digital bank, and Fifth Third proclaimed it had no plans for one.

The internet and industry press are full of speculation about the reasons for Finn’s termination: Conflict between traditional channels and new digital channels, with traditionalists winning? Insufficiently unique — they just didn’t get what people really want? Bad platform, built on the bank’s core offering and not new from the ground up — i.e. not a digital-to-the-roots reinvention of banking?

Why Demise of Finn is Absolutely No Reason to Relax

There are five reasons why Finn didn’t succeed.

1. Demand for digital-only is just not there — yet.

Despite what the early adopters and the digirati would have you believe, very few people want digital-only banking. Surveys by Celent show the disconnect between financial institutions’ perceptions and their customers’ actual desire for digital channels. Only 6% of consumers prefer to bank without ever using branches, but bankers perceive this to be 15%. At the other end of the spectrum, many bank and credit union executives appear to underestimate preference for in-person interaction. 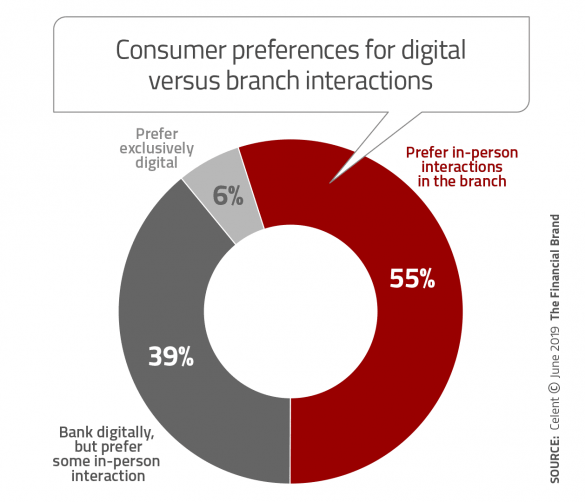 2. Most accounts are still opened in branches— for now.

Some argue this is because financial institutions have not offered the type of experience that makes it simple for consumers to open accounts except in branches.

Maybe. But the fact remains, branches are the primary channel.

Read More: How to Acquire More Checking Accounts in an Amazon World

3. The customer experience is not there — yet.

Speaking of the customer experience, consumers are happier when they have a person-to-person interaction.

Conventional wisdom would suggest that younger consumers would be generally happier with the digital experience compared to older people. But a surprising takeaway from the J.D. Power study is that lower satisfaction with digital is consistent across age groups.

The message: Digital designers haven’t figured out a way to replicate the richness of the personal interaction, which typically occurs in the branch. Until this challenge has been met, digital-only or digital-first financial relationships will have primarily niche appeal. 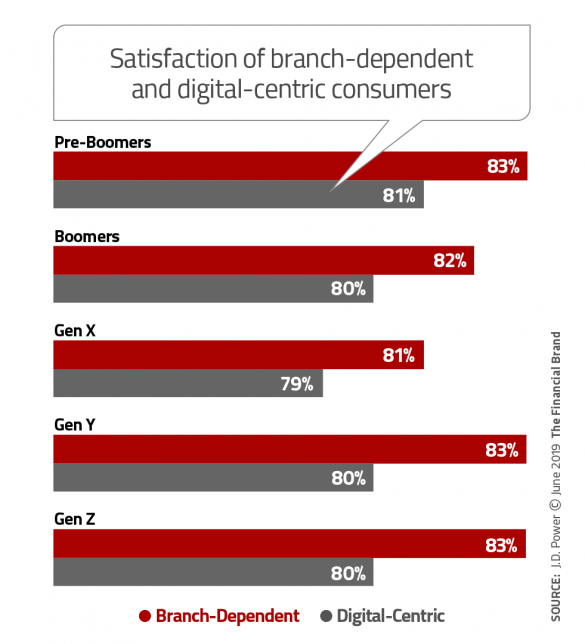 My associate Jon Voorhees wrote a recent analysis for The Financial Brand examining branches opened by the largest banks in the past few years —and they are doing very well. Chase, in particular, has demonstrated strong growth in deposits in their new branches.

Will branches be as dominant in the future as they are now? It’s not likely. But for now, and for the near term, they are — and if you want to grow, you need to continue to invest in the primary channel customers actually use.

On-line banks have been successful in growing savings and time deposits, but their success with transaction accounts — demand deposits which are the basis of the core banking relationship — continues to be limited.

The on-line banks have succeeded in growing deposits because they pay significantly higher rates. When you add the higher cost of funds, and the marketing expense to grow deposits, their return on assets is 45% lower than the average bank.

Digital Migration is a Thing, But Not the Whole Thing

None of this is to suggest that banks and credit unions lagging the digital trend should be complacent. Consumers are moving to digital, but they are parsing their behavior between transactions and routine servicing (on-line or mobile) and personal service and advice (in branches). Over time, as the technology improves and mobile bandwidth increases with the implementation of 5G, digital banking will be more viable.

As we look to the pace of digital adoption, self-driving cars provide a model. As Elon Musk reminds us, Teslas are quite capable of driving themselves from one point to another. But consumers are not ready to trust them.

However, we are all using self-driving technology more than we may realize. My car now has Google Maps embedded in its digital display. Dynamic cruise control maintains a safe distance from the vehicle in front. Lane control keeps the car in line.

And every year, as the technology improves, so self-driving cars are arriving in an evolutionary way. I believe that’s the way the transformation of banking from branch-based to digital will happen.

Laying the Foundation Today for a Digital Banking Tomorrow

As a practical matter, what should financial institutions do to migrate their business model, and provide the right combination of physical and digital experience?

We are continually surprised at how many institutions invest in new digital services without detailed knowledge of the basic who, what, where metrics. There are three leverage points.

2. Do the research on consumer preferences.

Analytical techniques, such as structured equation modeling or conjoint analysis, can accurately predict which features will enjoy greater acceptance and produce more business impact. As digital capabilities have grown, preferences have changed. Mobile check deposit was a game changer several years ago, but is table stakes today — everyone has it. On the other hand, there are new features and benefits that offer enhanced security, or faster payment, or financial planning that have high perceived value.

3. Integrate the physical and digital experience.

Consumers are not all physical or all-digital but use a combination of both channels. Make sure your branch staff is continuously helping customers understand all the ways your institution can serve them. That means every new account and every service transaction also includes validating whether your mobile app is on their smartphone, and they are comfortable using all the capabilities you offer.