Subscribe Now Get The Financial Brand's FREE Email Newsletter
Defined as "a significant cultural, political, or social change arising from the actions or influence of young people," today "youthquake" reflects the impact of Millennials on the economy and every industry. Even as Gen Z's turn on center stage looms, Millennials still challenge marketers. How well does your organization understand this generation's impact?

By Rocky Scopelliti, Director, Center for Industry 4.0 at Optus

We are living in the age of accelerated transformation. While not necessarily new to us, the frequency, pace and impact of transformation is. There has never been a more important time to stop and consider the question of: “How will we increase our capacity to adapt to a world of accelerated change?”

To answer this question, we need to explore the relationship between demographic change in the context of the environment that we can anticipate it will be exposed to. As President John F. Kennedy said, “The future promise of any nation can be directly measured by the present prospects of its youth.” 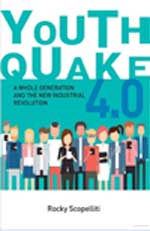 “Youthquake,” The Oxford Dictionaries’ 2017 Word of the Year, is defined as a “significant cultural, political, or social change arising from the actions or influence of young people.”

Surprisingly, this is not a new term. Youthquake was first coined by Diana Vreeland, Vogue magazine’s Editor-in-Chief, in 1965 to describe the cultural movement on the streets of London by a new generation of young people we now know as Baby Boomers. “Youth is surprising countries east and west with a sense of assurance serene beyond all years,” Vreeland wrote.

Ironically the term “renaissance” five decades later has been used to describe Baby Boomers’ children – the Millennials. We shouldn’t be surprised that the first and most powerful influence on Millennials was their parents. Youthquake for Baby Boomers was so well captured in the lyrics “There’s a whole generation, With a new explanation, People in motion” in Scott McKenzie’s 1967 hit single song and generational anthem “San Francisco (Be Sure to Wear Flowers in Your Hair.” The song reached number one encapsulating the spirit of a generation during the 60s craving significant cultural, political and social change.

Or are Millennials simply a generation that, like their Baby Boomer parents, have shaped their social, cultural and economic beliefs based on the environment in which they grew up? For example, might Millennials’ perceived disloyalty reflect their perfectly understandable need to explore life’s options? Might their perceived entitlement be a misinterpretation of their empowerment? Might their preoccupation with technology reflect their desire to remain connected with their own relationships within their communities?

The tsunami of stereotyping and typecasting directed at Millennials would seem to be overgeneralizations born of misinterpretations, since they seem to be clearer than many older generations about how to live in the contemporary world and they have a vision for its future. To them, the world is their neighborhood.

It’s worth reflecting on one of the many essential points about their mostly Baby Boomer parents to help explain their influence on Millennials. Baby Boomers were shaped by two different and contradictory influences on their view of the future.

First, Baby Boomers grew up in the postwar economic boom of the second industrial revolution where electric power was used to achieve mass production and the division of labor. There wasn’t just a baby boom, but manufacturing, mining, housing booms. The period also saw the rise of the working class. Baby Boomers were enveloped in prosperity developing an unquenchable thirst for in-home appliances, telephones fixed to walls, white goods, televisions, motor vehicles, and leisure activities that fueled the creation of many new consumer markets.

The era ushered in suburbia. New neighborhoods sprang up and the locality symbolized status, class and lifestyles. To Baby Boomers, life was a never-ending pathway of gratification, with the promise of success, wealth and opulence.

The second powerful but contradictory influence on Baby Boomers was the Cold War. They were growing up in the era of mutually assured destruction. This was the era of nuclear weapons being massively stockpiled by the USA and the then USSR, and the threat they would be used, triggering world war three. Baby Boomers grew up with tension points in countries around the world that were backed by the two superpowers.

So how did they reconcile these contradictory influences? Their motivation shifted from delayed gratification, to embracing instant gratification despite this description being synonymous with Millennials. Baby Boomers’ generational catch-cry was:

Baby Boomers were labelled the “Me Generation” by their parents – the Silent Generation born between 1927-1945 – who were puzzled by their self-indulgent, live-for-now mentality and liberated sexuality brought about by the contraceptive pill. Baby Boomers were living in a way that was consistent with these contradictory influences.

As history now records, Baby Boomers were thankfully here for a long time – but a difficult one. The good times of the 60s were not fulfilled by the events of the 70s, 80s and 90s. Life was much harder for the Baby Boomers than they envisioned.

They were living through a “Youthquake” that was characterized by transformations such as the gender revolution, which reshaped our views on marriage and divorce and redefined the nature of family life. Economies were restructured including a radical redistribution of work and wealth between classes, there were levels of unemployment not seen since the Great Depression, and the beginning of the information technology revolution. While Baby Boomers were living the dream of retiring at 55, changes to the retirement age in many countries, a lack of planning, and the global financial crisis has seen most continue working for longer to achieve financial security in retirement.

Millennials: Different Than Their Parents

The Millennial “Youthquake”‘ was different than their parents. They grew up in the digital revolution that began in the 1980s, where the advancement of technology saw the shift from mechanical and analogue electronic technology to digital electronics. In that information technology environment, Millennials became the most highly educated, diverse, media saturated and connected generation. They are now shaping the 21st century and will propel the fourth industrial revolution.

To Millennials, their voice and influence is global through the social media they fueled and continue to fuel. It’s instantly delivered to their smartphones and that’s become as natural to them as the air they breathe, efficiently consumed through the artificially intelligent, personalized, platform-based, exponential models serving them. We need to embrace them, not ostracize them. We need to go beyond just listening to them as they crave to be heard. For this generation, their catch cry will be:

Millennials (18-34 years) have now become the largest demographic group on the planet representing one in three (2.1 billion) people. They are likely to be the first generation to have a 50% chance of living to 100 years. This means they are also likely to see the emergence of four-generation families and so our notion of family structure will profoundly change from what we’ve ever known. Their proportionate representation in society – whether it’s as business leaders or policy makers in the workplace, government or institutions or whether they are influencing spiritual, academic, scientific or technological advances – will only increase from here on.

‘Juvenescence’ and the 4th Industrial Revolution

“Juvenescence” is defined as the constant state of youthfulness. We can apply the meaning of this word as a principle upon which we live our lives, and as a leadership principle for how manage organizations which need to constantly adapt in a world of accelerated change.

As Klaus Schwab, Founder and Executive Chairman of the World Economic Forum describes “we are at the beginning of the 4th Industrial Revolution that is fundamentally changing the way we live, work and relate to one another”. He also proposes that “businesses, industries and corporations will face continuous Darwinian pressure and as such, the philosophy of “always in beta” always evolving will become more prevalent” .

This juvenescence philosophy directly informs the question at hand – in this environment, how do we increase our capacity to adapt? The evidence to date suggests that nations, industries and corporations are yet to fully capitalize on the benefits of the current digital revolution which may well be the single biggest barrier to unlocking the potential of the fourth industrial revolution.

The word Youthquake not only reflected the ethos, mood and preoccupations of 2017, but was also judged as having lasting potential as a word of cultural significance. The forces of Youthquake + Juvenescence are not mutually exclusive, but rather symbiotic. In many ways, they reflect that we are already living in our imaginations.

The changes around us are not only impacting and being impacted by Millennials but by all of us who feel a sense of juvenescence. These changes should empower everyone to think about what role they want to play in adapting their life to a world of accelerated change.