Subscribe Now Get The Financial Brand Newsletter for FREE - Sign Up Now
Do branches deliver better service? Credit union members seem to think so, and it’s got them heading to branches in search of a more personalized service experience.

In TimeTrade’s “State of Credit Unions” survey, nearly half of all respondents (46%) say they visit a credit union branch once a month or more. One in four visit roughly five times during the past year. 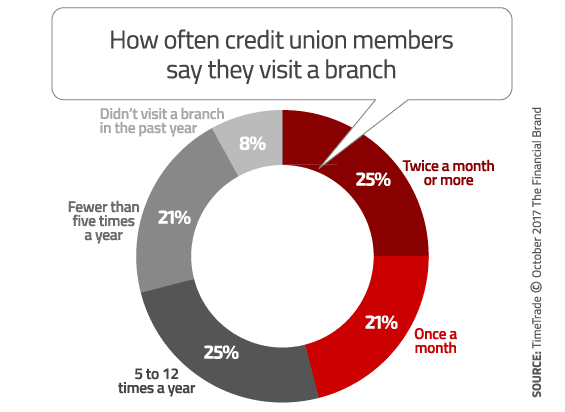 Researchers believe an underlying expectation of quality service is driving the traffic credit unions are continuing to see in their branches.

While they may check their balances or automate payments online, when it comes to weightier financial matters — mortgages, loans, and retirement planning, for instance — participants in the study said they prefer the kind of highly personalized face-to-face experience that can only be found at the branch. In fact, member service and locations/hours were the top two deciding factors affecting people’s decision when selecting a credit union.

Gary Ambrosino, CEO of TimeTrade, says during the next 10 years, banking will become much more human again, emphasizing personal relationships and local connectedness.

Despite all the hype surrounding artificial intelligence and robo-advisors, credit union members say they aren’t comfortable with a tech-heavy banking experience — which is probably one of the primary reasons why they chose a credit union in the first place. More than half (53%) said they wouldn’t even consider using an online-only credit union. And 58% say cybersecurity concerns influence whether they bank online or at a branch.

For now, “personalized service” at the branch means dealing with real humans in a face-to-face setting, not remotely via video chat. When given the choice, two thirds of members say they would rather interact with a subject-matter expert in person than over video.

Just because people prefer branches doesn’t mean there isn’t room for improvement in the brick-and-mortar channel. Waiting for service — whether at the teller window or with a mortgage consultant — is the aspect of branch banking that irritates people most. According to the research, 63% of members wait longer than five minutes for service, and 13% wait more than ten minutes.

TimeTrade says one way that credit unions can provide a simpler and more convenient service is by offering them the ability to pre-book appointments. 62% of respondents say they would prefer to schedule an appointment with a specialist instead of going to a branch and waiting for someone to help them. And almost half of respondents would choose a credit union specifically because it offered the option of scheduling appointments at a convenient time and location.

As online and mobile banking trends provide new options, members will increasingly turn to branches for the complex and specialty services they just won’t trust to online banking. That’s why the future of banking is neither online nor in-person, but rather an integration of both concluded Ambrosino.

“The most innovative institutions are finding creative ways to provide consistent, integrated experiences that move seamlessly from the branch to online,” he says.