Subscribe Now Get The Financial Brand Newsletter for FREE - Sign Up Now
Retail banks and credit unions must push to become people's primary banking provider if they want to create a fertile environment for cross-selling. That's according to a report from the RFi Group based on a massive study encompassing more than 40,000 consumers across 21 markets. Based on the findings, financial institutions must increase levels of digital engagement and address consumers' key switching triggers in order to growth wallet share.

Measuring The Opportunity: Just How Thick Is The Consumer Wallet Anyway?

It’s difficult to craft a cross-selling strategy without first establishing your baseline numbers. Before anyone can set out to increase wallet share, they need to understand what the product penetration rates are today. What’s the starting point? What’s the basis for evaluating success? If you don’t measure the depth of your relationships using metrics like products-per-household, it’s impossible to develop a real cross-selling strategy. And that’s where the RFi Group started its analysis — Exactly how big is the consumer’s wallet? How many banking products are up for grabs?

In RFi Group’s research, product penetration rates varied greatly by country. Consumers globally hold an average of 7.4 banking products across all their various relationships (excluding investments). Consumers in the U.S. have slightly more than the average with 8.5, while those in the UK and Canada are a bit lower (6.5 and 7.1 respectively). On the low end of the scale, Australians hold only 4.9 banking products each. Egypt comes in last place, with 2.6 banking products per person.

Asian consumers typically tend to hold the most banking products, with Taiwan leading the way. In Taiwan, consumers have an average of 13.7 banking products per person — that’s almost twice the global average. Hong Kong consumers have nearly 11 products. 70% of consumers in Taiwan say they have life insurance, compared to just 19% for Australia. 85% of those in Taiwan and 83% in Hong Kong also have investment products vs. 70% in the UK and 68% in both U.S. and Canada.

Digital Engaged Consumers Are Picky, But They Hold More Products

RFi Group studied the level of consumers’ digital engagement and how it impacts a number of key barometers — satisfaction, advocacy, profitability and product penetration rates are all intertwined. For their analysis, they broke respondents into four categories: 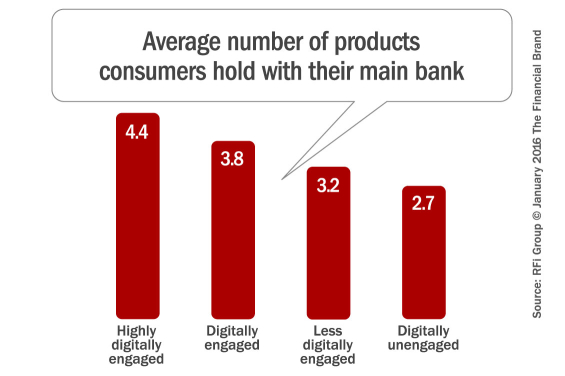 Unfortunately, Digitally Engaged consumers are also among the hardest to please.

“While Highly Digital Engaged customers are more likely to be happy with their main bank, they are also more demanding and keen to try better alternatives,” explains Alan Shields,  Managing Director with Advisory RFi Group. Like magpies they are looking for the next shiny thing and so need to be constantly engaged with digital innovation and functionality. For some banks this will put those consumers in the ‘too hard’ basket. For other, more nimble players, these consumers will represent a huge opportunity.” 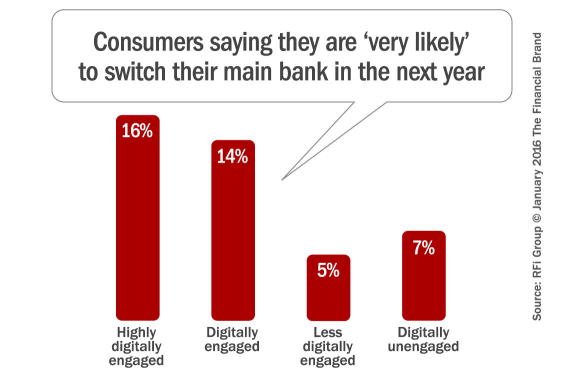 Charles Green, Group CEO at the RFi Group, say the stakes for traditional institutions are as high as consumers’ expectations.

“The consumer is now industry agnostic and the digital value proposition and digital customer experience must compete against all other digital experiences such as Uber and Air BnB,” Green observes. “Not only do consumers increasingly want to be both acquired and serviced digitally but they are significantly more profitable the more digitally engaged that they are.”

“With the rapid enablement of technology, digital disruption and empowered consumers the ability to maximize the profitability of each single customer is critical for banks,” Green continues. “The fintech industry has become more and more sophisticated and successful at challenging the banks, and established financial institutions understand that achieving better cross-sell ratios is crucial.”

According to RFi Group, it is vital that consumers identify their banking provider as their primary financial institution (PFI); these relationships are integral to cross-selling success. Research suggests that main bank customers hold more products than other customers, have longer relationships, and are more likely to consider their primary banking provider for their next product.

This begs a question: How does a banking provider improve its chances of becoming the PFI among the customers they serve? How can banks attain this status? RFi Group singles out four universal factors that drive PFI status:

Frequent Utilization — It is the banking provider that the consumer transacts with most often. How can you increase the volume of interactions, activities and engagement across your customer base?

Recurring Payments — In most of the developed world, consumers use their PFI to pay their regular bills. This means online/mobile bill pay is crucial to establishing a PFI relationship; consumers equate “autopay” with PFI.

Brick & Mortar Convenience — From the consumer’s perspective, their PFI has branches and ATMs near them. Even though the usage of branches and ATMs has been on a steady decline, these channels remain prominent in determining main bank status across most countries. In fact, when U.S. consumers were asked about the criteria they used to choose their current PFI, branch convenience ranked #1 and nearby ATMs ranked #6. This suggests consumers continue to value a bank’s physical presence and the ability to interact face-to-face if necessary, even though they may not regularly use these channels.

Loyalty/Longevity — When consumers look at all their current financial relationships, they identify the institution they have been using the longest as their PFI. So how can you make your products and services more sticky? Do you need a (more muscular) rewards program? How can you reduce attrition rates? If you can reduce the number of customer who leave your institution, you’ll have more people identifying you as their PFI, which, in turn, will improve your overall rate of success with cross-selling.

Hitting Switchers Hard On All Cylinders

Financial marketers need to focus on those consumers who are looking to switch. You have to prevent your customers from leaving and — at the same time — pursue your competitors’ most vulnerable customers. If longevity is a factor determining the PFI status that makes fertile ground for cross-selling, you can’t afford to lose those relationships. And if your competitors have customers up for grabs, you need to go after them — they are the cross-selling targets of tomorrow. In short, you need to identify and plug your leaks while attacking and exploiting everyone else’s.

In RFi Group’s study, respondents in developed markets had fairly high rates of switching, but many of those consumers said they had done so some time in the past. For example, in the U.S. and Canada, 59% and 78% of those who said they switched banks had switched over five years ago. This contrasts with more recent switching behaviors among Asian markets. In Vietnam, for example, 20% of those who had switched did so in the last 12 months. 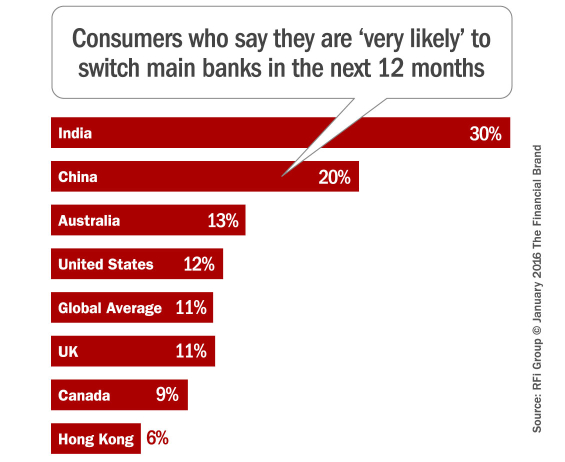 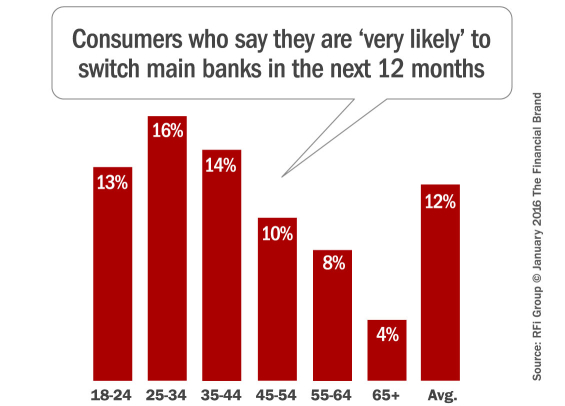 The key for financial institutions when it comes to maintaining and acquiring primary banking relationships is to firstly be aware of individual customer’s life stages then responding with appropriate offers. Banking providers that can anticipate changes in life stage changes and needs is more likely to retain relationships and acquire new ones from other institutions.