With the perceived threat of disruption in retail banking growing due to the influx of tech companies, start-ups and even new banking organizations, the banking industry is responding aggressively to these new threats by increasing innovation investment.

In the 7th Annual Innovation in Retail Banking Report from Efma and Infosys Finacle, which surveyed over 100 retail banks around the world, approximately three quarters (72%) regarded the threat from technology companies, start-ups, retailers and/or telecom players as high or very high.

In response to this perceived threat of disruption, legacy banking organizations are looking at fintech firms in a new light as we discussed in our article. Possibly more important, however, has been the continued global investment by banking firms in the innovation process overall since 2009.

The proportion of banks with an innovation strategy (defined as having clear objectives, processes and measures of success for innovation) has increased from 37% in 2009 to 73% in 2015. When viewing the commitment to innovation from year to year, the proportion of banks increasing their innovation investment over the previous year was 15% in 2009, increasing to 84% in 2015. The biggest increase in commitment to innovation occurred in the period from 2009 to 2011, but there has still been a steady increase in this measure since 2011. 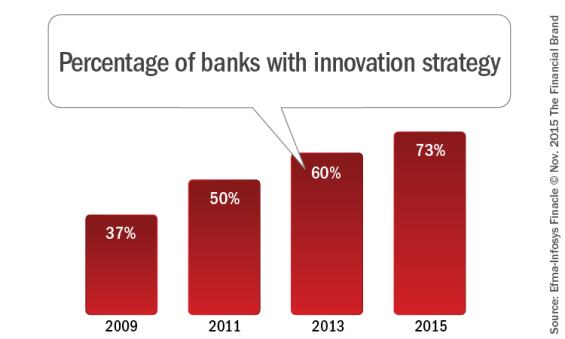 Similar to what was found in the 2014 Innovation in Retail Banking Study, the percentage of banking organizations increasing investments were the most pronounced in the categories of ‘Channels’ (84% in 2015 vs. 89% in 2014) and ‘Customer Service and Experience’ (82% in 2015 vs. 78% last year). While the relative importance of the different areas has changed very little in the last few years, there does appear to be a slight shift in emphasis from channels to customer experience since 2014. 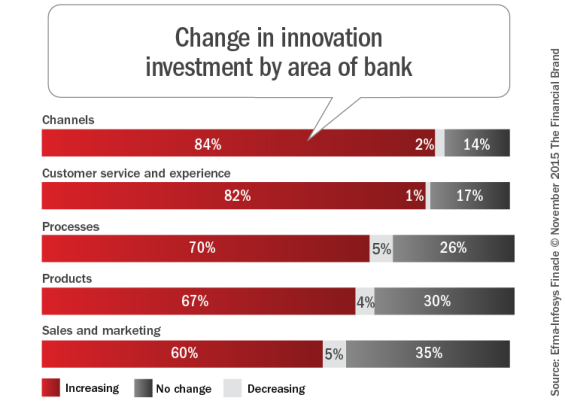 The 2015 survey found a significant divergence in the overall innovation objectives being set by banks worldwide. While 45% indicated a desire to be an ‘innovation leader’, 36% were comfortable being a ‘fast follower’. Interestingly, both of these percentages were lower than last year, as was discussed in our 2014 article on the Efma study. As was noted by this year’s report authors, “Being a fast follower is not necessarily a bad strategy as the first to market is not always the most successful in the long term and you can learn from the mistakes of others.”

According to Patrick Desmarès, Secretary General, Efma, “This year’s global retail banking study demonstrates that banks are eager to innovate, develop formal innovation practices, and increase their involvement with start-ups. This is a step in the right direction, but retail banks must be confident about the value of their innovation investments.”

Michael Reh, Executive Vice President and CEO (Designate), EdgeVerve added, “Digitalization continues to massively shake the business foundations of ‘brick and mortar’ banking institutions. Banks need to proactively disrupt themselves and explore working with innovative start-ups to accelerate change and develop a leading edge in a competitive market. To achieve this, a dual strategy will be critical. Banks need new capabilities to help their businesses grow in new ways. They also need to renew their existing systems, opening them up to benefits of mobility, analytics, cloud computing, and connected systems.”

The Best of Banking Innovation 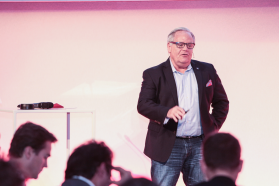 ”It’s interesting to note that since we launched this award program, many of the innovators recognized by these awards in previous years were from emerging markets.”
— Piercarlo Gera, global managing director of Accenture Distribution and Marketing Services

The winners were selected by a combination of votes from a panel of judges comprised exclusively of senior retail bankers from around the world and online votes from Efma members. Between the presentations done by banks from each continent during the innovation summit, and the recap of winning innovations presented in conjunction with the awards ceremony, it is clear that there are banking organizations globally that have a culture and commitment to innovation. As has been the case at many banking innovation awards events over the past several years, several winners were from emerging markets.

“Innovation is the only way for banks to succeed in an industry that is undergoing a profound transformation, and it’s interesting to note that since we launched this award program, many of the innovators recognized by these awards in previous years were from emerging markets,” said Piercarlo Gera, global managing director of Accenture Distribution and Marketing Services. “This new breed of banks is made of players that invest in digital innovation and are making real impact in terms of customer experience enhancement.”

This year’s winners of the Efma Global Innovation Awards were:

Patrick Desmarès, Efma’s secretary general, said, “As we reviewed the 500 innovations submitted this year, we realized that banks are finally entering the age of customer-driven innovation. At a time when competition is intense, banks must offer relevant, personalized and seamless experiences across channels to attract and retain customers. The winning institutions are innovating to provide a better customer experience and develop stronger customer relationships.”

“This year’s winners confirm that banks in all corners of the globe are responding to the universal rise of – and fully embracing – digital, which is absolutely critical today given changing customer behaviors, new regulations and emerging competition from new entrants,” said Gera. “Like with our Fintech Innovation Labs , our objective with this award program is to nurture and foster digital innovation in financial services.”