Mobile banking usage is set to grow exponentially. To respond, banks must overcome structural challenges, reconciling consumers’ appetite for ease of use with the desire for greater security. Boldness will be required, with the consumer being the beneficiary.

After years of relatively limited functionality, the majority of banking organizations finally have some kind of mobile banking offering, either developed in house or in partnership with third-party solution providers. The rapid proliferation of mobile devices has hastened this transformation, with Juniper Research reporting that there were .8 billion mobile banking users worldwide in 2014.

According to the Global Mobile Banking Report, published by KPMG in conjunction with UBS Evidence Lab, this past growth is just the beginning. The number of mobile banking users globally is forecast to double to 1.8 billion over the next four years, representing over 25% of the world’s population according to KPMG.

The report found that mobile is already the largest banking channel for the majority of banks by volume of transactions, with adoption rates being highest in so-called developing countries – reaching 50-60% in China and India – rather than developed nations, such as the US, the UK and Canada. Adoption growth rates within individual countries also show wide variation. 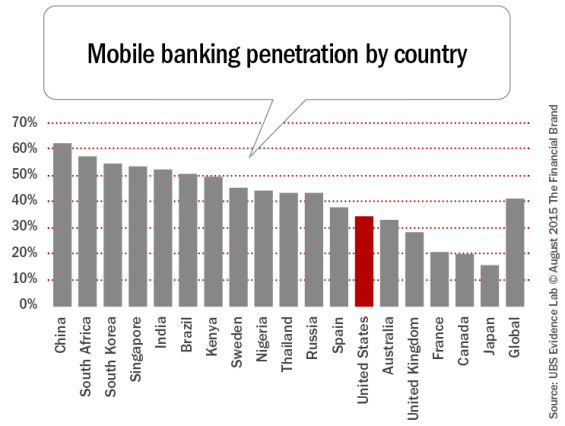 As expected, the research found that the demographic segment represented by those in their mid- to late-thirties is the ‘sweet spot’ for mobile banking, reflecting the convergence of technological savvy and relatively high economic activity. In fact, for developed countries, the average age differential between mobile and non-mobile consumer was usually over 15 years, with the average age difference in developing countries being close to non-existent. This value of these consumers to banking has manifested itself in the pronounced shift from investment in branch networks to more and more overt ‘mobile first’ strategies by banks globally.

The report believes that the continued transaction migration from physical channels to mobile channels will ultimately lead to fewer, smaller digitally-enabled branches and larger hub ‘banking centers’ in densely populated areas. “We do not see mobile banking cannibalizing the branch network completely, but rather an increasing fluidity of bank-customer interaction with devices used in branches to facilitate more efficient services, and person-to-person sales discussions frequently taking place around a touchscreen and teller transactions conducted through tablet computers,” stated the report.

Despite the projection of exponential growth for the next several years, there are challenges being faced by banking organizations globally that could negatively impact both acceptance and usage. These include 1) the need to continually enhance security; 2) the need for a comprehensive mobile strategy; and 3) the need to meet the expectations of an increasingly demanding digital consumer.

Security – As consumers demand enhanced speed, responsiveness and functionality on mobile devices, organizations are being required to authenticate the device, the application and the user, in ways preferred by the customer, and permitted by local laws and regulations. “As mobile becomes the predominant channel for accessing banking services, malware (and increasingly, targeted social engineering) will appear,” the report said.

Strategy – The report suggests that the biggest impediment to profitable growth could come from not having a clear mobile banking strategy or being ineffective in execution – through lack of capability or simply under-investment. The report warns that banks who do not have clear mobile banking strategies will lose customers and cross-sell opportunities in the short-term, as well as risk jeopardizing competitive advantage.

In reviewing global offerings, three categories of mobile banking maturity were presented (Incremental, Transformational and Pioneering), reflecting both the pace of mobile development and the demands of the marketplace. The positioning of any organization is both very fluid and likely to change as organizations leapfrog each other in terms of offerings. 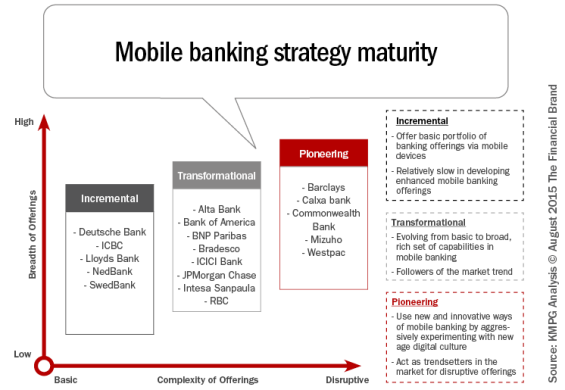 The UBS research data showed the link between effective mobile banking services and higher rates of customer satisfaction and advocacy and that – at least in certain developed economies – there is a negative correlation with the likelihood of mobile banking users remaining with their current institutions. The report hypothesized that this may be because relatively early adopters of mobile banking services are typically more economically active and more technologically savvy, and therefore, more demanding of their providers. 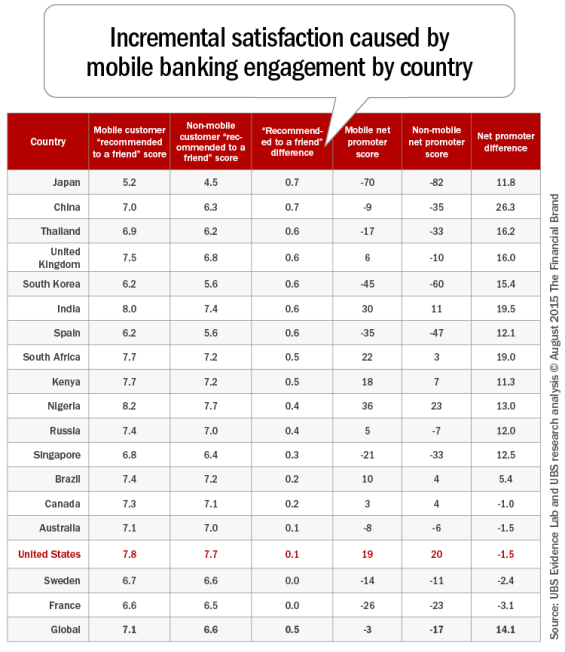 Going forward, the report suggests that mobile banking technology is driving towards an era of ‘Open Banking’, where consumers can bank within context, across a variety of channels, operating systems and devices, including phones, tablets and wearables. It is also believed that banking organizations will continue to promote mobile banking services as they look to retain customers and decrease costs.

The report highlighted three key areas where banking organizations can take advantage of the surge in mobile banking use:

Expand mobile banking offerings – Organizations should continue to pursue the offering of value added mobile services, such as advisory services and virtual customer support. In addition, mobile banking offers the opportunity for improved in-app contextual cross-selling leveraging both captured customer insight as well as locational data. Finally, there is the ability to provide social media banking and ‘life tools’ such as cloud storage.

Open architecture and partnerships – More institutions are beginning to offer Application Program Interfaces (APIs), allowing third-party developers to develop mobile technology. There still is a need to be greater collaboration between the banks and developers according to the report. It was noted that challengers unencumbered by legacy IT infrastructure are already one step ahead, with more entrants challenging legacy organizations in banking’s traditional product offerings. To stay ahead, large banks are increasingly acquiring technology start-ups and investing in incubators.

Investment in security – Banking organizations are encouraged to continue heavy investment in technologies that will evolve and protect against future threats, as well as tackle current pressures from malware and social engineering. Forty percent of consumers cited security concerns, such as providing personal data through mobile devices and the possibility of losing a handset ranks. The balancing act between protecting the consumer while providing seamless and speedy access to services is difficult, with customer satisfaction in the balance. Biometric apps and fingerprint scanning are earmarked as ways to bolster the security of mobile banking while ensuring ease of access.

Reduced costs – Not to be lost in the discussion of expanded offerings, enhanced functionality and the need for improved security is the reality that growth in mobile banking has the potential to reduce the cost of service delivery. While much of the growth in mobile banking use has resulted in incremental transactions (increased balance inquiries, more frequent money transfers, etc.), there is an opportunity to reduce costs as well. 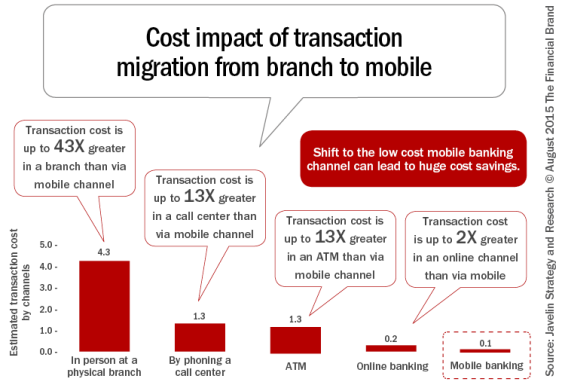 It is important to note, that while there is a significant differential in costs between different channel options, savings can only be realized if the underlying components of the channel being ‘replaced’ are eliminated. In other words, if branch staffing, real estate costs and back office operations can’t be reduced, the positive impact of cost savings from migrated transactions can’t be realized. In addition, numerous studies indicate that transactions are not being replaced on a 1:1 basis.

From an overarching perspective, traditional financial organizations can survive and thrive if they are quick to respond to the market realities. “Banks must adapt or die,” stated David Hodgkinson, KPMG’s UK digital and mobile banking lead and the report’s author. “Mobile banking is clearly supplanting all other channels as the main portal between the bank and the consumer. Many banks have already risen to the challenge and invested in new infrastructure and pioneering initiatives, but others must follow suit and commit to building both immediate propositions and on-going capability to keep up with the pace of change.”

“This new, exciting phase of mobile banking innovation, spearheaded by new market entrants as well as pioneering banks, will be a roller coaster,” he added. “Banks must overcome substantial infrastructural challenges, and reconcile consumers’ appetite for ease of use with greater security. Boldness will be required to overcome these challenges, and the only sure-fire winner will be the consumer.”