There are two predominant explanations for why social media marketing is failing in financial services: 1) poor execution, and 2) wrong strategic context.

The assertion in the title of this post–that social media marketing is failing–will prompt one (or maybe more) of the following responses in people:

If #1 is your primary response, you have rose-colored blinders on. If it’s #4, I don’t know why you even bothered to click on the link to get here, but thanks!

I’m hardly the only one asserting that social media marketing is failing. I could produce a list of sources backing up (or rather, asserting) the claim, but Ad Contrarian has already done that for us. Atomic Tango links to a YouTube video of a Melbourne Business School professor making his case for why social media marketing is a colossal waste of time (which, I must say, I don’t agree with, although I don’t dispute the conclusion).

These findings shouldn’t be a surprise. In a study conducted by the MSR Group, just 2% of online banking consumers said they would be likely to follow their bank in a social channel. Granted, that study was conducted in 2013, and attitudes may have changed dramatically since then. So go ahead and quadruple that number. Wow, 8%.

In a Carlisle & Gallagher study, 87% of consumers said banks’ use of social media was “annoying, boring, or unhelpful.” Ouch. 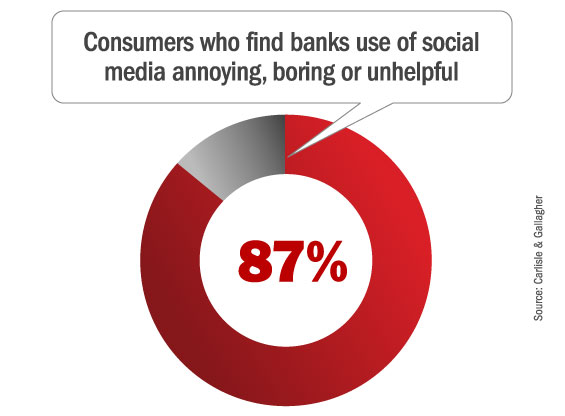 It’s not just a problem in financial services, either. According to [email protected], organic reach of content published on Facebook declined by ~50% in just five months from October 2013 to February 2014. 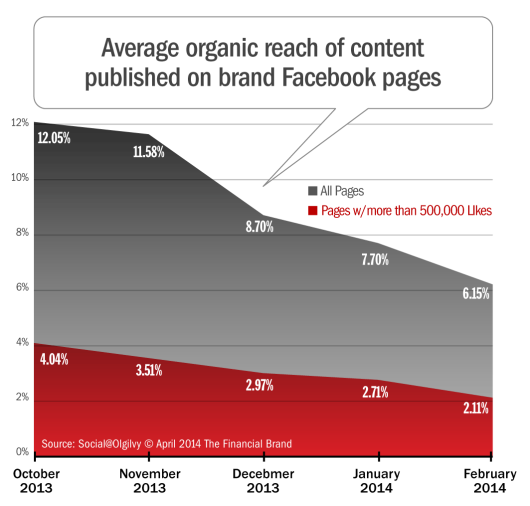 These findings don’t faze the social media delusionists, however. A recent article in Huffington Post (that bastion of academic rigor and soundness) titled Is Social Media in Financial Services a Friend or Foe? the author writes:

“Financial-services companies haven’t placed value on social media, viewing it as the reserve of the young: a fad, almost. There is an opportunity here for companies to seize the opportunity and get ahead of the curve; to improve profitability and manage their reputational risks. This can be achieved by developing collaborative relationships through and around social media, and by policy development between firms and the regulator; between IT, marketing, compliance and the C-suite; and between companies and their customers.”

Cumbaya, my lord, cumbaya. Not a single statistic or example to back up the claim.

Meanwhile, there is plenty of evidence that financial services have placed value on social media. Not only has the annual Financial Brand Marketing Survey found a growing percentage of FIs using social media year over year, but a study from Third Degree found that half of credit union CEOs believe social media is worth doing, and three in 10 believe it’s essential to their engagement efforts. 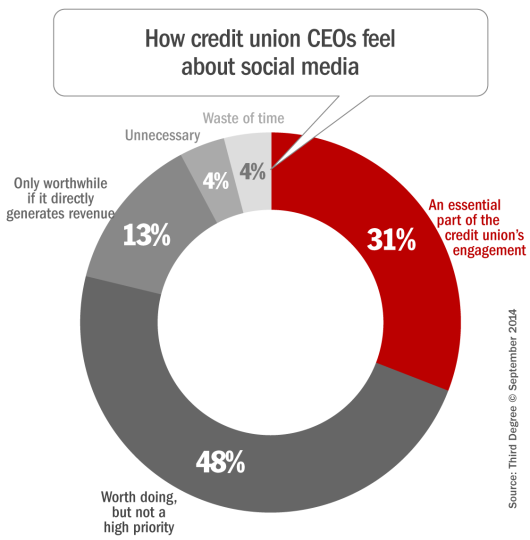 So, sorry ma’am, but FIs do place value on social media–and they do use social media channels–but they don’t see the results you and others promise it will bring about.

The bank ranked #1 in The Financial Brand’s quarterly ranking of banks using social media is Bank of America. It ranks #7 for Facebook likes, and #2 in terms of Twitter and YouTube followers, giving it the overall #1 ranking.

Bank of America, by the way, was the only bank listed in the 10 Most Hated Companies in the US (coming at #5).

Now you might argue that BofA does so many things wrong, that its social media efforts can’t compensate for them.

But that’s exactly the point. If social media presence and involvement can’t compensate for the negative actions, then it simply doesn’t have the impact the social media gurus assert it does.

And if your company does all the other things right (which you might argue that BofA doesn’t), then what incremental benefit does social media involvement provide? Don’t even try to answer that because there’s no way of knowing.

( Read More: Why Social Media Is A Waste of Time For Most Banks & Credit Unions )

Why is social media marketing failing? Is it because it can’t succeed?

As much as I think that many FIs are wasting their time on social media, I don’t think that the answer to that second question is “yes.” There are two predominant explanations for why social media marketing is failing in financial services: 1) Poor execution, and 2) Wrong strategic context.

Poor execution has two flavors to it. In the 2015 Financial Brand Marketing Survey, we asked respondents not just what social media channels they used, but what their marketing objective for using the channel is. Again, the respondents to the survey will receive the report with the full set of data, but I’ll tell you this: There are FIs whose predominant objective for using YouTube or having a blog is to acquire new customers. They may be as deluded as the author of that Puffington Host article.

The second flavor is the real killer: Many FIs–who use social media channels to “engage” their customers and prospects (the arguably “right” objective)–don’t know the difference between “engagement content” and “sales content.”

In Q4 2012, I analyzed the social media approaches of a number of large banks and credit unions. One large bank’s efforts on Twitter demonstrates their inability to engage: Nearly half of its 100 recent tweets were about TIME magazine’s car dealer of the year award; tweets congratulated each of the award nominees. The bank’s financial results were another frequently tweeted topic. Nearly half of the 100 recent tweets of another large FI–very well liked by consumers–were about distracted driving. Football was another popular topic.

Then there was the large bank whose tweets were all about how convenient their branches are. You can probably guess which bank this was.

The point is this: FIs talk about engaging consumers through social media, but really don’t how. Either their messages are irrelevant or too salesy.

The second contributor to social media failure is the strategic context in which too many FIs put social media.

Does your organization have a social media strategy? If you answered “yes,” that might be your problem.

Too often, however, firms with a social media strategy start by asking “what can we do with ___? where the blank is some social media channel. This takes the decision out of the context of the customer lifecycle and other content marketing initiatives.

Social media channels are just that–channels for reaching consumers. By not subordinating the social media strategy to a content marketing strategy, many firms never figure out how to effectively use the channel.

Bottom line: Social media is nothing more than just a low-cost way to reach a large number of people.  There are no magical properties that drive trust or any of the other countless number of benefits that these social media gurus promise.

In the old world of marketing, it was expensive to reach a lot of people–so when you did incur that cost, you had to make sure that each message or communication contributed to an ROI.

But in the world of social media, it costs practically nothing to tweet or put something on Facebook. So we don’t have to worry about the ROI of each message. But figuring out if those messages have an impact at all is difficult. As a result, many marketers feel that their social media efforts aren’t very effective at accomplishing their marketing objectives.

It might just be that social media marketing is harder than traditional marketing.

Whatever the case, I really wish the social media delusionists would just. shut. up.