Threats from payment giants have many community financial institutions willing to offer crypto services and give wealth management another try. Yet a new survey finds they stubbornly cling to their branches, and lag in digital transformation. Talent and willingness to partner may largely determine small institutions' continued relevance.

Banking overall is shedding branches at a blistering pace. U.S. banks reduced their branch count, net of openings and closures, by a record 2,927 branches in 2021, according to S&P Global Market Intelligence. That’s up 38% from 2020, also a record.

The branch closings mainly came from large and regional institutions. A few community financial institutions have reduced their branch footprints, but they were the exception.

A new survey of community banks by accounting and consulting firm Wipfli puts some numbers on this industry split. Of the nearly 200 institutions in 33 states surveyed in November 2021, more than four out of five had not closed a single branch in the last 12 months. And just 5% planned to close a branch in 2022.

This reluctance to stray from their traditional reliance on a physical banking presence was one of the two findings that surprised Anna Kooi, Wipfli’s National Financial Services Leader,. “We knew many community banks were not following the branch-closing trend,” she says, “but I was surprised the percentage was so high.”

The second surprise was small banks’ willingness to embrace cryptocurrency services for their customers. Nearly one in three expect to add a crypto service.

Wipfli, through its advisory work, is well aware of community institutions’ resistance to cut back their branches. It’s a conundrum many wrestle with. The more consumers use digital services, the less they need to come into a branch. Covid only accelerated this long-term trend, and foot traffic has simply not returned as some had expected after the early days of the pandemic, the firm notes in its report.

As one banker told Kooi: “We obviously taught our customers too well how to use mobile banking, because we’re seeing foot traffic decline daily.” Notably the banker worked for an agricultural bank whose client base includes more Baby Boomers than Millennials, the consultant points out.

On the other hand, “these local banks are often the lone financial institutions in their communities,” Kooi states, and a physical presence is deemed essential. “But can they continue to be viable carrying all that overhead?”

The future of branches may depend on how successful financial institutions are at digital sales.

Bankers point out that there are life moments when even younger consumers want to come in and sit down with somebody at the bank. Even so, how long will community institutions be able to resist the trend toward branch closing?

“The answer depends upon what they do on the digital front,” Kooi responds. “If they continue to grow new customers, deposits and loans through digital means — and if they get into other service lines — that will determine whether they can keep the branch alive and use it to help their community-based mission.”

That “murkiness” is reflected in the range of ways respondents defined “digital transformation.” 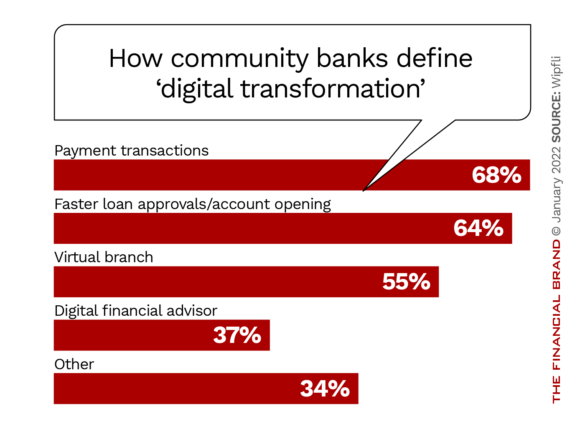 The high position of “payment transactions” isn’t surprising given how aggressively companies such as PayPal, Block (formerly Square), Apple and a host of smaller firms have moved into payments and banking generally. Yet Wipfli urges community institutions to think beyond payment transactions and loan applications if they want to keep up with the digital initiatives rapidly changing the industry.

Based on the responses shown in the chart below, less than half of the community banks in this particular national sample have a definite “path forward” to digital transformation — meaning of course that half don’t. 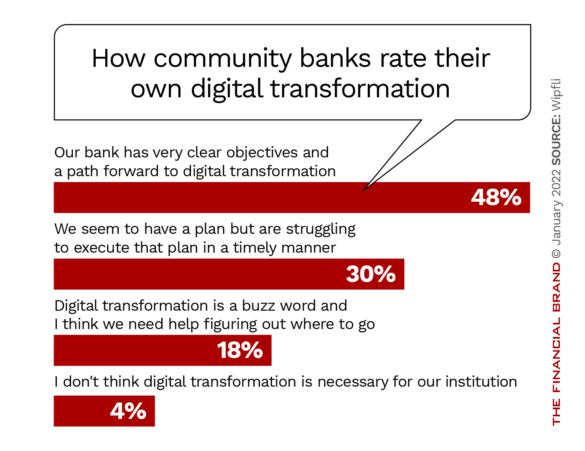 “Let’s be honest,” Anna Kooi tells The Financial Brand, “the younger generations are looking for answers almost instantaneously. They can shop for insurance online and see what their premium will cost across multiple different insurers within three minutes or less.

“That’s why community banks need to really understand what the friction points are for their customers — and then fix them.”

Read More: How One Community Bank is Reinventing Itself for Future Relevance

With the Federal Reserve actively exploring the possibility of creating a central bank digital currency, and Bitcoin having been around since 2009, it shouldn’t be completely unexpected that community banks would be considering getting involved. Yet to have almost 30% expect to add crypto service within 18 months, and 60% say they’re likely to do so is a much stronger response than Kooi anticipated.

Go with the Flow:

The consultant says the surge in interest is partly because customers want their bank to get involved and partly as a way to generate revenue. Some of the services financial institutions can offer include acting as a custodian, paying interest in crypto from a deposit account, paying checking rewards in Bitcoin as Quontic Bank does, facilitating the movement of funds between crypto and fiat currencies. There are third parties out there that will work with financial institutions, Kooi observes.

For most smaller institutions, the main crypto activity right now is getting prepared, says Kooi, which includes determining their risk appetite. When regulation eventually comes, she maintains, traditional institutions can benefit from being a safe, stable place that customers can rely on.

“That’s really the space where banks play,” she observes.

Read More: Banks Are All Fintechs Now (or Soon Will Be)

Wealth Services Are Much More Feasible

The Wipfli survey turned up the remarkable fact that nearly eight in ten community banks had added wealth advisory services in the past three years. Kooi’s take on this trend is that wealth management and trust services typically have required scale, specialized talent and regulatory expertise. But the advent of digital technology, much of it from fintechs, has put these services within reach of smaller institutions.

“The technology allows them to offer the services and do so efficiently, Kooi states. “To the extent that a bank can partner with a fintech or a wealth tech, it can provide advisory services without having to add five financial advisers to the payroll.”

Much the same is true of insurance products. 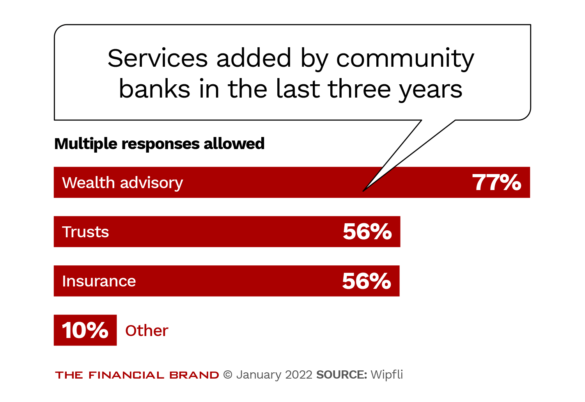 Read More: Banking Must Realign Its Workforce for The Digital Future

Community Banking at a Crossroads

Ultimately Wipfli believes community financial institutions very much have their fate in their own hands. Market forces are inexorably at work to be sure, and certainly the speed and scope of change sweeping the industry is unprecedented, but the firm maintains that a combination of digital transformation and talent management are the keys to remaining relevant.

In ranking their 2022 strategic priorities, survey respondents put the most emphasis on those same two factors. A third priority is developing new revenue streams. 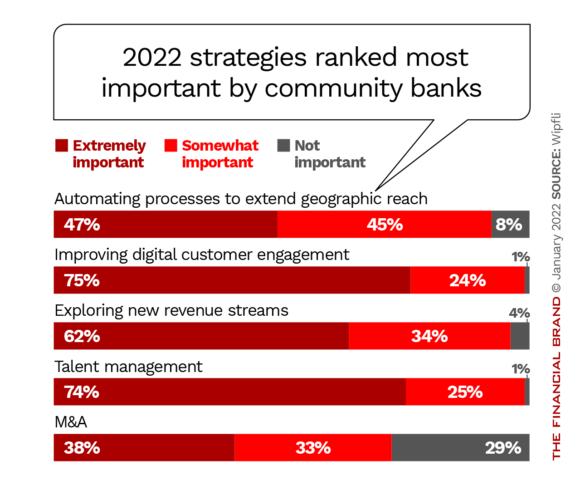 Pushing back against these priorities are a laundry list of concerns identified by community bank executives. Being risk managers by trade and nature, the bankers put “cybersecurity” as their top worry. One bad incident, after all, can undo many well-made plans. 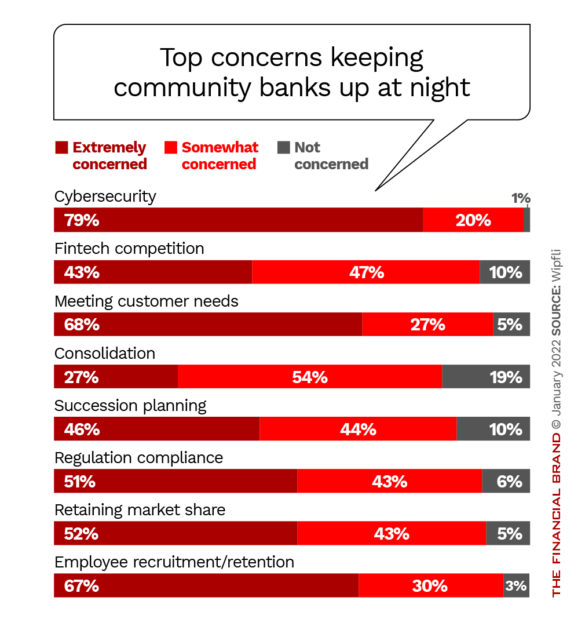 Beyond cybersecurity, meeting customer needs and expectations — a moving target — is a major concern as is the need to acquire and retain talent. The latter is a particular challenge for most community institutions and the Wipfli report offers some specific suggestions, particularly for retaining talent.

Kooi believes that despite the strong headwinds, those community institutions that adapt and find the right strategy, and who are willing to try new models and methods, are going to be successful.