Researchers are finding that 'buy now, pay later' programs may be augmenting other consumer debt, rather than replacing credit cards and personal loans. Some older borrowers also like this reimagined 'layaway plan,' so the trend isn't just about credit newcomers. However, there are indications that some users of these plans are having trouble with installments.

The continuing growth of buy now, pay later financing online and in stores represents a growing source of competition to issuers of both credit and debit cards. Yet it could also be an opportunity — BNPL is already tempting some traditional institutions to jump in as consumer and merchant interest in this hybrid payment and finance mechanism grows.

In addition, there’s a looming possibility that BNPL creates multiple types of risk to both the fintechs that provide much of the service and traditional institutions offering credit cards and unsecured installment loans.

The problem is that the American wallet isn’t bottomless and good times never go on forever. Even BNPL plans that typically don’t carry an explicit interest rate still have to be paid back, and some offerings carry heavy costs for those who miss a payment.

A glimpse of the future? In the U.K., where the buy now, pay later trend is ahead of the U.S., BNPL firms and traditional lenders are waiting to see major regulatory initiatives for BNPL that were identified as a priority at the beginning of 2021.

However, the fledging U.K. budgeting app Claro has taken to the streets, literally, to urge British consumers to ditch BNPL. The firm states that many people there are living beyond their means. Claro has hired billboards and truck-borne advertising — sometimes parked outside BNPL firms’ offices — urging people to “Say bye now to Buy Now Pay Later.” 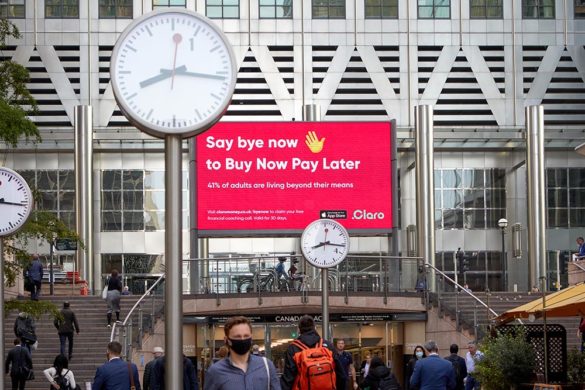 The U.S. Consumer Financial Protection Bureau published a consumer blog in mid-2021 informing people about the potential risks of BNPL programs but has not so far issued any relevant regulation in the wake of that article

Some Facts of Banking Life:

Banks and credit unions have the freedom to sit out a hot new trend, although the urge to build volume and profits is always there. But even if they don’t climb aboard, they often get rocked by the ripple effects.

“Everyone needs more loan growth right now,” says Leo D’Acierno, Senior Advisor at Simon-Kucher & Partners. The massive growth of deposits in U.S. banks during the pandemic has caused a glut that needs deployment. “Banks own the credit card business, but they don’t own the BNPL business,” D’Acierno adds.

In fact, he says, a bank or credit union doesn’t even have to be big to enter the BNPL business, because a major portion of the marketing lies in the merchant’s hands, not the lender’s. BNPL, except as part of a credit card program, relies on presence at the point of sale, either live or online. It’s more of an embedded banking play.

“What a bank does have to have is good relationships with retail business customers,” says D’Acierno, “and those merchants have to be in product lines where the economics are growing and they want to be able to present consumers with additional payment options. The merchants become your marketing channel.”

In this article The Financial Brand explores some considerations of entering this business in light of research by TransUnion, Simon-Kucher and Credit Karma, along with the viewpoint of a major figure in consumer credit.

During a Barclays analysts conference, Richard Fairbank, CEO at Capital One, among the country’s top credit card issuers, said the “impressive growth” in BNPL lending had led to the company’s decision to begin a beta pilot effort in later 2021.

However, in the same conversation Fairbank flashed two yellow lights, one specific to BNPL and one more broadly concerning consumer credit.

Yellow Light #1 is the math behind the plans.

“The elephant in the room is the sustainability of the merchant subsidy,” said Fairbank. “Right now, the merchant is really fully paying for the economics [of BNPL]. The consumer is not paying [the interest]. And it’s a really good time for this particular business, because it is fueled by merchants who believe they are getting incremental volume and will pay a lot for it.”

But as more competitors, including large banks, keep pouring into BNPL, Fairbank says, the increasing competition could drive down the merchant discount rate. For lenders, this would make the results potentially less attractive.

“That could alter how the business works, who pays for the loans and which consumers ultimately choose the product,” says Fairbank.

Fairbank believes that much of BNPL’s growth is coming at the expense of debit cards, though the credit card giant is taking the young channel quite seriously, including launching the pilot. (The pilot will be among a subset of existing customers and current Capital One merchants.)

The banker describes the current environment as “absolutely the best time… for four decades in the consumer lending business.” He contrasts that with some facts about BNPL: “Many of these customers are young. They don’t have credit cards. And their credit performance will be further affected, of course, by whether the product continues to be free.”

Yellow Light #2 is that BNPL and its ripples are growing when consumer credit may be nearing an inflexion point.

“It’s when times are good, and they are really good now, that tends to lead to more aggressive competitive behavior and, often, looser underwriting,” says Fairbank. “The seeds of the next cycle of worsening credit are likely to be planted in this period of unusually strong credit.”

Fairbank says there are signs that many consumer lenders are already beginning to reach for growth. He says many consumers who weathered the Great Recession accumulated credit wisdom in the process. However, while “you’re going to see quite a bit of rationality in consumer behavior,” he says both consumers and lenders are coming out of what he calls “pandemic thinking” — more cautious. While performance right now is good, he says, he believes it reflects a normal cyclical phase and not a structural change in consumer credit markets.

Remember that while it is cool, ‘interest free’ and increasingly available, BNPL is still debt that has to be paid back.

Understanding More about the BNPL Market and How They Use It

TransUnion used its consumer survey — along with some digging in its credit database — to see how much BNPL was eating into the credit card business. Liz Pagel, SVP of Consumer Lending, explains that falling credit card balances have many lenders worried.

TransUnion’s study determined that many consumers who apply for BNPL financing are actively tapping traditional forms of credit as well. 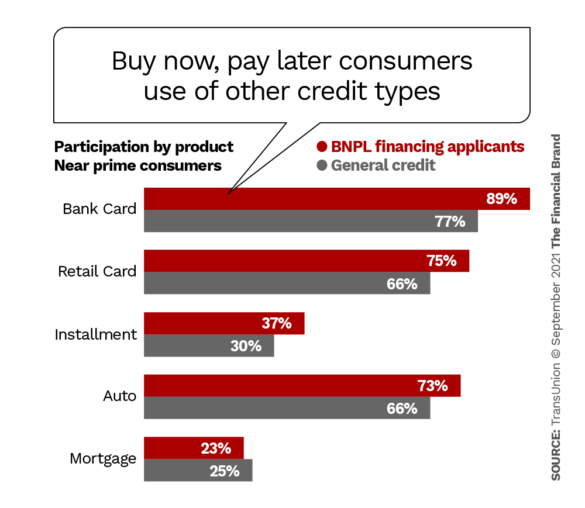 Among near-prime borrowers, the study found, BNPL applicants used more of all forms of credit reviewed except mortgages.

“I look at buy now, pay later as training wheels for unsecured personal loans,” says Pagel. “In time, BNPL should be a great way for people to build credit.”

Right now, she adds, BNPL seems to be feeding segments of the public that are very credit hungry, people who are opening BNPL plans as well as other forms of traditional credit. TransUnion’s research found that BNPL applicants were more likely to be past due on bank cards and retail cards than other consumers. On the other hand, they seem to perform better on unsecured personal installment loans. 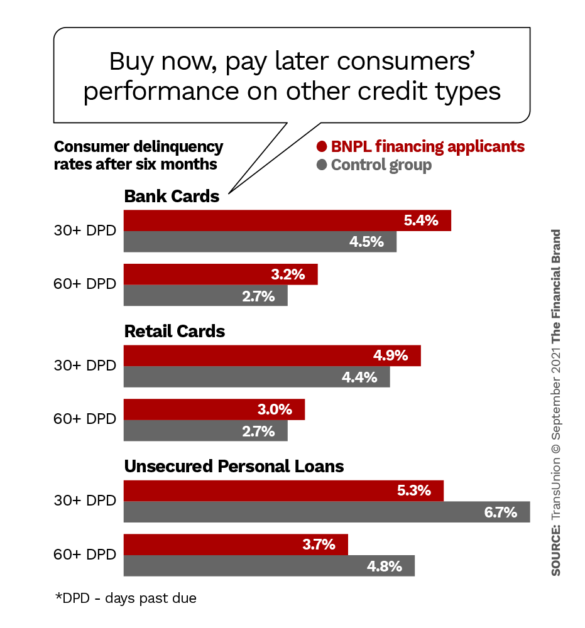 Traditional lenders considering getting into BNPL — and even those who choose to stick to credit cards and more — need to monitor trends in BNPL itself. A study by Credit Karma found that 34% of people who have used BNPL services have fallen behind on one or more payments. (Note that each purchase made via BNPL is a separate loan arrangement, even if they are all with the same firm.)

In addition, the Credit Karma research found that 72% of people who have fallen behind on at least one payment believe it eroded their credit score. (31% of those people said they believed their score dropped significantly.) This may vary according to whether the BNPL company reports to credit bureaus. A selling point for Sezzle, a fast-growing BNPL provider, is that it does not report to bureaus unless the borrower requests that as part of a program it operates with TransUnion.

“I didn’t see any signs yet in the research that consumers are becoming overleveraged,” says TransUnion’s Pagel.

Interestingly, while the TransUnion research confirmed the general impression that BNPL applicants tend to be younger, the trend doesn’t belong completely to the young. Applicants fell into this pattern by age:

TransUnion’s research found that many consumers actively seek to use BNPL plans even when they have credit cards which they could use for the purchase. Taken in tandem with research by Simon-Kucher & Partners, this gives an indication of how powerful the pitch of “interest-free” is.

In a broader study of BNPL, the consulting firm asked consumers how much they would be willing to pay in monthly installments over a year for a TV set selling for $1,000. The findings, reflected in the table below, were expressed in terms of the implicit cost of the credit at those installment dollar amounts. An effective rate of 75% was still palatable for 45% of likely credit seekers surveyed. 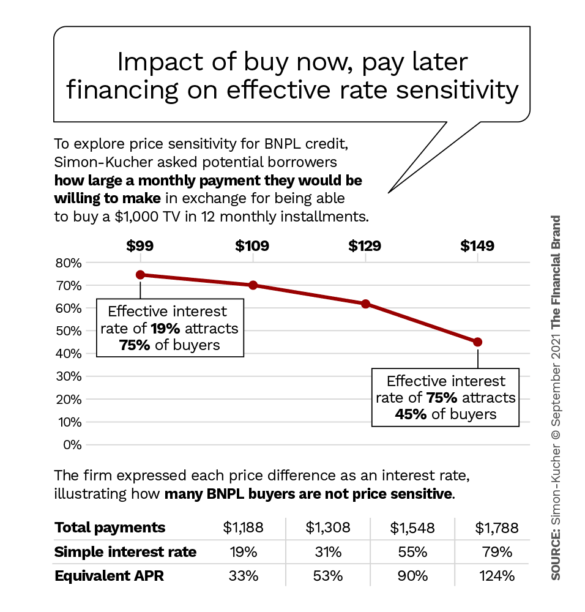 D’Acierno stresses that this was a test of price sensitivity, and not a pricing recommendation. He explains that the research suggests that there is a lot of room for would-be BNPL lenders to devise different plans. By contrast, credit card arrangements with merchants can lead to haggling over basis points, he explains.

“These are still the early innings for BNPL,” says D’Acierno. “We can expect to see substantial increases in consumer adoption. This is like credit cards, 50 years ago.” D’Acierno adds that many areas of consumer products have not yet been infiltrated by BNPL offerings, and that as they are, traditional lenders will see more of their turf disrupted.