The successful marketplace lender is one of the few fintechs to buy a bank. In an exclusive Banking Transformed podcast interview, Scott Sanborn, CEO of LendingClub, details the reasons — and advantages — of its acquisition of Radius Bank (now LendingClub Bank, N.A.), and how the resulting 'hybrid marketplace-bank model,' will leverage the strengths of both in a way other fintechs (and many traditional institutions) only dream of.

Now, deep into the implementation of its Radius Bank acquisition, LendingClub is no longer a fintech without an app.

“We now have a mobile app where people will be engaging with us, ideally, several times a week,” says Sanborn. “That’s going to generate additional data and provide a new platform for us to communicate with our customers.” While that capability is important, it’s small potatoes compared with the potential of marketing insured deposit accounts to a large portion of LendingClub’s base of 3.5 million members.

That prospect should make many competitors stand up and take notice. Not only traditional banks and credit unions, but even successful neobanks like Chime and Varo that so far offer only limited or no lending products beyond payday or cash advances.

LendingClub wants to adapt and enhance its deep client database and its slick decisionmaking platform to turn its 3.5 million members into primary checking account customers.

For competitors, the good news is that the combined company isn’t fully set up yet. But building a new hybrid marketplace-bank model is what LendingClub is working on now after having restarted its lending engine as the U.S. economy recovered in first-half 2021.

The company’s second quarter numbers confirm that the engine is at full speed again after leadership put the brakes on lending in 2020. According to Sanborn, the company’s first full quarter operating as a digital bank was the most profitable in its history. Highlights of the second quarter include:

In a podcast conversation with Jim Marous, Co-Publisher of The Financial Brand and CEO of the Digital Banking Report, Sanborn discusses in considerable detail the reasons behind the Radius acquisition, and the near- and long-term plans the company has to leverage the deal, which became final in February 2021. Marous also probed Sanborn for insights on the importance of scale and LendingClub’s potential for expanding its product platform.

Three Big Pluses for a Fintech Owning a Bank

For LendingClub, pursuing a bank acquisition was driven in large measure by financial reasons. But the decision also had structural and strategic components.

Since its founding in 2006 as a “peer-to-peer” lender, LendingClub has evolved considerably to the point where it is, in Sanborn’s words, “the largest provider of personal unsecured loans in the country.” Without a bank balance sheet, however, the cost of operating at such a huge scale — which involved retaining banks to make the loans on LendingClub’s behalf as well as paying for warehouse lines to enable them to pool loans — was steep. The cost for those two factors alone was about $60 million, Sanborn discloses.

As a bank issuing its own loans and using deposits in the place of warehouse lines, LendingClub nets a 90% reduction in its cost of funds.”

There’s also a revenue component, Sanborn adds. Whereas before LendingClub sold all loans to banks, investors and other players, as a bank it will now keep 15% to 25% of the loans on its balance sheet, adding net interest income as a new revenue stream.

“The revenue we add for loans we hold is three times as much as for the loans we sell,” Sanborn states.

Structurally, the bank acquisition means LendingClub no longer depends on third parties to enable them to issue loans, nor are they vulnerable to a political shift in Washington in which the partner bank/fintech model is condemned.

You would think that as a fintech, LendingClub wouldn’t be constrained in its ability to innovate. But Sanborn explains why that’s not the case:

“When you are not a directly regulated institution, every innovation needs to be approved by your partner banks because it’s their regulatory risk. And then you need to convince your investors.” The company’s new hybrid marketplace-bank model, as Sanborn calls it, allows them to have a direct conversation with the regulators about any new innovation. 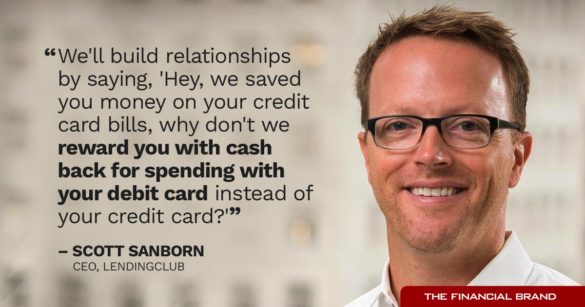 Strategically, and most importantly, says Sanborn, the Radius Bank acquisition “gives us the ability to do more for our customers.”

“We had cracked customer acquisition at scale,” the CEO states in reference to its unsecured lending. Most of the company’s 3.5 million customers are satisfied with LendingClub, he maintains. “They want to do more with us, and having a bank charter enables us to do more for our customer base.”

About half of LendingClub’s customers come back to them for an additional loan within five years.

Building Out the Relationship

During the podcast, Jim Marous asked Sanborn about the cross-selling possibilities of the this fintech-bank combination. Sanborn indicated its still in the early stages of tapping the possibilities, so what he’s describing is more “where we’re going than where we are today.”

Their first task is to adapt their lending technology platform, which allows them to provide seamless, simple, efficient decisioning and personalization to multiple new product categories that being a bank opens up.

Beyond that, Sanborn describes one possible line of messaging they may use with their legacy customers: “Hey, we saved you money on your credit card bills, why don’t we put some of that into a savings account? Why don’t we reward your good spending behavior to help keep you out of debt, as opposed to rewarding you for going into debt with your credit card?”

To bring this new marketplace-bank model to life, says Sanborn, “we will need to find out what value exchange people are looking for to move their primary checking account.” In other words, how to get those 3.5 million loan customers to open a checking account with LendingClub. “It’s all about moving from a single product transaction to a relationship,” the CEO states, “as we start to think about the customer beyond, ‘Do you want another personal loan?’.”

Ultimately, if LendingClub pulls this off, it will have a big advantage over other neobanks, Sanborn believes.

“If you look at us versus some of the other challenger banks, we’re coming at the market from the place where the profit is made, which is lending.” Adding checking and savings to that mix creates a much deeper engagement platform from which to grow.