SoFi has always had designs on extending its reach beyond student loan refinancing and becoming an all-in-one financial provider for consumers. It hasn't been a smooth road, but having just gone public and with a community bank acquisition pending, the neobank has new momentum.

Fintech firms in general have risen to prominence over the last decade by stressing how they operate differently from traditional banks. But perhaps no fintech has positioned itself as so solidly “anti-bank” as San Francisco-based SoFi.

Social Finance Inc. (commonly referred to as SoFi) launched in 2011 as a digital tool designed to help college students and grads obtain more affordable student loan options. It has since grown into a financial services powerhouse that offers a suite of products and even owns the naming rights to an NFL stadium.

During its existence, SoFi has occasionally made waves with its advertising that took on the traditional players directly. You may recall some of their irreverent commercials with its “Don’t Bank” tagline proudly displayed, along with other ads that boldly proclaimed that “The future of banking doesn’t include banks.” 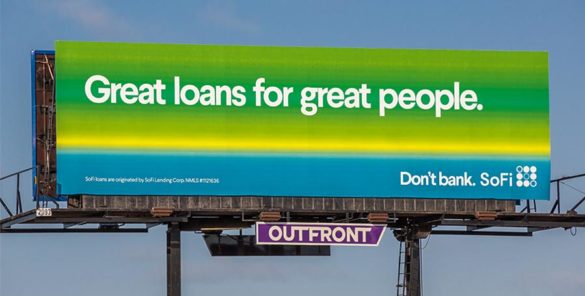 Along the way, SoFi went through 11 investment rounds totaling around $3 billion in funding, per Crunchbase. In the first quarter of 2021, the company announced it would go public via a SPAC merger with venture capital firm Social Capital that valued it at around $8.6 billion.

The company went public on June 1, trading at around $22 per share the same morning. 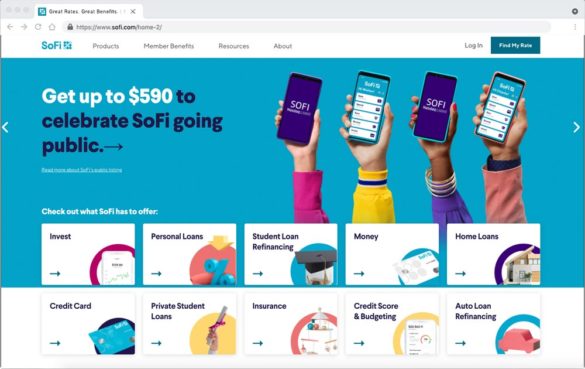 Sleeping With the ‘Enemy’?

Since its inception, SoFi has become more and more like the full-service banks it initially took aim at. The company’s 2017 acquisition of mobile banking provider Zenbanx allowed it to expand beyond lending and offer traditional banking services. In 2020 it acquired payments firm Galileo as well as expanding outside the United States for the first time with the acquisition of Hong Kong investment app 8 Securities.

The company partners with six banks including Metabank, Hills Bank & Trust, EagleBank and Wells Fargo. These arrangements could change in the near future, however. In March, the staunch “anti-bank” went even a step further to becoming a full-fledged national bank when it announced an agreement to acquire California-based community bank Golden Pacific Bancorp for $22.3 million in order to obtain a national bank charter rather than going through the arduous and often time-consuming de novo process to get a charter of its own.

SoFi had already filed for a de novo charter, which will now become a change of control application if this acquisition is approved by the OCC and the Federal Reserve. Completion is anticipated before the end of 2021. The community bank will be renamed SoFi Bank, N.A.

Read More: Why Do Consumers Love Fintechs Like Chime and SoFi?

SoFi’s CEO Anthony Noto said in a press announcement that the Golden Pacific acquisition would both “accelerate our pursuit to establish a national bank subsidiary, as well as begin to expand our offerings in SoFi’s financial products and Galileo’s technology platform to serve local communities.”

“Buying a bank (particularly with conditional approval secured) will likely get SoFi in the market a bit sooner than standing up a de novo bank,” as Michele Alt, partner and co-founder at investment and advisory firm Klaros Group, told Protocol.

With a bank, SoFi can set its own deposit rates and tie together its growing range of lending, savings, checking, insurance and investing products.

Sofi has always had designs on extending beyond student lending and becoming an all-in-one financial provider for its customers. SoFi’s CEO at the time of the Zenbanx acquisition, Mike Cagney, said “We have never been shy about SoFi’s ambitions to become the center of our member’s financial lives. Offering deposits, credit cards, and payment solutions is key to that ambition.”

SoFi currently has 1.85 million members as of the fourth quarter 2020, according to Forbes, and 7.5 million users, per Finovate, and already offers a range of financial products including personal loans, wealth management, investing, insurance, a credit card product and home loans.

In 2019, the company also got in on the crypto craze, partnering with Coinbase to allow its users to trade a select number of cryptocurrencies, including bitcoin, Ethereum and Litecoin.

Perhaps not surprisingly, SoFi’s executive leadership team is made up of veterans from many of Silicon Valley’s most prominent firms. Current CEO Anthony Noto previously served as COO of Twitter after a long career in banking.

As noted, SoFi has long sought to position itself from traditional financial intuitions. It calls its customers “members” and often focuses on aspirational messaging in marketing and advertising materials.

It offers customers such value-added (and Millennial and Gen Z-friendly) services as free coaching from a certified financial planner and free estate-planning services. It produces its own podcast and newsletter and curates third-party content tailored for individual customers.

Though, like other fintechs, it has been embroiled in its share of controversies — including sexual harassment allegations involving Co-Founder Mike Cagney — SoFi continues to focus on its core messaging and targeting upwardly mobile consumers to help them manage their financial lives. “Through it all, SoFi has stuck to the same strategy: Build an aspirational brand that engenders loyalty, and avoid competing with other lending startups on price,” Fast Company notes.

SoFi’s target customers are what it calls ‘high earners not well-served,’ as well as people who have taken out financial offerings from multiple banks.

In SoFi’s estimation there’s a “lack of an integrated one-stop shop on one digital platform” in what traditional banks are able to offer, according to MarketWatch. The feisty competitor positions itself as fulfilling that role.

What Does the Future Hold?

Going forward, one can assume SoFi will continue on its quest to be its customers’ sole provider for every financial need. Now that the company has gone public, it plans to invest even more heavily in acquisitions as it builds out its base of services and aims to become a “financial supermarket” for consumers.

Read More: How This Ex-Apple Card Strategist Is Taking ‘Dave’ to Next Level

In explaining the thinking behind the SPAC transaction, Chamath Palihapitiya, the investor who heads Social Capital, told Pymnts.com he systematically tried to figure out what was broken in banking and what would be the solutions that people wanted.

The financial executive concluded it was three things: “People want low to no fees, they want fair and transparent lending and they want a full suite of products so that you can basically have a one-stop shop,” the investor stated. This list pointed him to SoFi as the company best able to meet those needs.

Whether SoFi can become all things to its customers will be interesting to watch over the coming years.