Subscribe Now Get The Financial Brand Newsletter for FREE - Sign Up Now
While many financial institutions are focusing on the massive amount of digital transformation needed to meet consumer expectations, they ignore the difference small incremental changes can make over time. In the same way that money multiplies through compound interest, the impact of small changes multiply when they are implemented consistently.

With the encouragement of my son, I decided to read the best-selling book, “Atomic Habits: An Easy & Proven Way to Build Good Habits & Break Bad Ones“, by James Clear. A great book, it provides practical strategies on how to master tiny behaviors that lead to remarkable results. The book also provided me some thoughts on how financial institutions can reshape how they think about progress. It also provides tools for digital banking transformation success.

“So often we think that change is about being ambitious. But setting a goal is the easy part,” Clear states. “Excellence is not really about making radical changes. It is about accruing small improvements over time.”  To demonstrate his point, he writes about the British Cycling team, which for almost 100 years had endured a century of mediocrity. The performance of the team was so dismal that only one Olympic gold medal had been won from 1908 to 2003, and no British cyclist had won the Tour de France for 110 years. 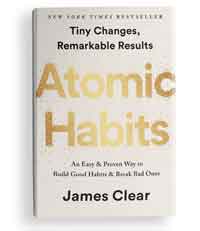 In 2003, a new coach was hired who committed to a strategy that was referred to as “the aggregation of marginal gains,” … searching for tiny improvements in expected and unexpected areas. No adjustment to the norm was considered too small if it could contribute to the success of the overall mission of winning. From changing the design and composition of the bikes, seats, tires and uniforms to modifying the training and diet of the cycling team, hundreds of improvements accumulated with remarkable results.

Within three years, British cyclists won the Tour de France – and then five out of six of the races in a row. At the 2008 Olympic games in Beijing, the team won 60% of the cycling gold medals. Four years later, at the Olympic games in London, the British team set nine Olympic records and seven world records.

The story about the British cycling team is important because it illustrates that while improvements of one percent may not seem like much at the time, they are much more important in the long run. For instance, Clear illustrates that if a person or organization gets 1% better every day for a year, the annual compound improvement is 37%. In other words, if you implement small habits consistently over time, they can be more impactful (and potentially more long lasting, than trying to achieve a major change once.

‘Time magnifies the margin between success and failure.’ This is true for individuals as well as corporations.

Breakthrough Moments Are Not Instantaneous

The challenge to focusing on small incremental changes is that the impact may not be realized for an extended period of time. Sometimes, it is necessary to cross a significant threshold before results are seen. Anyone who has been on a diet understands the frustration of the dreaded ‘plateau’, where no weight is lost for an extended period of time, despite doing everything right. Eventually, progress is made … sometimes to a significant degree. As with any compounding process, the most powerful outcomes are delayed.

In banking, if you put a team in charge of simplifying the digital account opening process for your organization by removing small steps that either cause friction or increase the time needed to open an account, you may not see a change in the abandonment rate initially. This would be especially true if you were simply improving the time it takes to open a new account from 15 minutes to 10 minutes.

‘Atomic’ changes may not result in massive improvements immediately, but the cumulative impact of these small changes will eventually break through the ‘Plateau of Latent Potential’.

But, as your team continues to research the parts of the new account opening process that frustrate a consumer, and change the back office processes that have been in place for decades, eventually your team will break through the ‘Plateau of Latent Potential’. Abandonment rates will decrease, account opening rates will rise, consumer complaints will evaporate and the lifetime value of new customers will escalate. Progress is often not linear.

Legacy Identity Can Sabotage the Ability to Change

Great changes are not the result of great goals … they are the result of great systems (the processes that lead to the desired results). While goals are good for setting a direction, it is the systems and process you use to achieve the goals that matter (like the British cycling team story). This is also why it is so difficult for legacy financial institutions to make significant headway in becoming ‘digital banks’. The way we have always done things gets in the way of the change in processes we need to make to achieve better results.

It is far easier to continue the habits and processes we are familiar with than to form new systems and processes for a digital world. This is why banks and credit unions who have only moved to a 1-2 step onboarding program (simply a ‘Thank You’) continue to follow this pattern despite dozens of studies that show that more is needed to succeed. Changing a set pattern is challenging. But it goes deeper than that … you need to change your entire identity according to James Clear.

Find organizations that you aspire to and use these firms to help you edit your institution’s beliefs, and to upgrade and expand your identity.

It is not enough to want to achieve something (“We want to become a digital bank”). If the leadership and culture of the organization continues to identify itself as a branch-based, traditional bank or credit union, any digital changes will be short-lived and shallow in scope … assuming change happens at all. If you believe your differentiator in the marketplace is your friendly staff, you will have a difficult time realizing that in today’s digital world, a fast and simple app is equated with caring – not necessarily the people in your branch or in the call center.

Remember that change is not easy, and that people who have been part of the organization the longest will often feel the most threatened by change (“Will digital banking eliminate my job?”). It is imperative that employees become part of the overall process.

The Importance of Progress Tracking

Just like individuals use tracking tools to measure progress towards an objective, organizations need to track progress towards their digital transformation goals. James Clear explains the importance of “Don’t break the chain”. Progress tracking is a way to ensure advancement, however small, continues every day. Research shows that individuals or institutions that track progress are more likely to improve than those that don’t.

By tracking, and sharing, progress across an organization, people become aware that everyone is involved in the solution and the outcome. This level of involvement helps reinforce the new culture and helps an organization to recover when progress seems to stop. Organizations must remember, however, that just because something is measured doesn’t mean it is important. Some of the most important progress (brand image, trust, etc.) may be difficult to measure or adequately attribute to an internal action.

Some ‘Atomic Changes’ to Consider

Using the book Atomic Habits as a guide, some changes financial institutions should consider in their digital transformation journey include:

What you want to achieve is tiny changes that will create remarkable results.