Man's best friend can give your social media messaging a cheering boost during tough times. In a world where social platforms have become fraught with negative thinking, profanity, insults, fake news and worse, some banks and credit unions manage to bring a smile to people's faces and even do some good with dogs.

Financial institutions choose all kinds of motifs for logos and other marketing uses, but not many choose animals. One standout through banking history is Hubert T. Lion, a cartoon feline representing what’s now-BMO Harris Bank in ads and “personal” appearances who goes back at least 70 years.

There have been one-offs over the years, especially back in the mists of marketing time when financial institutions gave away stuffed toys for deposits. A memorable quasi-canine was Crocker National Bank’s golden “Crocker Spaniel” stuffed toy, which proved so popular that the bank couldn’t maintain supplies of them.

That was many years before anyone even thought of social media, which continues to challenge many banking institutions. Dogs, man’s faithful companion, have come to the rescue of bank and credit union marketers by giving them something that people want to look at in social posts.

People may not give a hoot about much of what you post. And financial institutions are handicapped because they have to walk a fine line between taste and compliance on one hand and catching the consumer’s eye on the other.

But most humans are drawn to dogs, in all their furry varieties and poses. They make us laugh, often with something that looks like patience on their faces. Much as we often don’t deserve it, they want to please us. And trained aid dogs give examples of service that humans can learn from.

‘A Rare and One of a Kind Breed’

This gallery of bank and credit union uses of dogs in social media imagery, chiefly taken from Instagram and Twitter, opens with the French Bulldog of Studio Bank, Nashville, Tenn. Studio was started in 2018 and uses the breed in its marketing in many different ways.

Why a French Bulldog for an American bank? Here’s how the boutique bank explains it on its website:

“From Nashville’s French roots to the social personality of the dog, our Frenchie is more than just a logo. He’s the perfect mascot to represent our brand — smart, active, adaptable, and bred to be a companion dog. French bulldogs are sophisticated but not pompous. A rare and one of a kind breed.” 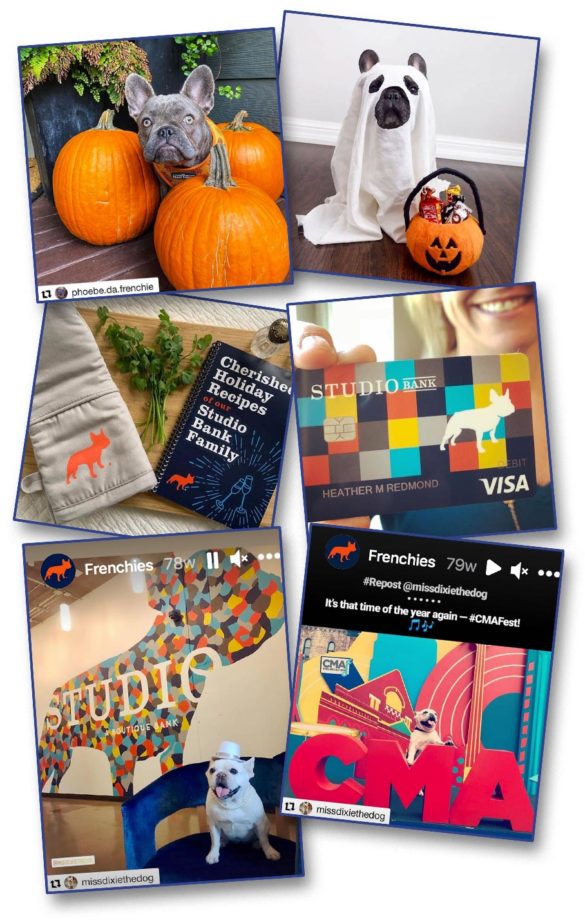 Service Dogs for Those Who Served Their Fellow Americans

PenFed, the second-largest U.S. federal credit union, serves a broad group of military and military family members. Beyond its financial services, it maintains its PenFed Foundation, devoted to helping veterans. In recent years the credit union has also begun working with the Guide Dog Foundation and America’s VetDogs, which provide and train service dogs for disabled veterans and first responders.

Andrea McCarren, a former national TV network Washington correspondent and local investigative reporter, became VP and Chief Content Officer at PenFed Digital in 2019 and brought with her a strong interest in service dogs. She began raising Ace, a yellow Labrador pup, for eventual service work, in 2019. Simultaneously she has been raising Maverick, another yellow Labrador training for service. PenFed works Ace into its social media channels, including updates on his progress and promotion of the nonprofits’ missions. 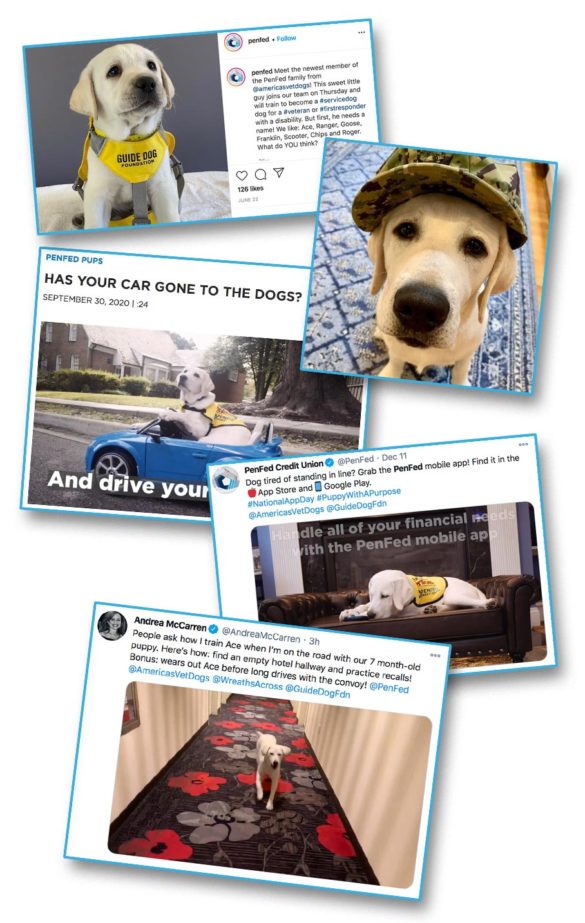 Images of Patient and Present Companions

Honesdale, Penn.’s The Dime Bank doesn’t always put out messages about local canines, but one of its employees couldn’t resist giving this local pooch a smooch. “Randy’s” expression is priceless. 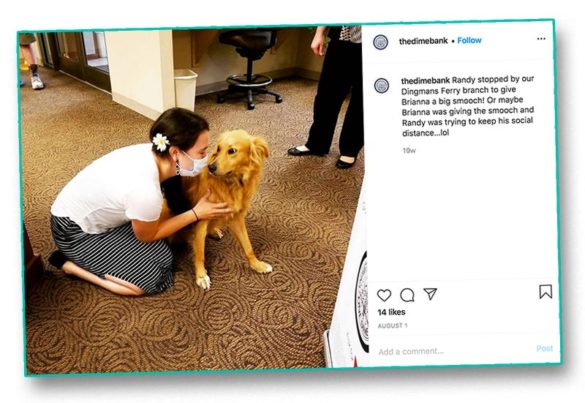 One of over 300 specialty debit card designs available at Arvest. Many feature dogs, other pets and farm and wild animals. 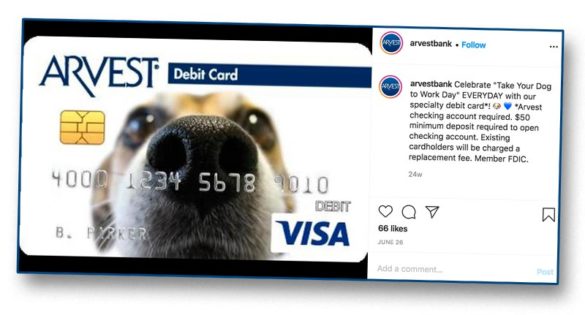 Wells Fargo has used dogs effectively in Instagram posts. The perky little fellow on the bicycle appears in a video in that post and is clearly having himself a time. 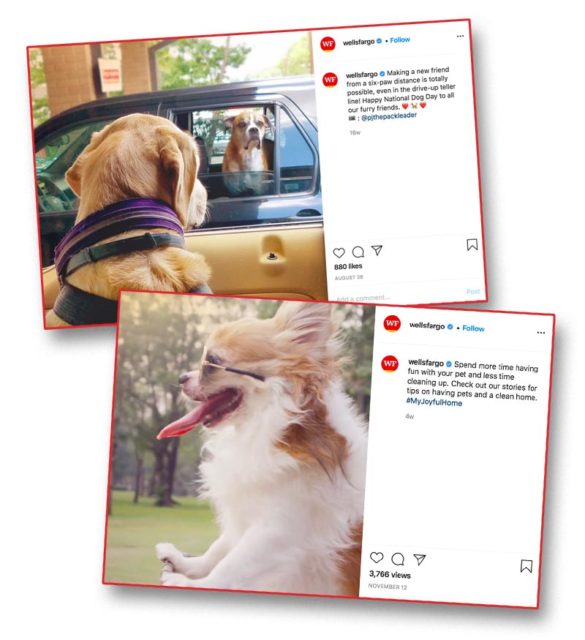 Anyone who cannot smile when they meet a single Golden Retriever is suspect. But anyone who doesn’t grin when they are confronted with seven of these dogs, as in this post from Ireland’s Westport Credit Union, well, they don’t have a pulse. 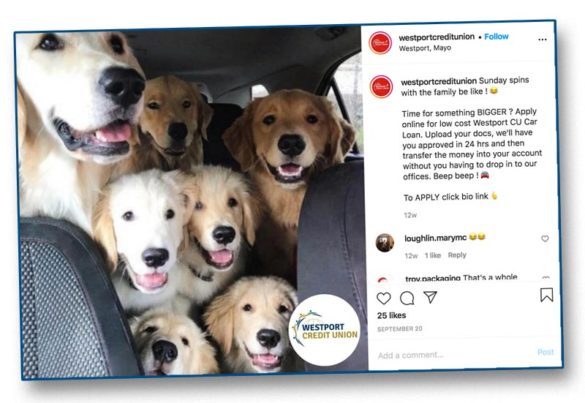 Texas’ Frost Bank has used dogs in many ways, from showing how they take part in public service events to their joy as they greet spring. And, yes, the quadruped at the bottom of the group is a Texas Longhorn, not a dog. We just liked the expression (and the pun). 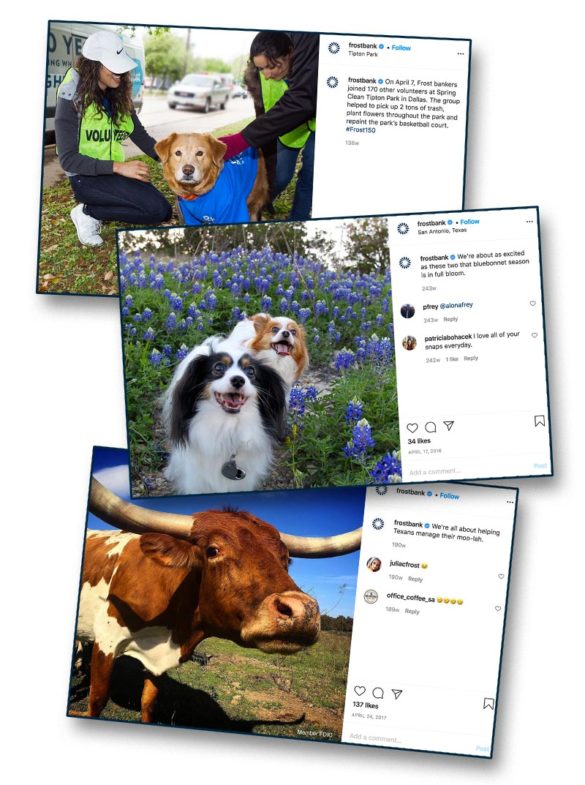 It’s hard to tell which dog is more determined in this shot by North Carolina’s Truliant Federal Credit Union. 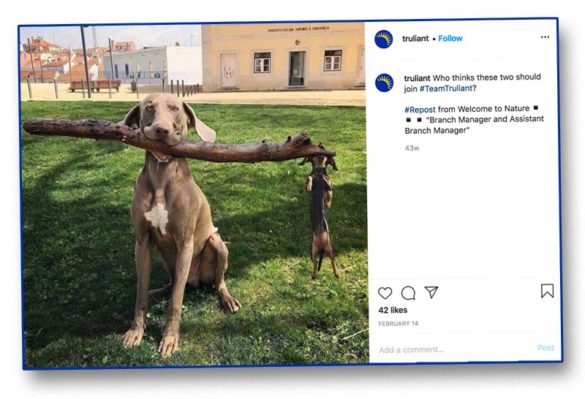 From big gallumpfy canine faces to expressions of interest or curiosity or intelligence, dogs of all sizes engage with us, eye to eye. 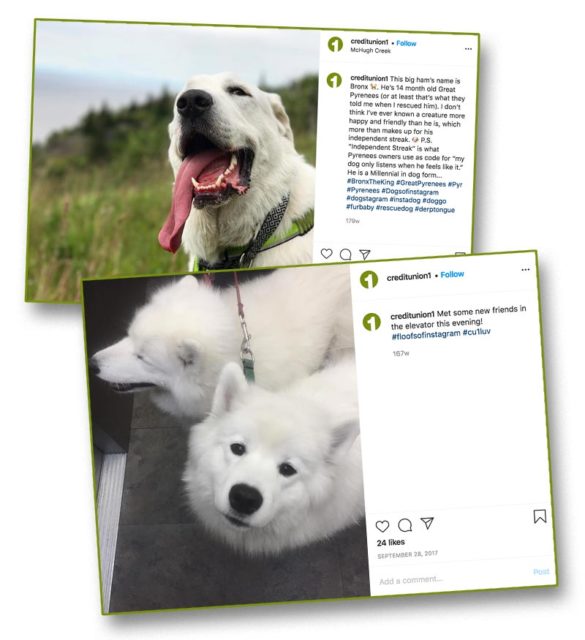 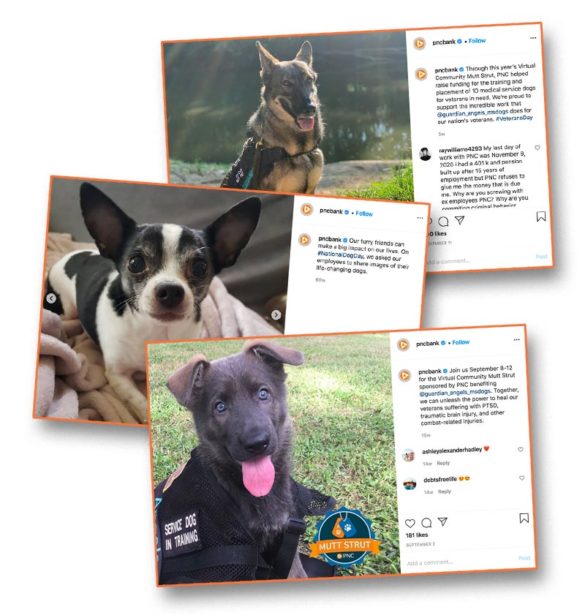 The bright eyes of this pup in a Capital One post during a 2017 game brings back memories of public spectator sports. 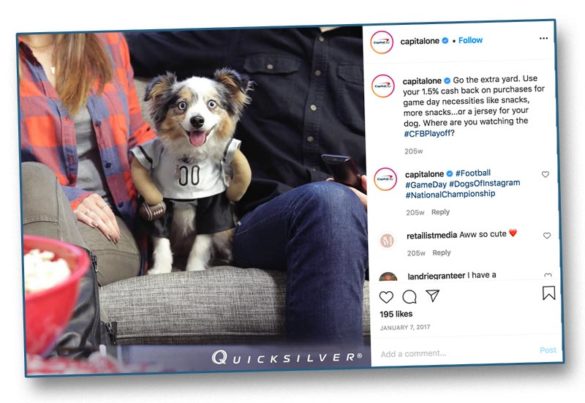 Finally, this post from Massachusetts’ Avidia Bank, a frequent social media poster known for its “Avidia Smarties” program, underscores the enhanced place dogs have had in many people’s lives as they continue to work from home.

Avidia gave equal time to cats in this testamentary post to “our co-worker pets.” 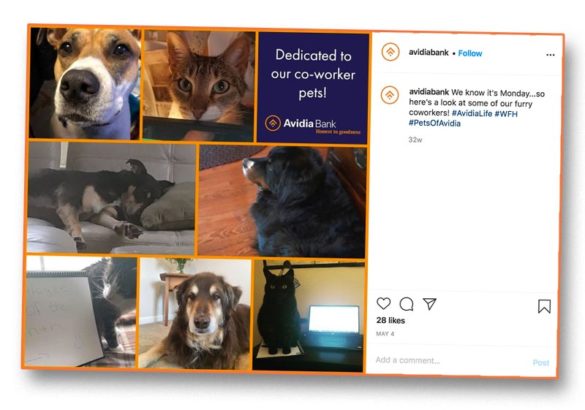 If America ever goes back to its offices en masse, we could learn a lot from these co-workers.