The COVID crisis, leaving aside its larger public health and economic considerations, has been a wake-up call for many financial institutions in regard to digital technology. Banks and credit unions, particularly smaller community-focused institutions, saw what they had to do, and by and large did it quickly and successfully.

The question now: Will they apply that experience to what still needs to be done to remain viable and competitive in a rapidly changing environment?

This theme clearly emerged from new research conducted by the data analytics firm Clear Core under a grant from the National Science Foundation.

“COVID was a natural experiment in business operations and agility,” observes Ray Ragan, Co-Founder of Clear Core. “It took a little of the fear out of changing the status quo and gave financial institution leaders an opportunity to say, ‘We can make these adjustments,’ in the face of a dramatic uptick in use of their digital offerings.”

The research sought to identify the most important challenges faced by community financial institutions, as well as expose the factors most often preventing institutions from resolving these challenges.

The researchers conducted in-depth interviews of mainly middle managers at the vice president and director level at 92 banks and credit unions in 19 states. The interviews took place from mid-July to the end of August 2020, and included institutions ranging from $100 million to $3 billion in total assets.

It’s not particularly surprising that the issue cited most frequently by community financial institutions is the combination of regulation and compliance. The most frequent comments made in regard to this challenge in the survey report were:

Many respondents also noted that “every time a regulation changes … it has secondary effects on the information systems and internal processes.”

“Many of the vendors that community institutions use operate on their own schedules,” Ragan tells The Financial Brand. “So any time there is a regulatory change, there’s a massive orchestration in the technology ecosystem at the institution.”

Challenges two and three — “Technology” and “Data” —were mentioned by almost as many bank and credit union executives as was “Regulation/Compliance.” For technology, three points stood out:

Regarding data, an equal number of respondents mentioned poor data integrity and lack of availability as part of what makes data a challenge. Problems with data integrity relate to the proliferation of information systems, because data ends up being siloed in different systems around the institution, the report notes.

“It seems like each department has their own knowledge center,” says T. “Buck” Strasser, Founder of Clear Core. “That results in a lot of ‘tribal knowledge’ and where the resulting numbers don’t necessarily add up.” (In the charts below, the percentages represent the number of interviewees who cited a particular topic as the “top challenge” or “top roadblock” for their institution.) 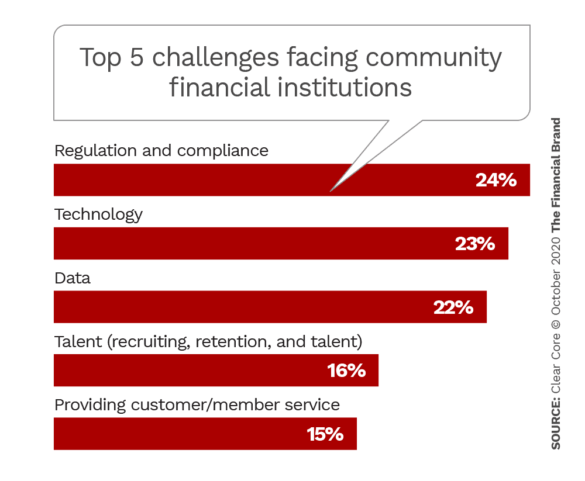 “Talent” was the fourth challenge and includes several related aspects including retention and recruitment. All the respondents said that recruiting is difficult for community financial institutions, particularly for technology talent. Matching pay scales within their market was mentioned by many as making retention difficult, as was the lack of opportunity for career growth in smaller organizations.

The fifth challenge, “Providing customer or member service,” derives primarily from two of the other challenges: compliance restrictions and technology limitations. Both make it difficult to meet customer needs, respondents say.

Read More: How Digital Growth Can Save Banks & Credit Unions from Extinction

What Prevents Dealing with Challenges

Clear Core’s interviewers also asked bank and credit union executives, “What is preventing your dealing with these challenges in the way you’d like?” As shown in the chart below, two of the five roadblocks are repeats of challenges — “Technology” and “Talent.” Strasser observes that almost universally one or the other was mentioned as the roadblock. They either had good people with good ideas but not the technology to implement them, or they had the tech they needed, but didn’t necessarily know how to use it. 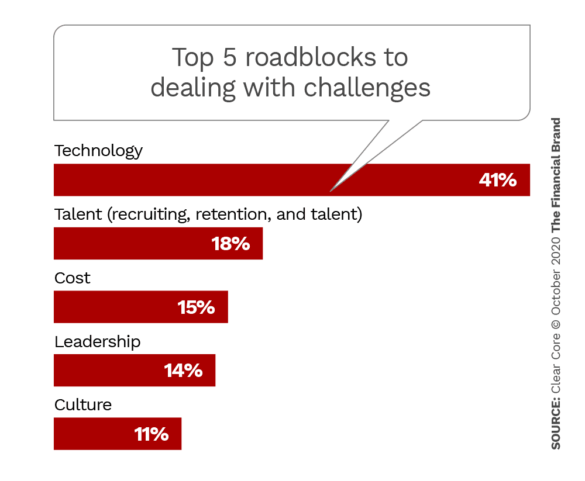 Regarding the “Culture” roadblock, Ragan says that it often amounts to what he would describe as a “status quo bias” — the tendency to want to keep doing business the way the institution had done it previously due to risk aversion generally or fear of running afoul of regulations. In addition, respondents cited departmental silos that prevented collaboration as part of the culture roadblock.

While “Leadership” was not the most-cited roadblock to overcoming challenges, the report notes that slightly more than half the bank and credit union respondents said their leadership was “risk averse and/or indecisive.”

One of the more dramatic effects of the digital transformation of banking has been the emergence of many specialized technology platforms and applications, which has led to increased complexity (and often inefficiency) through sometimes haphazard use of dozens of distinct systems.

“As technology continues to proliferate,” says Strasser, “institutions can reach a point where they have an ecosystem of 60 to 100 different technology systems.”

Typically each department adds new systems and over time community banks and credit unions end up with obsolete systems that are still being paid for. Worse is that “the folks that implemented the system and know how to run it may not be on staff anymore,” Strasser continues, “or the documentation is missing.”

Ragan, who has spent 16 years in the Army Reserve consulting on technology matters, says a comprehensive strategy or plan for the future state of the institution is how to avoid this tech confusion.

“You need to have a strategic vision on how things are going to converge,” he states. Without such a vision, the proliferation of information systems at community banks and credit unions will reach an unsustainable level.

In probing how community banks and credit unions had responded to the COVID-19 crisis, the survey found that nearly all respondents said their institution’s COVID response was effective. Three quarters said that “swift decision-making by leadership” was the key to this.

Does this mark a permanent shift in the conservative and risk-averse leadership culture that the survey respondents said hinders their institution’s ability to meet the various challenges listed above?

Strasser believes that the pandemic may well have forced community banking leaders out of their old ways, which were definitely holding them back in terms of innovation. It showed what they could do, he says.

In pre-COVID planning, Strasser states, department leaders would present the executive team with different numbers and different goals. This both made it much harder to reach a consensus and much harder to have a clear picture of what the data meant. Leaders would tend to rely on experience and gut feeling, which would tend to make them more conservative, says Strasser.

With COVID, bank and credit union executives saw they were capable of making decisions with the information at hand — basically one data set. “They saw the positive results of being more nimble when things changed,” says Strasser, “of not being afraid to shut down a branch and go drive-through-only or digital-only, for example.”
“The credit unions and community banks that are going to survive,” Ragan believes, “will be the ones that are able to take the lessons learned from COVID and apply them going forward.” 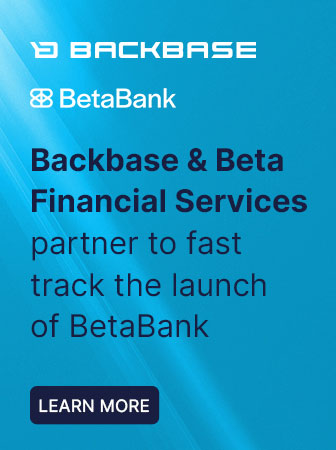