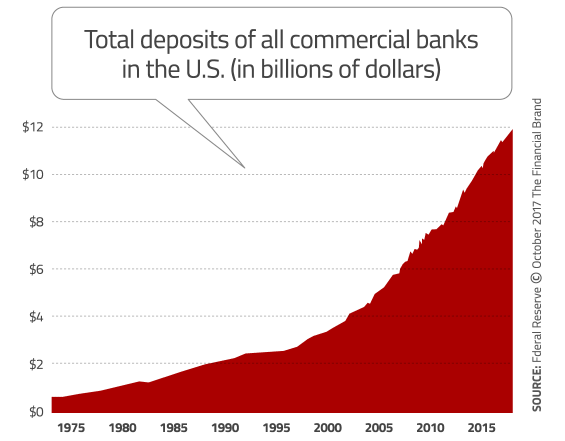 So, all’s well with checking accounts, then? Not quite.

At the risk of sounding like Chicken Little, there is a longer-term trend that will hamper financial institutions’ efforts to keep up the recent pace of growth. I have a name for this trend: deposit displacement.

Here are four examples of how deposits are being displaced from checking accounts:

2. P2P payments. Venmo is on track to do about $35 billion in P2P payments in 2017. While that’s impressive, I’d like to call your attention to something else — the money Venmo users leave sitting in their accounts. A personal source tells us that Venmo has $2.2 billion of funds sitting in users’ accounts—money that isn’t sitting in banks’ accounts. Displacement through P2P payments will only increase, as Apple has announced that its P2P payment tool will park users’ funds in an Apple prepaid debit card, and not in the users’ checking accounts.

3. Retailer mobile apps. In 2016, The Wall Street Journal reported that Starbucks had $1.2 billion in deposits on customers’ loyalty cards. That number is likely more than $2 billion today. As other retailers copy Starbucks’ approach to mobile apps, deposits held in retailers’ mobile apps will continue to grow.

4. Robo-advisor tools. Consulting firm AT Kearney estimates that assets held in robo-advisor tools will reach $2.2 trillion by 2020. While this might point to a business opportunity for banks, it’s also a threat. Kearney believes half of those assets will come from currently non-invested assets—in other words, bank deposits.

And then there’s the Amazon threat. There’s plenty of speculation regarding Amazon’s potential entrance into banking. Although I don’t believe that it actually wants to be or acquire a bank (because it pursues a platform business model) the threat of an Amazon checking is very real. But maybe not in the way that you think.

In a recent survey conducted by Cornerstone Advisors, commissioned by StrategyCorps, consumers were told that:

“Amazon is thinking of offering a checking account. For a fee of $5 to $10 a month, the service will include cell phone damage protection, ID theft protection, roadside assistance, travel insurance, and product discounts.”

43% of Millennials said they would open that account, and about a quarter of them said that they’d close their existing bank account, as well. If that doesn’t surprise you, maybe this will: When asked about their interest in an Amazon checking account — for free, without the bundled add-on services — fewer Millennials were interested.

The Diminishing Importance of Checking Accounts

The checking account is in trouble — not because people are writing less checks — but because of the availability of easy money movement, the absence of any benefit to keeping money in the checking account, and the inability of banks to find a value proposition beyond budgeting and expense categorization capabilities packaged into a PFM offering that simply doesn’t appeal to broad enough set of consumers.

Mid-size banks and credit unions have seen much of Millennials’ deposits flow to the large banks over the past few years. Deposit gathering for all financial institutions will become more difficult over the next five years, as this trend toward deposit displacement accelerates. Combating deposit displacement means reinventing checking accounts.