Subscribe Now Get The Financial Brand's FREE Email Newsletter
Consumers remain satisfied with their primary financial institution, a new survey finds. However, this bond is increasingly fragile, with more consumers likely to switch providers in the next year, either by openly closing accounts or by "invisibly" shifting some of their business elsewhere.

The trend to more fragmentation of consumers’ banking relationships continues, creating a much more complex environment than used to be the case. A Phoenix Synergistics survey exploring loyalty trends in banking revealed that even satisfied customers who are happy to recommend their primary banking provider also have relationships with an average of 3.3 financial institutions. Others won’t hesitate to move their assets should they find better service or a better offer.

What makes this trend even more complex is that in many cases, people aren’t closing out their primary accounts, but are moving funds to Robinhood, Affirm, Chime or elsewhere — an “invisible migration.”

Despite this, the news regarding customer loyalty in many respects continues to be good. Whether this could create a false sense of security is an open question. Here are some of the key findings from the Phoenix Synergistics research, beginning with the positive.

Trust Is the Top Loyalty Driver

Nearly all (94%) of the 2,000 U.S. survey respondents said they have a primary financial institution where they hold most of their assets and conduct most of their financial services. A majority of these consumers (81%) also identify as either “extremely loyal” or “loyal” to that primary financial institution. Respondents cited several reasons for this high level of loyalty, including excellent customer service, a smooth experience and nearby branches, but the top reason — cited by 42% of consumers — is trust in the institution. 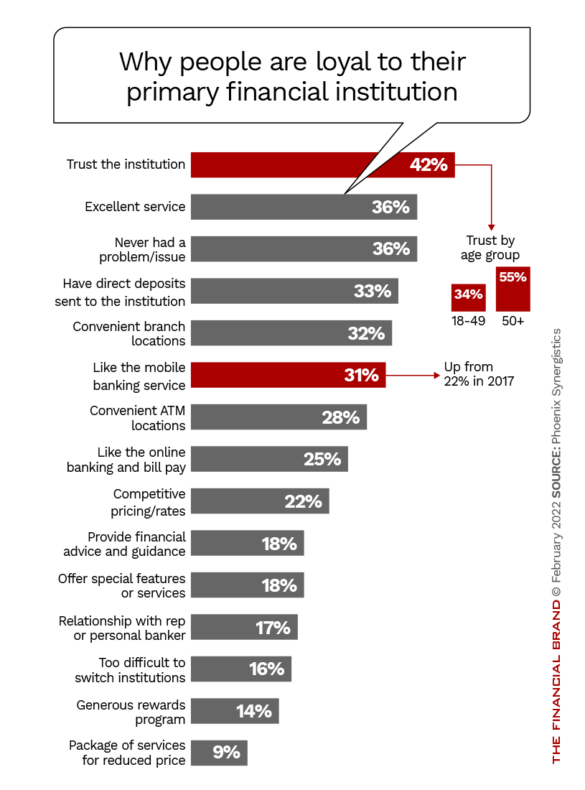 These high levels of trust and loyalty also translate into higher Net Promoter Scores (NPS) and a willingness to be brand advocates, recommending the institution to other consumers, according to the research.

“Being the primary banking provider is still a big deal, and it’s all about people trusting the institution with their own and their family’s finances,” Bill McCracken, President of Phoenix Synergistics, tells The Financial Brand.

Read More: The Future of Loyalty in Banking is at Risk

The greatest benefit of loyal customers is they often serve as brand ambassadors who are highly likely to recommend an institution to others.

More than half (57%) of respondents are promoters of their bank or credit union, while slightly more (59%) say they have recommended it to someone else. Among those who have done so, 35% recommended their banking provider five or more times.

Higher-income and younger consumers are more likely to be brand advocates for their primary banking provider.

Banks and credit unions must continually maintain and enhance customer relationships across the board, but they should focus on the younger segments in particular. “They are doing some great PR for your brand,” McCracken maintains. “It’s the best advertising you can buy, and there are segments within your customer base that are actively promoting you by making multiple recommendations.”

Impact of Interactions on Loyalty

The frequency of interaction with a bank or credit union still plays a key role in customer loyalty. Consumers who interact with their primary institution more often are more likely to report high customer loyalty and satisfaction scores.

Don't be Too Efficient:

More frequent customer interactions with a bank or credit union increases loyalty, so be careful not to reduce those interactions too much in the name of efficiency.

“An excellent mobile interface that encourages more consistent interaction can pay off in securing that loyalty,” he states.

And the Bad News: Loyalty Is More Fragile

Loyalty has never been something any company or individual could take for granted, yet the research reveals that despite overall high levels of satisfaction, customer loyalty with their primary banking provider has become more fragile. This is mainly due to a growing fragmentation in the market. 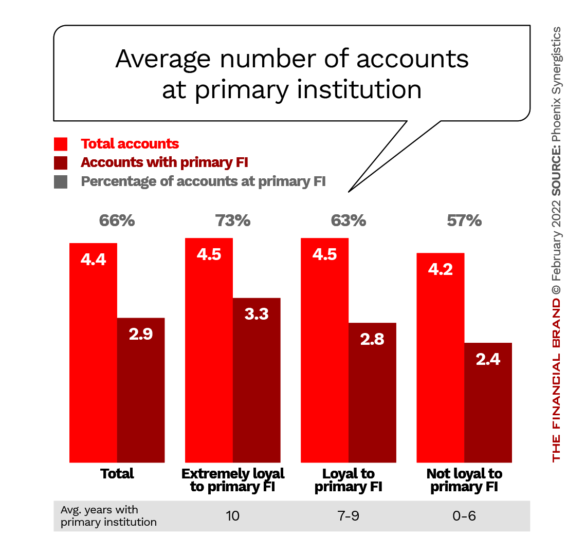 This indicates that banks and credit unions must continually work to sustain loyalty because the ability to switch is so easy now, McCracken notes.

“The reality is there are several other financial institutions in a consumer’s life besides yours and they may have products that are a competitive threat. That’s a huge caveat to saying ‘Our customers are happy and satisfied’.”

While banks and credit unions may equate consumer longevity to loyalty, that’s not always the case. What was notable was that many customers expected rewards for being loyal, with 60% saying they expected a perk for reaching the five-year mark. However, very few banks offer or even acknowledge relationship anniversaries.

“Even just a text saying ‘thank you,’ or a special promotion like extra interest, can go a long way,” says McCracken.

One-Third Are Likely to Switch in the Year Ahead

Customer churn rate in banking has been steadily rising, but now there is increased potential for switching primary financial institutions in the year ahead, particularly among younger and higher-income consumers. Nearly half (45%) say they changed their primary financial institution in the past ten years, with almost a quarter saying they did so more than once, according to the research. Notably, 33% said their household is likely to switch in the next year. 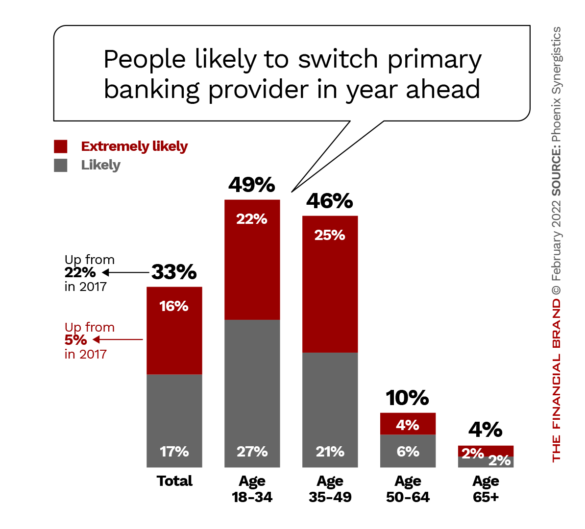 Loyalty and history alone can’t keep these consumers from opening accounts elsewhere. Among “extremely loyal” customers who said they would switch banks in the next year, the top two reasons were to get special features or services and to get financial advice. Banks and credit unions need to ensure they have a broad array of products and that they have partnerships in place to help meet changing consumer expectations. 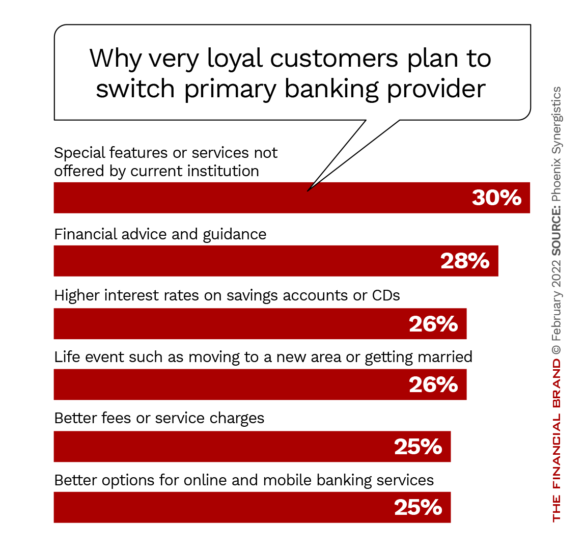 The research data indicates that banks and credit unions could enhance loyalty and satisfaction through financial wellness tools and programs. 60% of respondents say they are aware of such tools or programs at their primary financial institution, and of these, nearly eight in ten say they use at least one of them.

These include financial planning calculators, online dashboards with an overview of the person’s financial picture, incentives and budget planning tools.

“All this falls under the umbrella of interactions,” McCracken observes. “It’s an area where banks and credit unions are falling short, and that has a tremendous impact.”