Even the best of the best among the mobile banking apps of large financial institutions are doing only “C level” work compared to where they need to be. They are especially lagging in the digital money management functions that have made fintech and neobank apps so popular, according to a major consumer study by Insider Intelligence.

The researchers noted in their report, “U.S. Mobile Banking Emerging Features Benchmark 2021,” that they had considerably toughened the yardsticks the annual study uses. Of the 42 features Insider Intelligence set up for evaluation by consumers, 26 were either new or substantially revised to reflect new trends.

“Of the adult mobile banking users we surveyed in the U.S., 87% said that mobile is their primary banking channel. This means financial institutions are increasingly competing — against one another, fintechs, and big tech companies — to attract customers with mobile features.”

The analysis states that mobile banking must be improved not only to solve normal banking pain points, but to improve the overall user experience. A notable example is a mobile app’s ability to handle a consumer’s relationships with external parties, including other financial institutions. Basic functions solely involving handling a consumer’s accounts at their primary institution now rank merely as table stakes.

Thus, while Chase jumped to the top of the Insider Intelligence ranking by five places in the new study, it scored just 71 points overall out of 100, roughly the equivalent of a “C” grade. 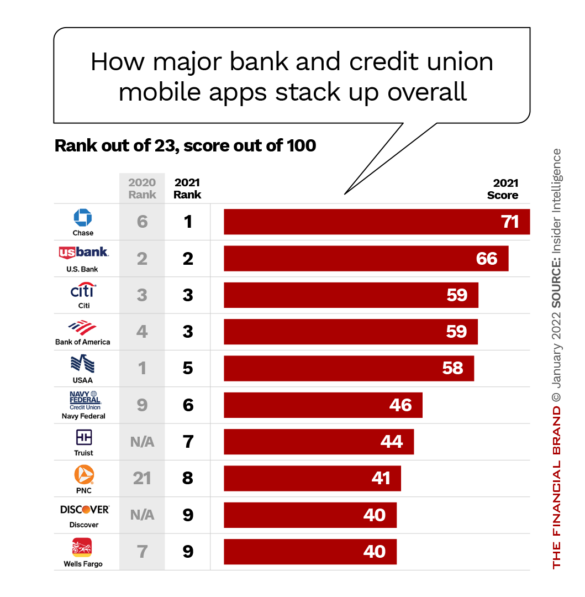 “Only four of the 23 financial institutions in our study scored more than half the points possible,” the report points out. While 11 broke the 50-point barrier in the earlier study, that was under the less-stringent yardstick.

The research looked both at the features institutions include in their apps and at consumers’ perceptions of how well they support each area.

In some other categories beyond digital money management traditional institutions fared better, but let’s look at the problem areas first.

Clearly, an increasing number of Americans run their financial lives from their digital devices. The more help an institution offers through its mobile service, the more likely people opening new accounts or looking to switch primary providers will be to go with them.

However, among the traditional players, “digital money management is a poorly supported category, and one in which fintechs are moving much more quickly,” according to the study. The report noted that though demand is low at present for some of the features studied, two out of the seven were rated as “extremely valuable” by over 30% of consumers sampled. Given the pace of consumer adoption of fintech offerings, other features will no doubt catch up. 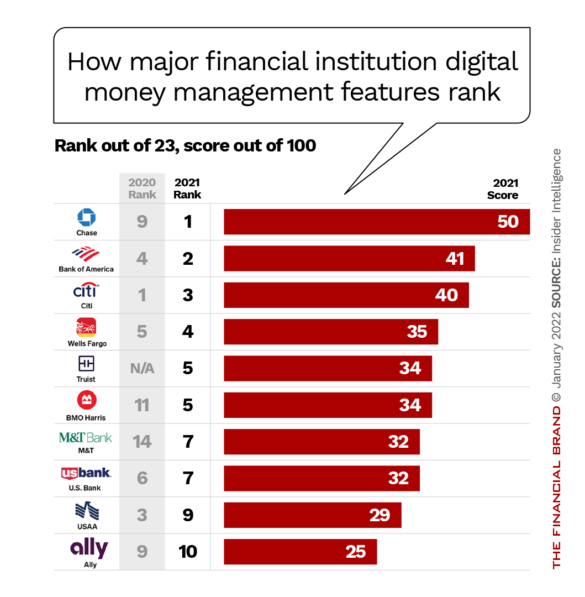 Here is how demand for seven features ranked (the percentages represent consumer who found the feature “extremely valuable”):

• Seeing a list of recurring charges. 32%. This feature pulls together a view of expected upcoming payments.

• Viewing credit scores. 32%. While fintechs such as Credit Karma provide this as a free tool, few traditional institutions offer it at all. “It’s surprising how few financial institutions in our study offered it in their app, given how easy it is to implement,” the report states.

• Cancelling subscription services in-app. 28%. More and more goods and services, from shaving cream and detergent to streaming media, are sold as subscriptions. While some institutions studied provide consumers with a list of the merchants that have stored their payment credentials, none permit the revocation of the ability to charge consumers’ account from within their apps.

• “Pre-flighting” automated transfers to savings that vary based on what people can afford. 27%. Here the researchers gave credit for two distinct functions that use artificial intelligence: 1. predicting cash flows before making transfers to savings, and 2. flagging auto-transfers that consumers may have set up and forgotten about, to avoid overdrafts.

• Viewing balances and transactions at other banks and credit unions from within the app. 26%. Increasingly institutions are moving this into accounts management functions rather than keeping it in a separate personal financial management section.

• Weighing projected income and expenses to see how the account balance will be affected. 19%.
• Setting daily spending limits. 17%.

The report characterized the first two categories — lists of recurring charges and instant credit scores — as “low-hanging fruit” that few of the institutions studied offer yet.

More Articles from The Financial Brand about Mobile Channel:

Safety Features Rank High But Most Players Offer Few of Them

If fintech-like digital money management is the cake of mobile services, then for more and more consumers, features providing safety for their accounts and their financial affairs more broadly are the essential meat. The report says that 37% of consumers surveyed consider security and control features extremely valuable. That is the highest ranking among the six categories.

Yet, according to the report, six out of the top ten institutions offer only two security and control features out of the seven that the study looked at. (This did not include basic card controls because they are considered table stakes.)

A curious omission by all 23 institutions studied is the ability to block contactless debit card payments. In the wake of the pandemic most issuers have introduced contactless cards, the Insider Intelligence research notes, but none of the apps provide for blocking tap-and-go transactions. This is something that 31% of consumers say they would find extremely valuable.

The other six features in this category include (and the percentage of consumers finding it “extremely valuable”):

• Determining if your Social Security number has been compromised. 53%. Of the top ten in this category, only Chase and Capital One offered this much-desired feature.

• Ordering replacement debit cards. 41%. Nearly all institutions in the top ten offer this.

• Confirming a login on an unfamiliar device through the app. 40%. Four out of ten providers offer this.

• Disputing a debit card transaction in-app. 38%. Six out of ten offer this.

• Viewing status of disputes. 36%. Four out of ten offer this.

Chase provided six out of seven features in this category and scored 88 out of 100 for security and control features. Only USAA (68) and Bank of America (52) came anywhere close.

Even though Insider Intelligence completely revamped the standards for this category, nearly all of the top ten for the category offered all alert types. Two institutions — U.S. Bank and Santander U.S. — scored 100s. 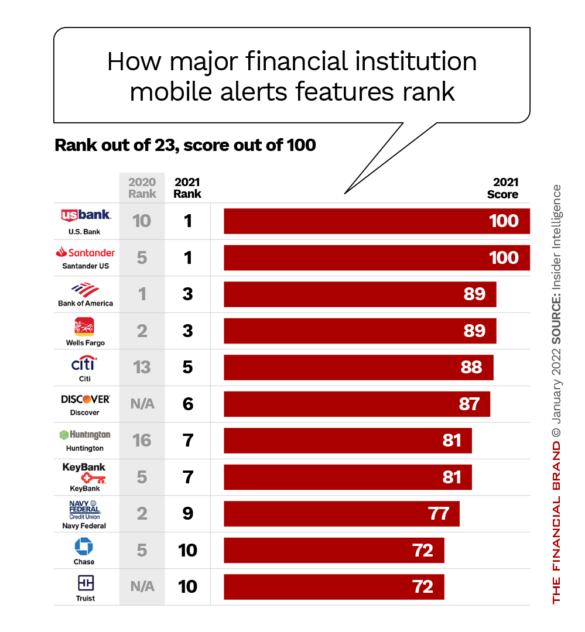 An interesting wrinkle among the seven types of alerts studied is the ability to see a listing of all alerts one’s financial institution has sent. “Consumer wade through a slew of phone notifications every day, making it hard for them to give adequate attention to important messages,” the report explains. Collecting them in one place can help them avoid missing anything important from the primary financial institution. 26% of the consumers consider this “extremely valuable.”

The other six features in the alerts category include (and the percentage of consumers finding each “extremely valuable”):

• Setting alerts for larger purchasers then the consumer generally makes. 34%.

• Setting an alert for when the account balance falls below a chosen size. 34% and offered by the entire top ten.

• Obtaining alerts when funds are credited to an account. 23%.

The report points out that the leaders over the entire study (represented in the first chart of this article) benefited from high rankings in the transfers category. Two exclusives in this category were the ability to set up direct deposits in-app (only Citi and rated “extremely valuable” by 44%) and real-time mobile transfers to an external bank (only Chase and rated “extremely valuable” by 39%). 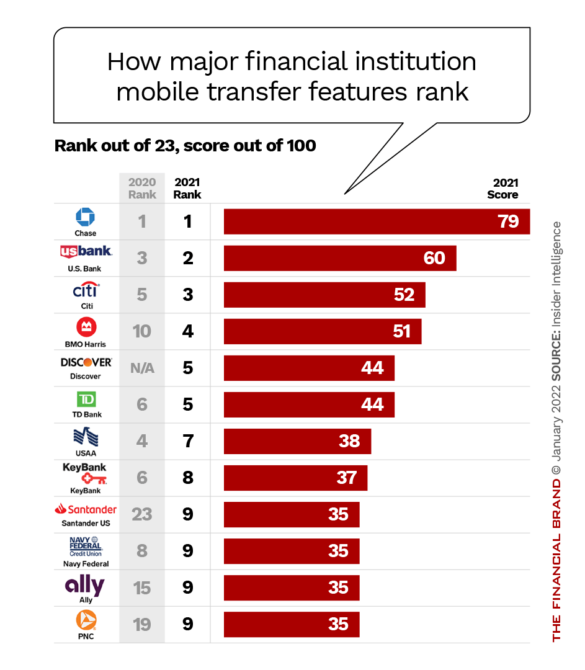 Beyond those two features, five others studied (and the percentage of consumers finding each “extremely valuable”) include: